Our final destiny: Heaven or hell 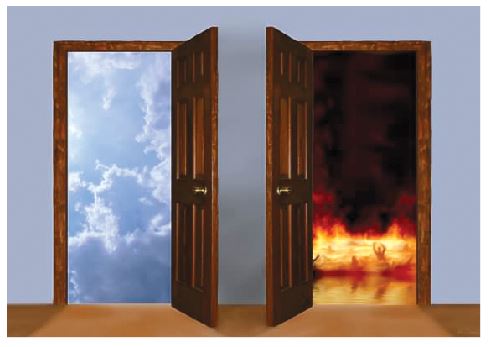 In today’s world that is filled with confusion, it is all the more diificult to follow and stay on the right path, or even know what we should do. One of the greatest legacies of Saint John Paul II was the Catechism of the Catholic Church, published in 1992, which summarizes all that one must know and do to be saved. It is a topic of the utmost importance, since our eternal fate is at stake here: an eternity of bliss with God in Heaven, or an eternity of suffering in hell, separated from God.

207. What is life everlasting?

Eternal life is that life which begins immediately after death. It will have no end. It will be preceded for each person by a particular judgment at the hands of Christ who is the Judge of the living and the dead. This particular judgement will be confirmed in the final judgment.

208. What is the particular judgment?

It is the judgment of immediate retribution which each one after death will receive from God in his immortal soul in accord with his faith and his works. This retribution consists in entrance into the happiness of heaven, immediately or after an appropriate purification, or entry into the eternal damnation of hell.

By “heaven” is meant the state of supreme and definitive happiness. Those who die in the grace of God and have no need of further purification are gathered around Jesus and Mary, the angels and the saints. They thus form the Church of heaven, where they see God “face to face” (1 Corinthians 13:12). They live in a communion of love with the Most Blessed Trinity and they intercede for us.

“True and subsistent life consists in this: the Father, through the Son and in the Holy Spirit, pouring out his heavenly gifts on all things without exception. Thanks to his mercy, we too, men that we are, have received the inalienable promise of eternal life.” (Saint Cyril of Jerusalem.)

Purgatory is the state of those who die in God’s friendship, assured of their eternal salvation, but who still have need of purification to enter into the happiness of heaven.

211. How can we help the souls being purified in purgatory?

Because of the communion of saints, the faithful who are still pilgrims on earth are able to help the souls in purgatory by offering prayers in suffrage for them, especially the Eucharistic sacrifice. They also help them by almsgiving, indulgences, and works of penance.

Hell consists in the eternal damnation of those who die in mortal sin through their own free choice. The principal suffering of hell is eternal separation from God in whom alone we can have the life and happiness for which we were created and for which we long. Christ proclaimed this reality with the words, “Depart from me, you cursed, into the eternal fire” (Matthew 25:41).

The teaching of the Church affirms the existence of hell and its eternity. Immediately after death the souls of those who die in a state of mortal sin descend into hell, where they suffer the punishments of hell, “eternal fire.” The chief punishment of hell is eternal separation from God, in whom alone man can possess the life and happiness for which he was created and for which he longs.

The affirmations of Sacred Scripture and the teachings of the Church on the subject of hell are a call to the responsibility incumbent upon man to make use of his freedom in view of his eternal destiny. They are at the same time an urgent call to conversion: “Enter by the narrow gate; for the gate is wide and the way is easy, that leads to destruction, and those who enter by it are many. For the gate is narrow and the way is hard, that leads to life, and those who find it are few.” (Mt 7:13-14.)

213. How can one reconcile the existence of hell with the infinite goodness of God?

God, while desiring “all to come to repentance” (2 Peter 3:9), nevertheless has created the human person to be free and responsible; and he respects our decisions. Therefore, it is the human person who freely excludes himself from communion with God if at the moment of death he persists in mortal sin and refuses the merciful love of God.

214. In what does the final judgment consist?

The final or universal judgment consists in a sentence of happiness or eternal condemnation, which the Lord Jesus will issue in regard to the “just and the unjust” (Acts 24:15) when he returns as the Judge of the living and the dead. After the last judgment, the resurrected body will share in the retribution which the soul received at the particular judgment.

215. When will this judgment occur?

This judgment will come at the end of the world and only God knows the day and the hour.

391. What does the acceptance of God’s mercy require from us?

It requires that we admit our faults and repent of our sins. God himself by his Word and his Spirit lays bare our sins and gives us the truth of conscience and the hope of forgiveness.

Sin is “a word, an act, or a desire contrary to the eternal Law” (Saint Augustine). It is an offense against God in disobedience to his love. It wounds human nature and injures human solidarity. Christ in his passion fully revealed the seriousness of sin and overcame it with his mercy.

There are a great many kinds of sins. They can be distinguished according to their object or according to the virtues or commandments which they violate. They can directly concern God, neighbor, or ourselves. They can also be divided into sins of thought, of word, of deed, or of omission.

394. How are sins distinguished according to their gravity?

A distinction is made between mortal and venial sin.

One commits a mortal sin when there are simultaneously present: grave matter, full knowledge, and deliberate consent. This sin destroys charity in us, deprives us of sanctifying grace, and, if unrepented, leads us to the eternal death of hell. It can be forgiven in the ordinary way by means of the sacraments of Baptism and of Penance or Reconciliation.

One commits a venial sin, which is essentially different from a mortal sin, when the matter involved is less serious or, even if it is grave, when full knowledge or complete consent are absent. Venial sin does not break the covenant with God but it weakens charity and manifests a disordered affection for created goods. It impedes the progress of a soul in the exercise of the virtues and in the practice of moral good. It merits temporal punishment which purifies.

397. How does sin proliferate?

Sin creates a proclivity to sin; it engenders vice by repetition of the same acts.

Vices are the opposite of virtues. They are perverse habits which darken the conscience and incline one to evil. The vices can be linked to the seven, so-called, capital sins which are: pride, avarice, envy, anger, lust, gluttony, and sloth or acedia.

399. Do we have any responsibility for sins committed by others?

We do have such a responsibility when we culpably cooperate with them.

Structures of sin are social situations or institutions that are contrary to the divine law. They are the expression and effect of personal sins.