No peace without justice - No justice without forgiveness

The World Day of Peace this year is being celebrated in the shadow of the dramatic events of 11 September last. On that day, a terrible crime was committed: in a few brief hours thousands of innocent people of many ethnic backgrounds were slaughtered. Since then, people throughout the world have felt a profound personal vulnerability and a new fear for the future. (...)

Peace: the work of justice and love

I have often paused to reflect on the persistent question: how do we restore the moral and social order subjected to such horrific violence? My reasoned conviction, confirmed in turn by biblical revelation, is that the shattered order cannot be fully restored except by a response that combines justice with forgiveness. The pillars of true peace are justice and that form of love which is forgiveness.

But in the present circumstances, how can we speak of justice and forgiveness as the source and condition of peace? We can and we must, no matter how difficult this may be; a difficulty which often comes from thinking that justice and forgiveness are irreconcilable. But forgiveness is the opposite of resentment and revenge, not of justice. In fact, true peace is "the work of justice" (Is 32:17). As the Second Vatican Council put it, peace is "the fruit of that right ordering of things with which the divine founder has invested human society and which must be actualized by man thirsting for an ever more perfect reign of justice" (Pastoral Constitution Gaudium et Spes, 78). For more than fifteen hundred years, the Catholic Church has repeated the teaching of Saint Augustine of Hippo on this point. He reminds us that the peace which can and must be built in this world is the peace of right order — tranquillitas ordinis, the tranquillity of order (cf. De Civitate Dei, 19,13).

True peace therefore is the fruit of justice, that moral virtue and legal guarantee which ensures full respect for rights and responsibilities, and the just distribution of benefits and burdens. But because human justice is always fragile and imperfect, subject as it is to the limitations and egoism of individuals and groups, it must include and, as it were, be completed by the forgiveness which heals and rebuilds troubled human relations from their foundations. This is true in circumstances great and small, at the personal level or on a wider, even international scale. Forgiveness is in no way opposed to justice, as if to forgive meant to overlook the need to right the wrong done. It is rather the fullness of justice, leading to that tranquility of order which is much more than a fragile and temporary cessation of hostilities, involving as it does the deepest healing of the wounds which fester in human hearts. Justice and forgiveness are both essential to such healing.

It is these two dimensions of peace that I wish to explore in this message. The World Day of Peace this year offers all humanity, and particularly the leaders of nations, the opportunity to reflect upon the demands of justice and the call to forgiveness in the face of the grave problems which continue to afflict the world, not the least of which is the new level of violence introduced by organized terrorism.

The reality of terrorism

It is precisely peace born of justice and forgiveness that is under assault today by international terrorism. In recent years, especially since the end of the Cold War, terrorism has developed into a sophisticated network of political, economic and technical collusion which goes beyond national borders to embrace the whole world. Well-organized terrorist groups can count on huge financial resources and develop wide-ranging strategies, striking innocent people who have nothing to do with the aims pursued by the terrorists.

When terrorist organizations use their own followers as weapons to be launched against defenceless and unsuspecting people they show clearly the death-wish that feeds them. Terrorism springs from hatred, and it generates isolation, mistrust and closure. Violence is added to violence in a tragic sequence that exasperates successive generations, each one inheriting the hatred which divided those that went before. Terrorism is built on contempt for human life. For this reason, not only does it commit intolerable crimes, but because it resorts to terror as a political and military means it is itself a true crime against humanity.

There exists therefore a right to defend oneself against terrorism, a right which, as always, must be exercised with respect for moral and legal limits in the choice of ends and means. The guilty must be correctly identified, since criminal culpability is always personal and cannot be extended to the nation, ethnic group or religion to which the terrorists may belong. International cooperation in the fight against terrorist activities must also include a courageous and resolute political, diplomatic and economic commitment to relieving situations of oppression and marginalization which facilitate the designs of terrorists. The recruitment of terrorists in fact is easier in situations where rights are trampled upon and injustices tolerated over a long period of time.

Still, it must be firmly stated that the injustices existing in the world can never be used to excuse acts of terrorism, and it should be noted that the victims of the radical breakdown of order which terrorism seeks to achieve include above all the countless millions of men and women who are least well-positioned to withstand a collapse of international solidarity — namely, the people of the developing world, who already live on a thin margin of survival and who would be most grievously affected by global economic and political chaos. The terrorist claim to be acting on behalf of the poor is a patent falsehood.

You shall not kill in God's name!

Those who kill by acts of terrorism actually despair of humanity, of life, of the future. In their view, everything is to be hated and destroyed. Terrorists hold that the truth in which they believe or the suffering that they have undergone are so absolute that their reaction in destroying even innocent lives is justified. Terrorism is often the outcome of that fanatic fundamentalism which springs from the conviction that one's own vision of the truth must be forced upon everyone else. Instead, even when the truth has been reached -- and this can happen only in a limited and imperfect way -- it can never be imposed. Respect for a person's conscience, where the image of God himself is reflected (cf. Gen 1:26-27), means that we can only propose the truth to others, who are then responsible for accepting it. To try to impose on others by violent means what we consider to be the truth is an offence against human dignity, and ultimately an offence against God whose image that person bears. For this reason, what is usually referred to as fundamentalism is an attitude radically opposed to belief in God. Terrorism exploits not just people, it exploits God: it ends by making him an idol to be used for one's own purposes.

Consequently, no religious leader can condone terrorism, and much less preach it. It is a profanation of religion to declare oneself a terrorist in the name of God, to do violence to others in his name. Terrorist violence is a contradiction of faith in God, the Creator of man, who cares for man and loves him. It is altogether contrary to faith in Christ the Lord, who taught his disciples to pray: "Forgive us our debts, as we also have forgiven our debtors" (Mt 6:12). 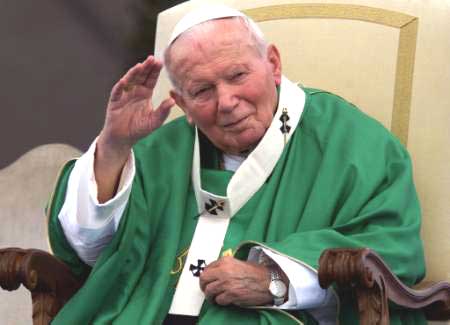 The need for forgiveness

Forgiveness is not a proposal that can be immediately understood or easily accepted; in many ways it is a paradoxical message. Forgiveness in fact always involves an apparent short-term loss for a real long-term gain. Violence is the exact opposite; opting as it does for an apparent short-term gain, it involves a real and permanent loss. Forgiveness may seem like weakness, but it demands great spiritual strength and moral courage, both in granting it and in accepting it. It may seem in some way to diminish us, but in fact it leads us to a fuller and richer humanity, more radiant with the splendour of the Creator. (...)

Reflecting on forgiveness, our minds turn naturally to certain situations of conflict which endlessly feed deep and divisive hatreds and a seemingly unstoppable sequence of personal and collective tragedies. I refer especially to what is happening in the Holy Land, that blessed place of God's encounter with man, where Jesus, the Prince of Peace, lived, died and rose from the dead.

The present troubled international situation prompts a more intense call to resolve the Arab-Israeli conflict, which has now been going on for more than fifty years, with alternate phases of greater or lesser tension. The continuous recourse to acts of terror and war, which aggravate the situation and diminish hope on all sides, must finally give way to a negotiated solution. The rights and demands of each party can be taken into proper account and balanced in an equitable way, if and when there is a will to let justice and reconciliation prevail. (...)

Prayer for peace is not an afterthought to the work of peace. It is of the very essence of building the peace of order, justice, and freedom. To pray for peace is to open the human heart to the inroads of God's power to renew all things. With the life-giving force of his grace, God can create openings for peace where only obstacles and closures are apparent; he can strengthen and enlarge the solidarity of the human family in spite of our endless history of division and conflict. To pray for peace is to pray for justice, for a right-ordering of relations within and among nations and peoples. It is to pray for freedom, especially for the religious freedom that is a basic human and civil right of every individual. To pray for peace is to seek God's forgiveness, and to implore the courage to forgive those who have trespassed against us. (...)

No peace without justice, no justice without forgiveness: this is what in this Message I wish to say to believers and unbelievers alike, to all men and women of good will who are concerned for the good of the human family and for its future.

No peace without justice, no justice without forgiveness: this is what I wish to say to those responsible for the future of the human community, entreating them to be guided in their weighty and difficult decisions by the light of man's true good, always with a view to the common good.

No peace without justice, no justice without forgiveness: I shall not tire of repeating this warning to those who, for one reason or another, nourish feelings of hatred, a desire for revenge or the will to destroy.

On this World Day of Peace, may a more intense prayer rise from the hearts of all believers for the victims of terrorism, for their families so tragically stricken, for all the peoples who continue to be hurt and convulsed by terrorism and war. May the light of our prayer extend even to those who gravely offend God and man by these pitiless acts, that they may look into their hearts, see the evil of what they do, abandon all violent intentions, and seek forgiveness. In these troubled times, may the whole human family find true and lasting peace, born of the marriage of justice and mercy!