Shortly after learning that she was pregnant, Donielle Wilde was told by her doctors that her cancer, which had been in remission for the past nine years, had returned. She and her husband Keith were offered two options: abort the baby, or be subjected to aggressive treatments that could harm the unborn baby. As both of these options were unacceptable to them, they chose instead to protect the life of their unborn child and to trust in the “Will of God”.

The Wildes, who have been married for 17 years, have nine other children all under the age of twelve. They own and operate a concrete business in Summerfield, NC, and, as Donielle recalls, “The beginning of this year was extremely difficult for Keith and me. The business, financial stressors, and 11 of us living under the same roof had us both feeling maxed out. In our minds, we were sure that God had given us all that we could handle.

“However, God would soon reveal that He had other plans. Since we were using NFP (Natural Family Planning), we were more than a little surprised to find out we were pregnant with our 10th child. After sharing our feelings of joy and excitement, we began to wonder how God could think we were able to handle more. But He never let us down before. He always provided for us in the past, and we were confident this time would be no different.”

The Hand of God working wonders

As Catholics, the Wildes believe in protecting the sanctity of human life at every stage and therefore, it was with joy that they accepted the unexpected pregnancy and awaited the birth of their tenth child and fifth daughter. They also chose, in faith, to try see the hand of God in everything. As Donielle put it, ”What better way to imitate Christ than by repeating Our Lord’s own words, ‘This is My Body which I have given up for you’ and then living out those words in love, for Him, with joy in our hearts?”

When Donielle went to her nine week visit to her OB-GYN for a routine ultra-sound, it was discovered that there was a large mass on her ovaries. The tumor was diagnosed and found to be cancerous. Waiting until 16 weeks and safely into her pregnancy, Donielle underwent surgery and had the tumor removed. She and Keith then thanked God, realizing that if it had not been for the tiny new life growing right beside it, this tumor may never have been discovered!

The path the couple was choosing to follow would not be an easy one, but for them, living, “Jesus, I trust in You”, every day, was something that they were already familiar with. “The greatest gift I have ever received is my Catholic faith,” Donielle says. “I thank my parents often for passing this faith down to me. Living out this love for my faith hasn’t always been easy. I have learned it is only in cultivating it that brings about fruition.”

As a family, the Wildes had always prayed together, particularly morning and evening prayers, ending their day with the consecrations to the Sacred Heart of Jesus and to the Immaculate Heart of Mary. Then during Lent they decided to say the rosary together every evening as part of their Lenten prayers. Even though it was often difficult to get through an entire rosary with nine children, the oldest being only 12, they persevered and it did become easier.

After Lent the nightly rosary and consecration continued and the family added special devotions to St. Gianna Beretta Molla and St. Peregrine and also to St. Anthony of Santa Ana Galvão (1739 -1822), a recently canonized Brazilian Franciscan known as a “veritable miracle worker for expectant mothers”.

Their faith is what gave them the strength during this difficult time and all along their “journey” they were supported by family and friends and comforted by a supernatural help.

It was not the usual custom of the Wildes to find out the sex of their pre-born children but this time they felt a need to do so. It seemed necessary, not only because it permitted her children to pray for the baby by name, but also because it “personalized” for Donielle, the life which she was carrying within her.“When it was determined that we were having a girl, Keith instinctively and without knowing the meaning, chose the name of Silvia.” The family learned later that St. Silvia is not only the mother of Pope St. Gregory the Great, but that she is also the patroness of expectant mothers. This was a very reassuring and consoling sign. They then decided on the middle name, Hope, a virtue that they would need to depend strongly upon in the following months.

Doctors continued monitoring Donielle’s pregnancy, determined to deliver the baby as soon as was feasible, so that Donielle could begin the chemotherapy. A cesarean section was scheduled for November 6th, and when that day finally arrived, a healthy Sylvia Hope was delivered by C-section with no complications, weighing 7 lbs., 1 oz.

Though everyone breathed a sigh of relief that all had gone well for the birth, it was still uncertain whether the mother, who had chosen the “Will of God” and so selflessly made the decision to put another human life above her own, would live to see her baby girl grow up.

When only days later both Donielle and her newborn were discharged from the hospital, even the doctors were surprised at how well the mother was healing. “It is unheard of in a patient who, only a few months before, has been diagnosed with stage IV cancer.” said one of her doctors. The scan results of her abdomen showed no signs of cancer. 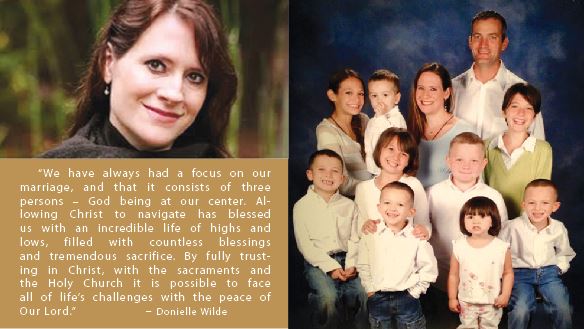 A full body scan and new blood tests were then scheduled for November 21st, in order to determine whether their still remained remnants of the cancer. Once again, friends and family rejoiced with the results, Donielle was “officially” qualified as “NED” (No evidence of disease). The examination was perfect, the blood levels were, according to doctors, “exceptionally good”.

“The prayers have been answered!” Donielle wrote in an email to friends and family, “I’m still completely amazed at the greatness of God, His personal love and mercy! I can not help but sing ‘Glory to God in the highest and peace to his people on earth’! Thank you for your prayers and continued support during these months!.”

All throughout this time of trial for the Wildes, Donielle had insisted on downplaying the heroism of their decision, preferring to emphasize instead, on the message of life and complete trust in God who loves us, “I’ve come to the realization in my own heart that God wants to perform miracles. We just need to allow Him to do so, giving Him enough room to work and ridding ourselves of anything that is not of God, beginning with fear, anxiety and despair.”

In today’s world, so many people often prefer to choose according to their own advantages. A decision such as that of Donielle and Keith, one which is dangerous and potentially life-threatening, is an act of courage. “God wants to restore order.” Donielle continues, “We may not always understand His plan, but we must trust and hope in difficult circumstances. Be at peace no matter what!”