Francis (François), a 56-year-old Frenchman, was about to die of an extremely malignant type of leukemia. Since he was in his death agony, his wife was already choosing the type of coffin and organizing his funeral. However, a miracle happened, attributed to the intercession of the martyr Father Jerzy Popielusko. And, thanks to this miraculous healing, the process of canonization will begin Saturday at Creteil, near Paris, of Blessed Jerzy Popieluszko, better known as the “Chaplain of Solidarność.”

Father and Professor Jozef Naumowicz of the Catholic University of Warsaw, notary in the process of Canonization, announced that he will hear the witnesses in France, and he explained: “This means that the entire process will be carried out in the French diocese and, subsequently, if the Vatican Congregation for Saints’ Causes, after further and careful investigation, confirms this miracle, the Polish priest-martyr will be declared a Saint.”

It all began in 2001, when Francis got sick. The doctors diagnosed “chronic myeloid leukemia in a-typical form” and, from the beginning, they gave him little possibility of a cure.

It was a shock for him – he was still very young, had a good job, a loving wife and three adolescent daughters. He wanted to live; he was being looked after by the best haematologists and world-famous professors.

The illness did not progress rapidly because he had long stays in hospitals, the help of chemotherapy and the abundant use of medicine, but Francis was not being cured.

After 10 years of ever stronger treatments, his body stopped completely. Francis fell into a coma. He was taken to the palliative care unit where terminal patients are kept. The doctors had no more hope; all the treatments had been tried and the illness was not arrested. 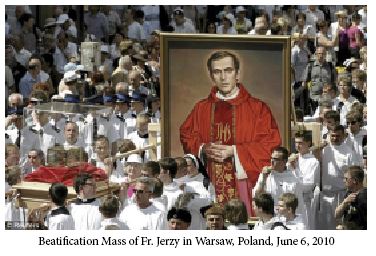 Both husband and wife are believers, formed spiritually in the “Chemin Neuf” community. His wife watched over her husband in coma and she arranged for Francis to receive the Sacrament of the Anointing of the Sick. The doctors told his wife that her husband was about to die and suggested that she take care of all the formalities connected with the funeral.

“I had chosen an oak coffin, recounted his wife, because Francis liked oak wood. At home I began to put his things in order, I tore to pieces the letters that I once wrote to him. There will no longer be a possibility to read them, I thought, and at the same time I felt peace within me. I did not weep, I did not let myself be carried away by panic.”

Up to this point, this is a story that is quite common, although tragic. Every day many people in different parts of the world suffer and die. Francis’s story now takes a dramatic turn as if Someone from on high intervened to write a different scenario.

The “personalities” of this story live in France. The Polish Sister Rozalia Michalitka, of the Congregation of the Sisters of Saint Michael the Archangel, who works in a hospital of Creteil and is in charge of the pastoral care of the sick. She was the one who brought Communion to Francis’ wife at his bedside.

Entering the story also is French priest, Father Bernard, a 65-year-old man, but a priest of only a few months. Previously, Bernard had not frequented the Church for 40 years. In the course of his life he was civilly married and divorced twice. In 2003 he had a profound conversion and, subsequently, entered the seminary and was ordained a priest in April of 2012. In July he went to Poland and while there visited the tomb of Father Jerzy Popieluszko at Warsaw. He was fascinated by this Polish martyr-priest. He “discovered” on the tomb of Father Popieluszko that they were born the same day, month and year: September 14, 1947. This “coincidence” further reinforced Fr. Bernard’s practice of always having on his person both images and relics of Fr. Jerzy.

“I usually have these little images in my pocket to give them to people,” he said.

Both Sister Rozalia as well as Father Bernard remember well that Friday, September 14, 2012, “as if it was today!” they said.

According to the doctors’ estimates these were Francis’ last hours of life. Sister Rozalia suggested to his wife that she call a priest, but the woman explained that her husband had already received the Sacraments, when he was still conscious, so he was ready to die.”

“Despite this, recounted the Sister, I felt interiorly that a priest should come.”

It so happened that in the next room of the same hospital section, a patient was dying and the family had called a priest for the Anointing of the Sick.

Sister Rozalia remembers the sequence of events. “Once again, I went to Francis’ wife saying that a priest would come soon to our section. And she agreed to pray together! It was almost three o’clock in the afternoon, when a priest appeared by the bedside of the dying Francis. It was Father Bernard, the French priest so fascinated by the life of Father Popieluszko. In the presence of Francis’ wife and of the Sister he began to pray for the sick man: he opened a book of prayers and found a photo of Father Jerzy, because he always had his little images with him.

He knew that it was September 14, that is, the anniversary of the birth of Blessed Jerzy. Then he put his image with the relics on the bed where the moribund was lying and said: “Father Jerzy, today is your birthday. If you can do something, do it today. Help us!”

Then he continued to pray in his own words and gave the wife and Sister the text of the prayer for Father Jerzy’s Canonization.

Father Bernard recalls: ”Everything happened spontaneously because I hadn’t prepared anything before, only being close to the sick man, when I was looking for the appropriate prayer, I knew that it was the anniversary of Father Jerzy’s birth and so I began to pray, asking for his intercession.”

Hardly had the Priest and the Sister left and the couple remained alone, than something unexpected happened: Francis opened his eyes and asked: “Where am I?” Then he got up and, as if nothing had happened, he wanted to go to the bathroom alone, but all the devices to which he was attached did not allow him to do so. His wife looked at him incredulously but she thought it was a temporary improvement, before the end.

Obviously, neither Father Bernard nor Sister Rozalia knew what happened after they left the patient’s room. The following day, Saturday morning, the Sister thought of taking Communion to Francis’ room.

“I don’t know why, she said. I knew that Francis was in an unconscious state, that his wife wouldn’t be in the room in the morning because she had to finish the arrangements connected with the funeral and even I had a lot of commitments, but something pushed me to go.”

She went to the hospital, entered the chapel, took the Most Blessed Sacrament, rather instinctively, because she did not know to whom she should give it. Then she went to the room where Francis was lying. She opened the door and saw … the empty bed! Then she thought that perhaps the man had died during the night. But the door of the bathroom was open and she heard the water running from the faucet. “Francis, is it you?, she asked. “Yes, Sister, please come back in twenty minutes, when I have finished shaving my beard and washed myself, then I will be able to have Communion.”

The Sister did not believe her ears. Surprised and somewhat shocked, she left the room immediately. She began to ask if Francis was really alive. She was shocked, because from the medical point of view, he was dying and could not be cured.

After twenty minutes Sister Rozalia returned to Francis’ room. She found him dressed, with his beard shaved, as he had said. They prayed together and she gave him Communion.

“And in this story – says the Sister with a smile on her face - we can see how that not only we act but God also does His part. He intervenes through the intercession of His Saints.”

Subsequent medical examinations evidenced that there was no trace of leukemia in Francis’ body. “Complete remission of the sickness,” they wrote in the report

After Father Bernard’s prayer, through the intercession of Blessed Father Jerzy Popieluszko, on Friday, around 3 pm of September 14, 2012, the Blessed martyr’s birthday, the sickness disappeared.

Francis’ unexpected and complete cure will be carefully examined in the process of Canonization of the Blessed Polish priest.

Canon Law states that to proclaim a Blessed a Saint there must be a miracle confirmed through his intercession, which occurred after his Beatification.