Miracle approved for the Beatification of Fr. Solanus Casey 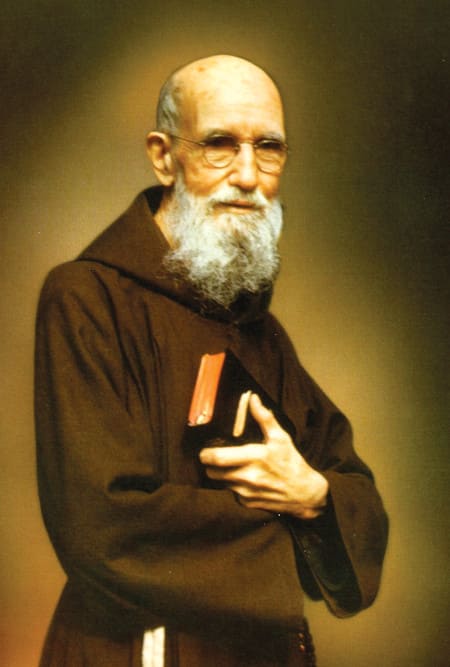 Pope Francis made the announcement that Detroit’s beloved Capuchin friar, Venerable Solanus Casey, “had met the requirements for beatification and will be named among the ‘blessed’”. He is the second U.S.-born male to achieve such a designation, and the first person from the state of Michigan.

Although Fr. Solanus was born in Oak Grove, Wisconsin in 1870, he spent most of his adult life and ministry in the Detroit area, where he cared for the sick, the poor and the downtrodden. He was also a good one for lending a listening ear and a caring heart to the thousands who came to him for counsel, wisdom and aid.

Among the hundreds — if not thousands — of healings attributed to Fr. Solanus during and after his lifetime, Pope Francis recognized the authenticity of one of these miracles, which was a requirement necessary in order for him to be elevated from “venerable” to “blessed”. After a thorough review by the Vatican’s Congregation for the Causes of Saints, which included panels of doctors and some theologians earlier this year, the Pope made the decision for the Beatification to take place on November 18, 2017, in Detroit, MI.

There was a palpable joy at the Solanus Casey Center on Detroit’s east side on May 4, 2017, when Archbishop Allen Vigneron addressed a crowd of journalists and the public. The archbishop reiterated Pope Francis’ announcement from Rome earlier that day: that the Holy Father has confirmed the authenticity of the miracle attributed to Venerable Solanus Casey, opening the door to his beatification...

Fr. Solanus was born Bernard Francis Casey in Oak Grove, Wisconsin, in 1870; but for most of his adult life, he ministered to the people of Detroit – helping the poor, the sick, those in need of advice and comfort.

Young Bernard (Barney) Francis Casey did not have the opportunity to attend school for long. A bout with diphtheria in childhood left him weakened, with a wispy voice. For five years, he attended St. Mary’s School in Hudson, Wisconsin; but when his family moved to Burkhardt, his education was cut short. He worked on the family’s farm in Burkhardt, Wisconsin. When he was seventeen, he left the family farm and began a series of jobs ranging from lumberjack to hospital orderly, prison guard, and street car operator.

It was a brutal crime that refocused Casey’s attention on God and influenced him to consider the priesthood. Casey was driving his car in Superior, Wisconsin, when he witnessed a drunken sailor stab a woman in the street. In January 1891, shaken by what he had witnessed, he entered the minor seminary for the Archdiocese of Milwaukee; but with his limited formal education, he was told that he could not be accepted as a diocesan priest. Instead, he was encouraged to enter a religious order.

He applied to and was accepted by the Order of Friars Minor Capuchin in Detroit where, in 1904, he was ordained a “simplex” priest who could celebrate Mass, but who did not have faculties to preach. Instead, he was assigned the job of doorman or porter at the Capuchin Monastery. In that humble role, he was able to pray, to offer counsel and to lead people to Christ; and so for many in need, his was the face that would greet them when they came to the monastery seeking assistance.

Gratitude for Many Favors

At the Solanus Casey Center, where Fr. Solanus’ body is interred, his tomb is always covered with small slips of paper, on which visitors write their prayers and requests for Venerable Solanus’ intercession. There have been many reports of answered prayers; but since the Church has not formally investigated them, the Capuchins are careful to call them “favors” and not official “miracles.”

Fr. Michael Sullivan, provincial minister of the Capuchin Franciscan Province of St. Joseph, spoke to the gathered crowd on Thursday. “We are overjoyed today,” he said,

...with this announcement that a favor has been endorsed by the Holy Father. We are grateful.

Fr. Solanus gave us an example of mercy. He received all who came to him – he prayed with them, that God might move powerfully in their lives.... He taught us to be joyful, loving, and to open our hearts to the poor.

Fr. David Preuss, OFM Cap., director of the Solanus Casey Center, described the “favor” which has just been recognized as miraculous by the Vatican’s Congregation for the Causes of Saints: A woman suffered from an incurable genetic skin disease. [Paula Medina Zarate, from Panama, suffered from a genetic skin condition since her childhood, called ichthyosis. The condition causes thickened, scaly skin, which cracks and bleeds. She intends to be present at the beatification ceremony in Detroit on November 18, 2017 —Editors note 11/14/17.] While visiting friends in Detroit, she decided to visit Fr. Solanus’ tomb to pray for the intentions of a long list of people who had need of prayer. After her prayers, she felt a nudge internally, urging her to ask for Fr. Solanus’ intercession for herself, as well. Reluctantly, she added her own needs to the list of favors requested; and she received an instantaneous and visible healing. Doctors in Detroit, in Rome, and in her home country [of Panama] have studied the case, and all agree that the healing has no scientific explanation and is, therefore, miraculous. Fr. Preuss said

“There were five doctors to whom she explained her condition, and her former physician, and they all said they had no scientific explanation for the cure.

We rejoice not only with this person, but with all who are still alive and with the greater Church. We give thanks for the recognition of the holiness that was given to Fr. Solanus Casey.”

The announcement that the “favor” has been investigated and officially declared miraculous means that the local church in Detroit, as well as Capuchin Franciscan Fraternities around the world, may offer prayers and Masses invoking the intercession of Fr. Solanus. The new “Blessed Solanus Casey” will be added to the Church’s official roster of blesseds and will be assigned his own feast day, although that date has not yet been announced. v