Written by Louis Even on Monday, 01 August 2011. Posted in Encyclical letters & Other documents of the Magisterium

On May 15, 2011, the Church celebrates the 50th anniversary of the encyclical Mater et Magistra of John XXIII (the encyclical in Latin speaks of the Church as “mother and educator of all peoples”), the third of the great encyclicals on the social order that the Popes have given to the modern world. The first was Rerum Novarum by Leo XIII in 1891. The second, forty years later, was Quadragesimo Anno by Pius XI.

Other social encyclicals followed: Pacem in Terris in 1963, Populorum Progressio of Paul VI in 1967 on the development of peoples, and many encyclicals of John Paul II: Laborem Exercens in 1981 on human work, Solllicitudo Rei Socialis in 1987 and Centesimus Annus in 1991; from Benedict XVI, Caritas in Veritate in 2009.

The encyclicals do not contradict each other. Each one applies the principles of the Social Doctrine of the Church to situations that are particular to the era in which they appeared.

In this way, Mater et Magistra deals more espcially with the increase in social relationships, and the relations between the different sectors of production (with a special attention on the agricultural sector) and also the demands of justice in relations between countries that are underdeveloped.

So, as various translations of the encyclical used the word “socialization,” many readers were wrongly led to believe that the Pope was in favor of socialism.

And he explains that socialium rationum incrementa, means “the multiplication of relations in common life.” There is no shadow of socialism here. 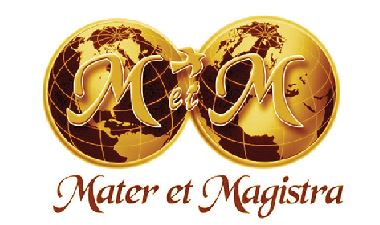 The needs of the person

Man is a social being by nature and by necessity. By nature, as the whole person, human as well as angel, created in the image of the Creator God, Himself the perfect society of three Persons. By necessity; man cannot be isolated and be sufficient by himself.

It has always been that man has formed groups and associations to obtain better together, for each of them, what each separately can only obtain with difficulty or even not at all.

According to the terms of Mater et Magistra: “This development in the social life of man… is also partly the result, partly the expression of a natural, well-nigh irresistible urge in man to combine with his fellows for the attainment of aims and objectives which are beyond the means or the capabilities of single individuals. ” (n. 60)

The advantage of the association

If men search also to associate themselves for many different ends, it is evidently because they expect certain social and economic advantages. They permit people to attain more goods by collaboration then by separate efforts. They permit as well to expand and embellish life, that is to say, the sphere in which the person moves.

Mater et Magistra says, “Clearly, this sort of development in social relationships brings many advantages in its train. It makes it possible for the individual to exercise many of his personal rights, especially those which we call economic and social and which pertain to the necessities of life, health care, education on a more extensive and improved basis, a more thorough professional training, housing, work, and suitable leisure and recreation.” (n. 61)

Even so, increasing social relationships is not without danger. Like all human endeavors if we do not take care to watch over, examine, weigh, think, choose and orientate them. From being primarily a factor of enrichment, the increase in social relationships may end up, with the organization, regulation and legalization that accompanies it, suffocating the human person.

If man was created to be sociable, he was also created to be free. Liberty and responsibility that implicates a wise usage of freedom empowers the dignity of the human person. This dignity should not be tarnished by “socialization,” or the increase in social relationships. The person should be served by the group, not be immersed or atrophied into the group. The person should stay master of himself and his decisions.

What about Social Credit?

What about Social Credit? How does it figure in what Mater et Magistra says of “socialization,” in the sense of the multiplication of the social relations of the person?

The end, the objective of the propositions of Social Credit, is the establishment of a socio-economic order in which the person could blossom and attain his ultimate destiny. In order to serve the end, being born into life in society, the power to realize through association what the individual cannot or only imperfectly attain alone.

There can only be Social Credit though association. It is the strength of association that constitutes a real credit, a social credit, because its origin is in the life of society. In regards to the association of persons, if the life in society does not bring a supplementary improvement for the people who are associated with it, it is not social credit.

When there are two or more people who associate together, they mutually help each other to better obtain a commonly desired result, there is in this association an added strength that would not be there if each person had acted separately. The strength of this association is a social credit, in the measure of the association.

We see here what Mater et Magistra calls the socialum rationum incrementa, the increase in social relationships, which is effective in view of the advantages that it should normally procure. The founder of the Social Credit school, economist-engineer Clifford Hugh Douglas calls this advantage the increment of association.

The deduction is that this improvement is not earned by one or the other of the associates but is born from the simple fact of association and it should be shared between all the associates. They could receive an unequal recompense in return of that which supplied the irregular individual efforts or competence; but thanks to the association, the effort or competence multiples and belongs to each person equally.

This is in regards with each well-constituted association. It should be this way also with the great association that we call “the society.” Life in society certainly permits a total production of goods and services that is quite considerable.

It is on this fact that the social credit doctrine is based, the right of each citizen to have a social dividend, a part in the improvement of life in society.

In Mater et Magistra, the Pope underlined successively the advantages and dangers of “socialization.” “Socialization” stops being a good when the sacrifices that are given the person are not compensated by the advantages that can be attained by the said association.

There is then frustration instead of improvement. It is what we ask for our society today; especially when we see how the national economy is making a small handful of people become rich at the expense of the great number of unsatisfied people.

This danger threatens the entire organized group. The group can not dominate the people. It is the group that exists for each person and not the person for the group.

In their Message for the Celebration of Labour Day 1962 on “socialization,” the Bishops of Canada wrote: “The organization is made to serve man, and not man to serve the organization.”

Douglas expressed this same principle multiple times. In the first chapter of his first work Economic Democracy, he wrote: “Systems were made for men, and not men for systems, and the interest of man which is self-development, is above all systems.”

It was 44 years before the encyclical Mater et Magistra written by John XXIII that Douglas conceived and presented the concrete propositions (in 1917) for which, at the level of the nation, the person should be enriched by association instead of being suffocated by it.

Mater et Magistra wishes the quick development of economic structures to contribute, not to concentrate the riches and the property in the hands of a few, (even less in the hands of a totalitarian State) but to diffuse as much as possible the idea of private property: “Durable consumer goods,” wrote the Pope, “houses, land, tools and equipment (in the case of craftsmen and owners of family farms), and shares in medium and large business concerns.” (n. 115)

Since the year 1917, Douglas offered a genial formula that would give to each person the recognition due to him; a part of a real national credit. Each citizen would receive at his birth a social share, inalienable, non-transferable and capable of providing at least the essential necessities of life. And as the flow of production results in a larger part from progress and less from the effort from the producer, the distribution of purchasing power is being done more through dividends and less through salaries.

A capitalism thus corrected, causing revenue linked to the person to grow, that is not connected to his work, will leave no one in poverty or in the humiliation of being helped by the State or at the expense of others. Production will be motivated by the efficient demand of consumers provided with purchasing power. With the rapid disappearance of the waste of natural resources, time and human activities — waste that is due to crazy regulations that forces employment in indifferent production in order to have a right to an income, a production that can often be useless or harmful.

You have to have really badly understood the encyclical Mater et Magistra written by John XXIII to see even a small approbation of socialism. It is more likely the Social Credit school that will be comfortable, even very comfortable, reading what John XXIII wrote about “socialization,” about private property, the function of the State, the rights of the person and the conditions needed to establish and protect the liberty and dignity of man.

(Vatican Information Service) — On May 16, 2011, Benedict XVI received the participants in the World Conference promoted by the Pontifical Council "Justice and Peace" on the 50th anniversary of Blessed John XXIII's Encyclical Mater et Magistra.

In his discourse, the Pope stressed that "truth, love, justice, indicated by Mater et Magistra, along with the principal of the universal destination of goods, as fundamental criteria for overcoming social and cultural imbalances, remain the pillars for interpreting and resolving the imbalances caused by today's globalisation. In the face of such imbalances there is a need to re-establish a'whole reason'able to give rise to a rebirth of thought and ethics.... It is necessary to develop'humanistic cultural syntheses'open to transcendence through a'new evangelisation.'"

"The various examples of imbalance worldwide, characteristic of this age, feed other ills such as disparity, differences in wealth, inequality, which create problems in terms of justice and the equitable distribution of resources and opportunities, especially in relation to the world's poorest."

The Pope remarked that "no less worrying are the phenomena linked to the financial system which, after the most acute phase of the recent crisis, has returned to the frenzied issue of credit contracts which frequently give rise to limitless speculation... similarly, the increase in price of primary energy resources... have negative consequences on the environment as well as on humans."

"The current social question," he added, "is without doubt that of world social justice... the equitable distribution of material and non-material resources, and the globalisation of substantial, social and participatory democracy." This justice, he continued, "cannot be achieved solely on the basis of mere social consensus, without recognising that this, in order to be long-lasting, must be rooted in universal human good."

Referring to the diffusion of the Social Doctrine of the Church, the Pope concluded by recalling that "there exist important institutions at the service of the new evangelisation, such as voluntary associations, Christian or Christian-inspired non-governmental organisations, the Commission Justice and Peace, the offices for social and work problems and the Centres and Institutes for Social Doctrine."