Let us give testimony to the truth

"The time will come when people will not endure sound doctrine" 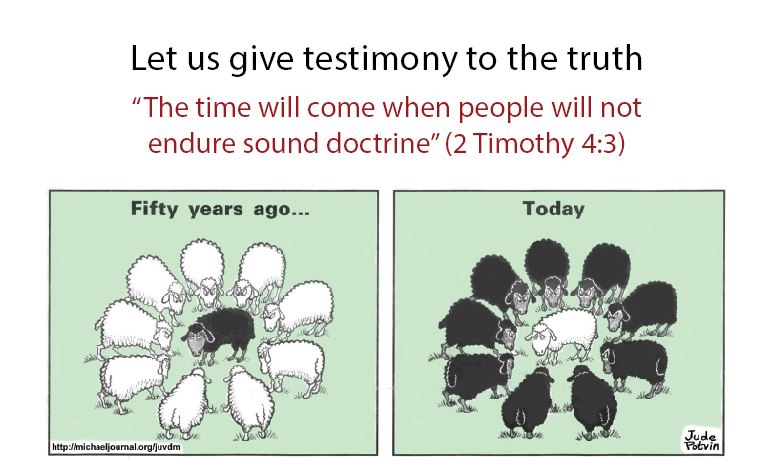 The reasoning today is this: what is done by the majority is considered to be “all right”. For example, if the majority of the people do not go to church on Sunday, then those who still do go will be called the “oddballs”, the “Jesus freaks”, eccentric people who have a problem, etc… For centuries, abortion was always considered murder, but now we no longer imprison those who murder the infant in the mother’s womb, but rather, we imprison those who denounce these murders!

We have completely lost the sense of true values today; what was once considered evil in God’s eyes is now seen as acceptable. Similarly, if one denounces homosexuality, or preaches chastity before marriage, they are considered “intolerant”, or even bigots. Yet, the Commandments of God are quite clear and will never change. St. Paul declares that “…neither fornicators, nor idolaters, nor adulterers, nor effeminate, nor homosexuals, nor thieves, nor the covetous, nor drunkards, nor revilers, nor swindlers will inherit the kingdom of God” (1 Cor. 6:9). And the list of examples could go on.

So, what is the problem? It is the battle between God and Satan, between good and evil that continues since the beginning of the world to be fought upon the earth. Because so many no longer arm themselves with the means to remain in God’s grace, they fall into the traps set by the devil and listen to his lies. St. Paul also wrote: “For the time will come when people will not endure sound doctrine, but having itching ears they will accumulate for themselves teachers to suit their own likings, and will turn away from listening to the truth and wander into myths” (2 Tim. 4:3-4).

People call “virtues” what are actually vices. People do not want to believe the truths of the Catholic faith, to believe in the real presence of God in the Holy Eucharist, but they make false idols and are willing to believe the lies of Satan like astrology, reincarnation, aliens, etc.. To see these lies so prevalent, one can not help but make the connection with these terrible words of Our Lord: “But when the Son of man comes, will he find any faith on earth?” (Luke 18:8.)

As Pope John Paul II wrote in his Encyclical Letter Evangelium Vitae (The Gospel of Life): “A large part of contemporary society looks sadly like that humanity which Paul describes in his Letter to the Romans. It is composed ‘of men who by their wickedness suppress the truth’ (1:18): having denied God and believing that they can build the earthly city without Him, ‘they became futile in their thinking’ so that ‘their senseless minds were darkened’ (1:21); ‘claiming to be wise, they became fools’ (1:22).”

These people do not want the Commandments; they want the freedom to be able to commit all the sins that they desire. How foolish they are! God has put into the heart of man a desire for the infinite that only He, God, and no other creature can fulfill. Therefore, the man who lives in sin may seek happiness, but he will never find it. St. Augustine who, early on, led a very immoral life, after his conversion wrote in his Confessions: “You have created us for You, Lord, and our heart is happy only when it rests in You.”

People claim to free themselves from God and His Commandments, but they become slaves to their sins. For them, the mere presence of practicing Christians is a reproach. Christians and Catholics are a threat to today’s way of life, and as a result, they are persecuted for not going along, so to speak, with the trend of the world. But Jesus said: “The servant is not greater than the master. If they have persecuted Me, they will also persecute you” (John 15:20).

Things can and will change

Faced with these situations where injustice and evil seem to prosper, many are tempted to become discouraged and to doubt. If you happen to talk to them about the need to correct the financial system, they will tell you: “We know you are right, but there is nothing you can do; people are too corrupt, the Bankers are too powerful, etc.” But we, as Christians, know that there is no place for discouragement because we are certain that the final victory belongs to God; that good will triumph over evil. With God’s help, along with our human efforts, everything is possible. In his Wednesday weekly audience of January 31, 2001, Pope John Paul II explained that we must never lose hope:

“The Second Letter of Peter mentioned above had already considered this, reflecting the objections of those who are suspicious or skeptical or even ‘scoffers’, and who ask themselves: ‘Where is the promise of His coming? For ever since the fathers fell asleep, all things have continued as they were from the beginning of creation’ (2 Pt 3: 3-4).

“There is the disheartened attitude of those who renounce every effort regarding history and its transformation. They are convinced that nothing can change, that every effort is bound to be useless, that God is absent and in no way interested in this minuscule point in the universe which is the earth... If, in fact, nothing can change, what is the sense of hoping? One can only sit on the sidelines of life, letting the repetitive movement of human events complete its perennial cycle.

“With this attitude, many men and women have already fallen on the fringes of history, without confidence, indifferent to everything, unable to struggle or hope. But the Christian vision is clearly explained by Jesus when, asked by the Pharisees when the kingdom of God was coming, He answered them: “The kingdom of God is not coming with signs to be observed; nor will they say, ‘Lo, here it is!’ or ‘There!’ for behold, the kingdom of God is in the midst of you!” (Lk 17: 20-21).

“The temptation of those who imagine apocalyptic scenes of the in-breaking of God’s kingdom and who close their eyes, weighed down with the sleep of indifference, is opposed by Christ in the quiet coming of the new heavens and the new earth. This coming is similar to the hidden but vigorous growth of the seed sprouting from the ground (cf. Mk 4:26-29).

“God therefore entered the world and human history and proceeds silently, waiting patiently for humanity with its delays and conditioning. He respects its freedom, supports it when it is gripped by desperation, leads it step by step and invites it to collaborate on the project of truth, justice and peace of the kingdom. Divine action and human effort must therefore be intertwined. ‘There is no question, then, of the Christian message inhibiting men from building up the world or making them disinterested in the good of their fellows: on the contrary, it is an incentive to do these very things’ (Gaudium et spes, n. 34).

“The mission of the Church, consequently, is not only to bring men the message and grace of Christ, but also to permeate and improve the whole range of the temporal order with the evangelical spirit’ (Apostolicam actuositatem, n. 5). The spiritual and temporal orders ‘are distinct; they are nevertheless so closely linked that God’s plan is, in Christ, to take the whole world up again and make of it a new creation, in an initial way here on earth, in full realization at the end of time’ (ibid).

“Heartened by this certainty, Christians walk courageously on the world’s highways, seeking to follow in God’s footsteps and to cooperate with Him in giving birth to a horizon in which ‘steadfast love and faithfulness will meet; righteousness and peace will kiss each other’ (Ps 85 [84]:11).”

Give testimony to the truth

You are afraid of persecution? Think about it in this way: Whatever you say, you will never be able to please everyone. Therefore, since you can never please everyone, make sure to at least please God; that’s the only thing that matters. God does not even ask us to succeed in everything that we do, but He wants for us to at least try; to try to be witnesses. What is impossible for you to do, God will do it, provided you do your small part, cooperating in His work of salvation. One example of being a witness for anyone who knows about the work of MICHAEL: you can make it a duty to give testimony with this magazine by making it known to others and by finding new subscribers.

In each situation, do not ask yourself what others are thinking about you, but rather, what God is thinking about you. We must never be ashamed of God or of our faith. “For whoever is ashamed of Me and My words in this adulterous and sinful generation, the Son of Man will also be ashamed of him when He comes in the glory of His Father with the holy angels” (Mark 8:38). Jesus tells us: “Fear not…I am with you always, until the end of the age.” (Mt 28:20.)

The state of grace

Our goal towards God should be “to know Him, to love Him, and to serve Him in this world, and to be happy with Him forever in the next” (Baltimore Catechism, Ques. 6). If we miss out on this, then we have lost everything. To live on earth ignoring this objective would be pure madness. We are but pilgrims upon the earth; we are only passing through. Our true home is in Heaven, but be careful; we do not go there automatically. As it is written at the end of the Gospel of Matthew on the Last Judgement, we will only go there if we have put into practice the love of God and of our neighbor. Otherwise, it will be the eternal fire of Hell, being deprived of God for all eternity.

Without the help of God, we cannot remain in the state of grace. We totally need His help, His Sacraments. To remain in the state of grace, the Pope suggests to the youth these five means: frequent Communion and Confession, prayer, meditating on Holy Scripture, and Eucharistic Adoration. God’s greatest desire is to live in union with us in our hearts. This is why He created for us the sacrament of the Holy Eucharist, which is the most intimate means of uniting Himself with us: to give Himself as Food. What a great mystery of Love!

But, in order to receive the Body of Christ, we must not have serious (mortal) sin on our conscience. The first condition for salvation is to recognize that we are sinners and that we need the forgiveness of God in the confessional. He who says that there is no sin cannot be saved because he does not need God’s forgiveness. To be forgiven, serious (mortal) sins must be confessed individually to a priest in the confessional. (See pages 16 to 18.)