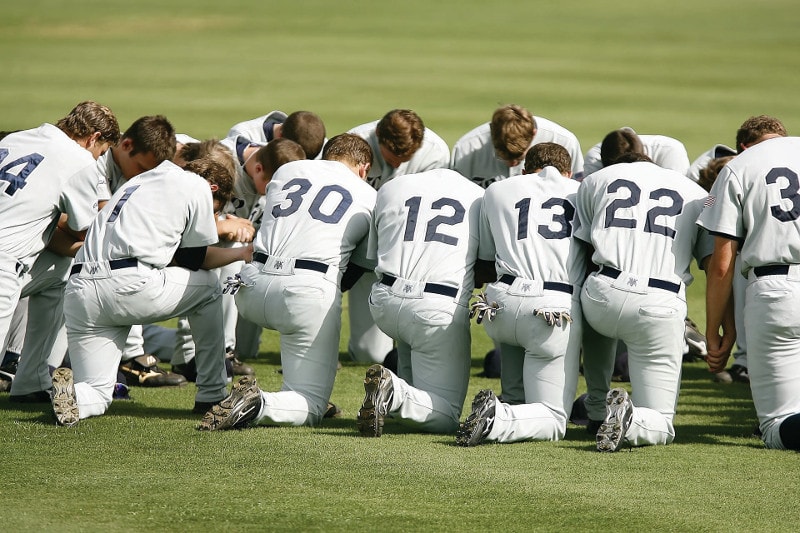 Knees symbolize both strength and humility. Athletes use strong knees to run for touchdowns in football and to block shots and to slam-dunk in basketball. Knees also bend in adoration of the Eucharistic King and in recognition of the grandeur and majesty of the Most High God.

Already in Biblical times, knees were a symbol of humility and strength. To bend one’s knee before God was a profound act of worship; it stated boldly yet simply that God is the source of all power and that the one on bended knee is ready to place his life and all his energy at the service of the Lord.

What we do with our knees gives evidence of what we believe in our hearts. When we kneel down beside the bed of a dying person, when we stand up for the dignity of the unborn child, when we genuflect before Christ in the Blessed Sacrament, we say louder than any rhetoric what matters most in our lives. Knees express what we believe and make clear what we will live and die for.

When we gather at the Eucharist, our attention is drawn with awe and devotion to the sacramental presence of Christ. While the Body of Christ far exceeds the value of our own bodies, it also gives meaning to them. It reminds us, too, of the human body’s vital role in that “full, conscious and active participation in the Sacred Liturgy” called for by the Church at the Second Vatican Council.

It is understandable then why our posture at Holy Mass stirs such deep emotion within us who cherish our Catholic faith, and who know that our greatest treasure is the Eucharist. In three liturgical postures at Mass, our knees play a central role: kneeling, standing, and genuflecting. Let us look, for a moment, at the practice of kneeling.

Kneeling for the Eucharistic Prayer

The General Instruction for the Roman Missal (Third Edition) speaks of the proper posture for the laity during the Eucharistic Prayer. In paragraph 42, it states: “In the dioceses of the United States of America, they should kneel beginning after the singing or recitation of the Sanctus until after the Amen of the Eucharistic Prayer, except when prevented on occasion by reasons of health, lack of space, the large number of people, or some other good reason. Those who do not kneel ought to make a profound bow when the priest genuflects after the Consecration. The faithful kneel after the Agnus Dei unless the Diocesan Bishop determines otherwise.”

It is expected, then, that the lay faithful kneel during the Eucharistic Prayer and after the Agnus Dei, unless they are prevented “on occasion” from doing so. It is only in exceptional situations and on extraordinary occasions that the laity stand during the Eucharistic Prayer. Or course, it is understood that some of the elderly and disabled will not be able to kneel. In chapels in nursing homes and similar environments, kneeling is often not possible. Special problems are also posed by those few churches and chapels that presently have no kneelers. In these cases, until the installation of kneelers can occur (which I hope will be soon), kneeling may not be possible.

The practice of kneeling assists our whole person to be attentive to the Lord, to surrender to His will, to lift our soul and our voices in worship. Indeed, it points to the heart of what faith in Christ is all about. We see this reflected already in the earliest days of the Church. In the Acts of the Apostles we are told that St. Peter “knelt down and prayed” (9:40), and that St. Paul “knelt down and prayed with them all” (20:36); we see how the first Christian martyr St. Stephen fell to his knees and prayed that his enemies be forgiven (cf. 7:60), and we see how the whole community, men and women and children, prayed on their knees (cf. 21:5).

Even Jesus knelt to pray

Jesus Himself knelt to pray to His beloved Father. We see this most dramatically in the Garden of Gethsemane where, on His knees, He speaks those deeply moving words: “Father, if you are willing, take this cup away from me; still, not my will but yours be done” (Luke 22:42).

The passage of Sacred Scripture that gives the strongest theological foundation for kneeling is that famous hymn found in St. Paul’s Letter to the Philippians, 2:6-11, where we are told that “at the name of Jesus every knee should bend, of those in heaven and on earth and under the earth, and every tongue confess that Jesus Christ is Lord, to the glory of God the Father.”

Kneeling is more than a gesture of the overly pious. It is a fundamental act of faith, a strong expression about Who stands at the center of one’s life and Who stands at the center of all creation. Bending the knee at the name of Jesus is a decisive act of those with athletic souls and humble hearts. There is nothing passive about kneeling in humility and adoration. When the knees act in response to a heart that loves Christ, there is unleashed a force so strong it can change the face of the earth. Grace is the name we give to this force.

The devil has no knees

According to Abba Apollo, a desert father who lived about 1,700 years ago, the devil has no knees; he cannot kneel; he cannot adore; he cannot pray; he can only look down his nose in contempt. Being unwilling to bend the knee at the name of Jesus is the essence of evil (Cf. Is 45:23, Rom 14:11). But when we kneel at Jesus’ name, when we bow down in service of others, and when we bend the knee in adoration, we are following in the footsteps of the Magi; we are imitating Blessed Mother Teresa of Calcutta, St. Maximillian Kolbe, and all the saints and angels in heaven. “Come, let us bow down and worship. Let us kneel before the Lord who made us.” (...)