Pope John Paul II knew very well the Capuchine priest he officially declared a saint on June 16. Here are excerpts from an article written in the March-April, 2002 issue of the Italian magazine “Medjugorje,” published by Turin's prayer group “Regina Pacis”:

Karol Wojtyla met Padre Pio for the first time in 1947. It was not an ordinary meeting, like with other pilgrims. It is a meeting that lasted almost a week, during which young Father Wojytla had the opportunity to talk for a long time with Padre Pio, to assess his doctrine and have a precise conception of his spirituality.

Karol Wojtyla therefore resigned himself to be a secular priest, giving up for ever the plan of becoming a monk. Invited in Rome to specialize in theology, he learned that, on Mount Gargano, lived a monk who had the stigmata. When the school year ended, Karol left for Mount Gargano. He was able to have a few meetings with Padre Pio, and naturally, went to confession to him.

What did Padre Pio say to Father Wojtyla? We don't know. The Pope did not speak about it. But on the day of his election as a Pope, on October 16, 1978, curious things circulated in Rome about this meeting in 1947. People said that Padre Pio had foretold to young Wojtyla that he would become a Pope. An old Polish priest said to me that Karol Wojtyla, still young, often alluded to this prophecy, and joking, judged its realization impossible. But after he became Bishop, than Archbishop of Krakow, he no longer spoke about it, because he was starting to think that the prophecy might well come true.

In May, 1981, the assassination attempt against John Paul II took place on St. Peter's Square. Padre Pio's prophecy about Karol Wojtyla came back up for discussion. It was said that in 1947, Padre Pio had also foretold to the young Wojtyla the assassination attempt: “You will see your white cassock stained with blood.” Before this is confirmed, one can only consider this as a pious legend. However, the Pope never denied the fact that he did meet Padre Pio in 1947, and held him in high esteem ever since.

An indisputable proof of this high esteem for Padre Pio is an event that took place in 1962. Young Bishop Wojtyla was then in Rome, attending Vatican II. He received from Krakow a letter which informed him that one of his main collaborators, Dr. Wanda Poltawska, a doctor in psychiatry with whom he had worked a lot in family services, was seriously ill with throat cancer. The doctors had decided to operate on her, but the hope of saving her was almost nil.

Wojtyla learned of the news with great sorrow, not only because she was a personal friend of his, but also because she was still young with four children, who would have become orphans. Medicine could do nothing. Wojtyla thought about Padre Pio. He wrote to Padre Pio a letter in Latin, which was handed to the Capuchine priest by Msgr. Angelo Battisti, who was working at the Secretary of State of the Vatican, and also the administrator of the House for the Relief of Suffering, the hospital founded by Padre Pio.

Msgr. Battista handed the letter to Padre Pio, who replied, after having read it: “Angelo, I cannot say no to this request.”

Eleven days later, Msgr. Battisti returned to San Giovanni Rotondo, with a second letter of Archbishop Wojtyla, in which he thanked Padre Pio, saying: “The lady who was ill with cancer was suddenly healed before entering the operating room.”

The dialogue begun in 1947 between Padre Pio and Karol Wojtyla continued. The admiration and esteem of Karol Wojtyla for Padre Pio increased after the death of the monk. Archbishop Wojtyla was the first one to send a letter in Rome to ask for the opening of the beatification process. On May 25, 1987, Pope John Paul II made a pastoral visit to San Giovanni Rotondo, to kneel and pray at Padre Pio's tomb. And it is he, Karol Wojtyla, now Pope John Paul II, who now officially declares Padre Pio a saint. 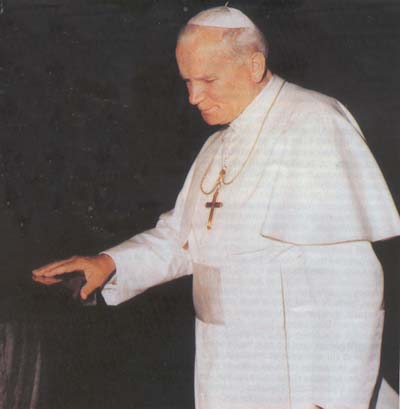