on Saturday, 01 May 2010. Posted in Roman Catholic Church

The patient on the white hospital bed was obviously very ill. A large metal device was fitted to her head and neck with screws, and she had been given medication that turned her mouth purple. Alexia Gonzalez Barros contracted and died of a cancerous tumor in her spine at the age of 14.

She offered her suffering for others and faithfully lived her motto and constant prayer, "Jesus, may I always do what you want." She told her mother, "Mommy, please be calm. I am not afraid anymore. I'm happy."

She was a very artistic child and loved the fashionable clothes that her mother would make for her. As did all the members of her family, she was also an avid reader. Alexia once began a school paper with these words, "To serve is to live joyfully." Alexia's cause for beatification has been entered in Rome.

On New Year's eve in 1980, Fathi Baladi was on his way to Araya to visit a fellow student. He did not return. His parents found him riddled with bullets, lying on the seat of his car, his arms folded in the form of a cross, his face serene, suggesting peace of soul and resignation to his tragic fate.

He said, "If you sometimes feel cold at night, look around you and see those who are shivering even more than you, and you will feel warmed. If you suffer hunger or thirst one day, look around you at those who are dying of hunger and thirst, and you will be calmed. Do not look for life in distant wonders; it is close to you and awaits you with arms outstretched, smiling, bearing the sheaf of wheat and heather of a flower."

As the last vestiges of life slipped from the body of the 17 year old tuberculosis patient, Annie Zelikova, told her visitor, "I must smile to my last breath. All I can give God now are my heartbeats and my smile. Nothing is left to me except love and trust."

"In the midst of the world we can live like in Heaven. Everything around us always mirrors God. And the less the world thinks of Him, so much greater is our duty to let our thoughts be attentive only to Him. To let resound the words: I am God's, I belong to Heaven. How our neighborhood is, depends on us – always. We have to change it, at least where we are; we have to produce Heaven.

While playing tennis one day, Chiara Luce Badano experienced a very sharp pain in her shoulder. At first she didn't take any notice. But because the pain simply didn't go away, she went to see her doctor. The verdict: osteogenic sarcoma – one of the most serious and painful forms of cancer.

Referring to a intravenous drip attached to her arm, she said, "These drops are nothing compared to the nails driven into the hands of Jesus." And with each falling drop, she would say, "For You, Jesus." When Cardinal Saldarini visited her in the hospital, he asked her, "The light in your eyes is splendid. Where does it come from?" She replied, "I try to love Jesus as much as I can." On Sunday, October 7th at 4:00 am, she met her "Spouse." Her father and mother were at her bedside, and all her friends were in the adjoining room. There was a great sense of peace. Her last words to her mother were, "Goodbye. Be happy because I'm happy." Chiara will be beatified on Sept 25, 2010.

After reading a book about St. Therese of Lisieux, Charlene Richards took it home to read to her grandmother. Then her grandmother asked her if she, too, could become a saint.  "Yes, if you pray in the right way," replied Charlene. Charlene became ill at 12 years old with acute lymphatic leukemia. She died just thirteen days after the diagnosis and suffered terribly. Throughout her brief illness, she always remained cheerful and never complained. 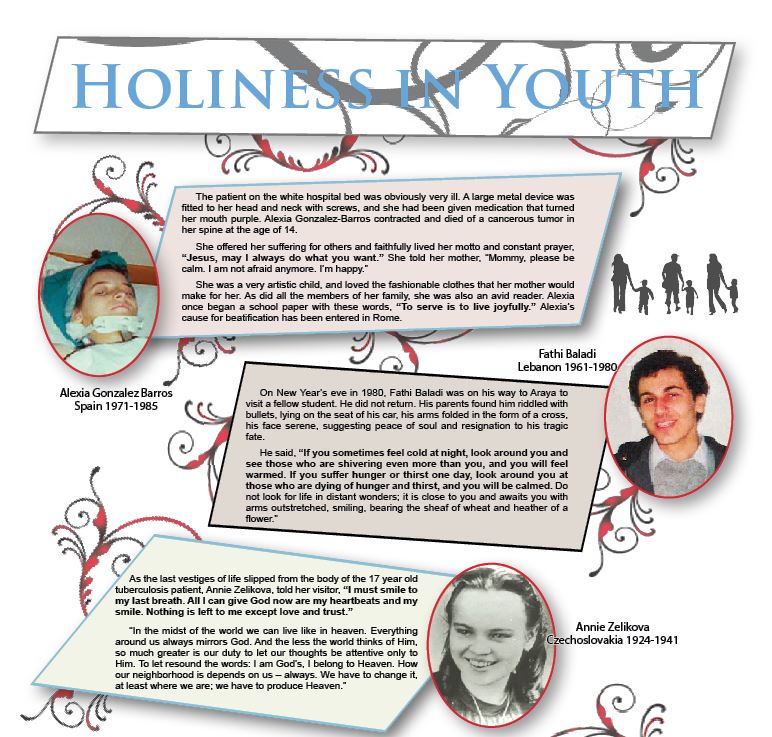 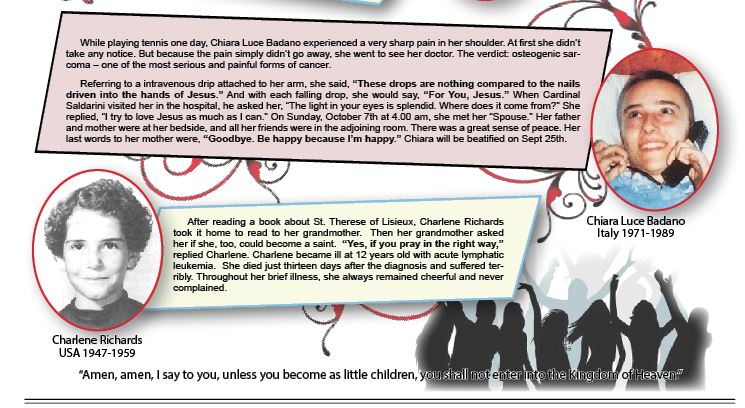