April 27, 2014 — Divine Mercy Sunday — was an unforgettable day in the history of the Church: two Popes were canonized in the presence of two living Popes.

On that day, Pope Francis has included Popes John XXIII (born Angelo Roncalli, Pope from 1958 to 1963) and John Paul II (born Karol Wojtyla, Pope from 1978 to 2005) in the catalog of saints during a solemn Mass on St. Peter’s Square, in the presence of Pope Emeritus Benedict XVI and some 500,000 people, according to the Vatican.

The crowd, which extended as far as the banks of the Tiber River, had filled St. Peter’s Square right before dawn, after the “white night” of prayer in the churches of Rome’s historic center. Many had come from Poland and Bergamo, the birth places of John Paul II and John XXIII, while flags from around the world were waving under an overcast sky and a light breeze. Giant screens were installed all along the streets and squares which gathered 300,000 others.

A time of prayer began at 9 a.m., an hour before the celebration, based on texts of the future holy popes, followed by the Chaplet of Divine Mercy. Benedict XVI arrived around 9:30 a.m., applauded enthusiastically by the crowd, and he sat among the concelebrating cardinals.

Led by four choirs — the choir of the Sistine Chapel, the choir of the Diocese of Rome, and those of Krakow and Bergamo — the celebration began at 10 a.m. with the Litany of Saints, while the cardinals and patriarchs came in procession before Pope Francis. After having incensed the altar, Pope Francis went to greet Benedict XVI.

The celebration continued directly with the rite of canonization, which was introduced by an exchange between Pope Francis and Cardinal Angelo Amato, Prefect of the Congregation for the Causes of Saints: three times, the cardinal asked the pope to include John XXIII and John Paul II in the catalog of saints, invoking the aid of the Holy Spirit with the hymn Veni Creator Spiritus. 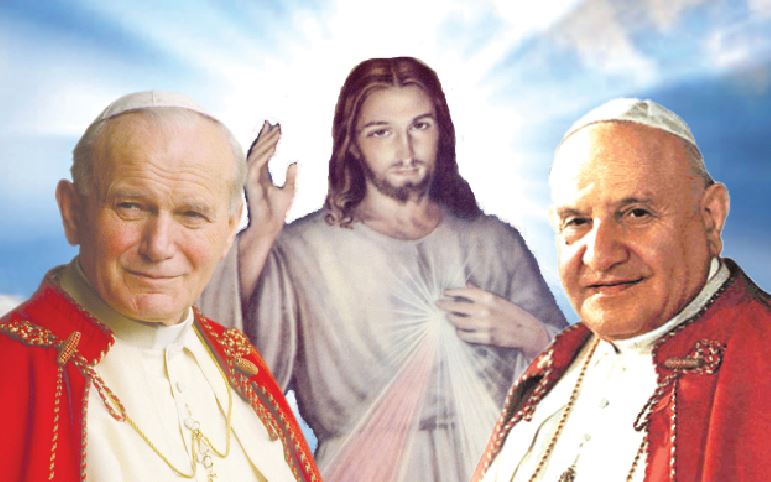 Emphasizing the solemnity of the act, and the triple authority involved with the canonization - that of Christ, the Apostles Peter and Paul and of the pope himself - Pope Francis proclaimed in Latin the official formula of canonization:

«In honor of the Holy and Undivided Trinity, for the exaltation of the Catholic faith and the increase of the Christian life, by the authority of our Lord Jesus Christ, of the Holy Apostles Peter and Paul, and our own, after due deliberation and frequent prayer for divine assistance, and having sought the counsel of many of our brother Bishops, we declare and define blessed John XXIII and John Paul II be saints, and we inscribe them in the Book of saints, decreeing that they are to be venerated as such by the whole Church. In the name of the Father, and of the Son, and of the Holy Spirit.

The assembly responded three times, «Amen!», applauding loudly the two new saints whose portraits on blue background adorned the facade of St. Peter’s Basilica. The relics of the two saints popes - skin tissue of John XXIII and some blood of John Paul II - were brought in procession to Pope Francis who venerated them, and were then placed on a pedestal beside the altar, which was ornated with multicolored roses from Ecuador.

Here is the homily delivered by Pope Francis for the canonization of John XXIII and John Paul II:

At the heart of this Sunday, which concludes the Octave of Easter and which Saint John Paul II wished to dedicate to Divine Mercy, are the glorious wounds of the risen Jesus.

He had already shown those wounds when he first appeared to the Apostles on the very evening of that day following the Sabbath, the day of the resurrection. But, as we have heard, Thomas was not there that evening, and when the others told him that they had seen the Lord, he replied that unless he himself saw and touched those wounds, he would not believe. A week later, Jesus appeared once more to the disciples gathered in the Upper Room. Thomas was also present; Jesus turned to him and told him to touch his wounds. Whereupon that man, so straightforward and accustomed to testing everything personally, knelt before Jesus with the words: “My Lord and my God!” (Jn 20:28).

The wounds of Jesus are a scandal, a stumbling block for faith, yet they are also the test of faith. That is why on the body of the risen Christ the wounds never pass away: they remain, for those wounds are the enduring sign of God’s love for us. They are essential for believing in God. Not for believing that God exists, but for believing that God is love, mercy and faithfulness. Saint Peter, quoting Isaiah, writes to Christians: “by his wounds you have been healed” (1 Pet 2:24, cf. Is 53:5).

Saint John XXIII and Saint John Paul II were not afraid to look upon the wounds of Jesus, to touch his torn hands and his pierced side. They were not ashamed of the flesh of Christ, they were not scandalized by him, by his cross; they did not despise the flesh of their brother (cf. Is 58:7), because they saw Jesus in every person who suffers and struggles. These were two men of courage, filled with the parrhesia of the Holy Spirit, and they bore witness before the Church and the world to God’s goodness and mercy.

They were priests, and bishops and popes of the twentieth century. They lived through the tragic events of that century, but they were not overwhelmed by them. For them, God was more powerful; faith was more powerful – faith in Jesus Christ the Redeemer of man and the Lord of history; the mercy of God, shown by those five wounds, was more powerful; and more powerful too was the closeness of Mary our Mother.

This hope and this joy were palpable in the earliest community of believers, in Jerusalem, as we have heard in the Acts of the Apostles (cf. 2:42-47). It was a community which lived the heart of the Gospel, love and mercy, in simplicity and fraternity. 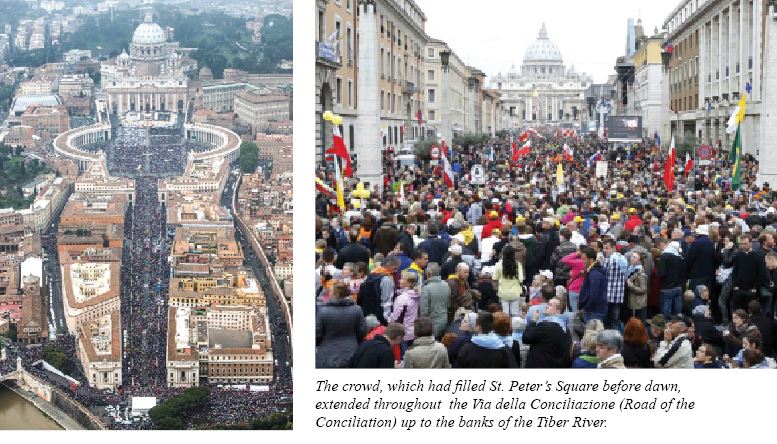 May these two new saints and shepherds of God’s people intercede for the Church, so that during this two-year journey toward the Synod she may be open to the Holy Spirit in pastoral service to the family. May both of them teach us not to be scandalized by the wounds of Christ and to enter ever more deeply into the mystery of divine mercy, which always hopes and always forgives, because it always loves.