“Go, Francis, and repair my Church!”

On March 13, 2013, the cardinals gathered in conclave in the Vatican elected the new successor of Peter and leader of 1.2 billion faithful of the Church founded by Jesus Christ, the Roman Catholic Church. This new pope was not the one the so-called pundits had predicted, but the one God had in mind from all eternity to take up the challenges of today’s Church: cardinal Jorge Mario Bergoglio, 76, Archbishop of Buenos Aires in Argentina. He is the first Jesuit priest chosen to be pope, the first pope from the Americas, and the first non-European pope since St. Gregory III, who was born in Syria and reigned from 731 to 741 And, of course, he is the first pope to be called Francis, in honor of St. Francis of Assisi.

From the very first days of his pontificate, all noticed that the new pope wanted to keep the simple lifestyle he had as an archbishop in Buenos Aires, for example, by keeping his black shoes instead of using the red ones that are traditionally worn by popes, or by lodging in the Santa Martha House with the employees and guests of the Vatican, instead of the papal apartments. Besides, he said himself, during his first meeting with journalists: “How I would like a Church which is poor and for the poor!”

It is this different style that brought journalists to say that we would witness with Pope Francis a “revolution” in the Vatican and enter a new era, some going as far as to say that Francis would be the opposite of Benedict XVI, and that the Church would be “at last more open” and one would finally get all that the so-called “progressive” had always called for: marriage of priests, ordination of women to the priesthood, a Church without dogmas, etc.

Wait a minute! Even though the style is different, the new pope is still Catholic! It is true though that Pope Francis, since the time he was archbishop in Buenos Aires, likes to be close to the people — especially the poor — but he is also in perfect harmony with Benedict XVI on faith and morals, since he had taken, in Argentina, a strong stand against abortion, euthanasia, gay marriage and Marxist liberation theology. Even if their styles are different, both popes, Francis and Benedict, share a same vision of the Church, which is to go back to the essential, that is to say, to put Christ and his message of love at the center of everything.

If the charisma of Benedict has been to teach Catholic doctrine clearly, the charisma of Francis is to show God’s goodness and tenderness. The same truths will be taught, but with a special effort to show that all the teachings of the Church are based on the love of God. As Pope Francis said at the Mass marking the official beginning of his ministry as pope, on March 19: “We must not be afraid of goodness, of tenderness!”

During the present Year of Faith, Pope Francis will show that faith is not only about believing in something but, above all, believing in someone, Jesus Christ. One can hear many people today say: «I love Jesus, but I don’t see the need for a Church, commandments, morals, etc.» (In today’s cliche: “I’m very spiritual but not into religion.”) This is because these people don’t see the link, the connection between Jesus and all these structures, all these rules.

To that, Fr. Nicolas Buttet, the founder of the Eucharistein Fraternity, gives this interesting answer: “The door of faith is, first of all, an encounter with Someone, with Jesus Christ. Christianity is not, first of all, about dogmas, morals, or liturgy, it is about a person, Jesus Christ. And because I met this person, I want to known him in truth as He is: this is what we call dogma. I want to live to please this person and use the manual for happiness that he has taught me: this is called morals. And because I met this person, I now want to really be with him and live from him; this is called liturgy and prayer.”

To know the program of the new Pope, to know his intentions, one just has to listen or read his first speeches, and all, without exception, refer to Benedict XVI and his teachings. On his very appearance on the balcony of St. Peter’s Basilica on the evening of his election, the first words of Pope Francis were for his immediate predecessor: “And first of all, I would like to offer a prayer for our Bishop Emeritus, Benedict XVI. Let us pray together for him, that the Lord may bless him and that Our Lady may keep him.”

During his audience with the College of Cardinals on March 15, Francis said: “My thoughts turn with great affection and profound gratitude to my venerable Predecessor Benedict XVI, who enriched and invigorated the Church during the years of his Pontificate by his teaching, his goodness, his leadership, his faith, his humility and his meekness. All this remains as a spiritual patrimony for us all. The Petrine ministry, lived with total dedication, found in him a wise and humble exponent, his gaze always firmly on Christ, the risen Christ, present and alive in the Eucharist. We will always accompany him with fervent prayers, with constant remembrance, with undying and affectionate gratitude. We feel that Benedict XVI has kindled a flame deep within our hearts: a flame that will continue to burn because it will be fed by his prayers, which continue to sustain the Church on her spiritual and missionary path.”

On March 22, speaking to the diplomatic corps accredited to the Holy See, Pope Francis repeated a theme dear to Benedict XVI, pointing that there is not only material poverty, but also “another form of poverty! It is the spiritual poverty of our time, which afflicts the so-called richer countries particularly seriously. It is what my much-loved predecessor, the dear and venerated Benedict XVI, called the ‘tyranny of relativism’.”

For the general audience of Wednesday, April 3, Pope Francis took up the Catecheses of the Year of Faith, explaining this article of the Apostles’ Creed: «and rose again on the third day in accordance with the Scriptures.” For this explanation, Francis used almost word for word the explanation given on this topic by Pope Benedict XVI in his book Jesus of Nazareth Part II — Holy Week: From the Entrance into Jerusalem to the Resurrection.

One can do nothing but rejoice over the fact that Francis does not want to do without the huge theological expertise of his predecessor, this unique opportunity in the history of papacy to take advantage of the precious advice from the Pope who reigned before him. According to Fr. Federico Lombardi, the spokesperson for the Vatican, Pope Francis has spoken several times on the phone with Benedict XVI since March 13. And all were able to see the love and respect that the new Pope has for the Emeritus Pope during their historic meeting on March 23 in Castel Gandolfo. And they spoke again to each other on the phone afterwards.

Let us not worry, Jesus will never abandon his Church, nor let it sink. (See page 11.) Once again, God has given us the pastor that we need for the present times.

There is nothing to worry about the fact that the style of Francis is different from that of Benedict XVI; in fact, this is a blessing for the Church: each individual has his own charisma, which reflects one of the many attributes of God. In the case of Pope Francis, this charisma is goodness. But from a doctrinal point of view, as we have seen, far from being at variance with Benedict XVI, Pope Francis is in total harmony with his predecessor. Just like Benedict XVI, the first objective of Francis will be to proclaim Christ and the truth, as he said in the homily of his first Mass as a Pope, on March 14, in the Sixtine Chapel:

“When we do not profess Jesus Christ, the saying of Léon Bloy comes to mind: «Anyone who does not pray to the Lord prays to the devil.» When we do not profess Jesus Christ, we profess the worldliness of the devil, a demonic worldliness... Let us have the courage to walk in the presence of the Lord, with the Lord’s Cross; to build the Church on the Lord’s blood which was poured out on the Cross; and to profess the one glory: Christ crucified. And in this way, the Church will go forward.”

After the Benedictine reform (of Pope Benedict XVI, based on doctrine), there will be the Franciscan reform (of Pope Francis, based on goodness). In 1205, at the age of 23, St. Francis of Assisi was praying in front of the crucifix of the small church of St. Damian. Three times Christ on the Cross came to life, and told him: “Go, Francis, and repair my Church in ruins”. Like his patron saint, Pope Francis will continue the work of purification began by Benedict XVI, to make the Church more in keeping with the plans of Her Divine Spouse.

Finally, as he had requested himself on the day of his election, let us not forget to pray for our new Pope Francis, so that the Lord may bless him and give him the required strength and graces to fulfill his mission. And let us also continue to pray for Benedict XVI. Let us support the Holy Father, and let us go forward to profess Christ! 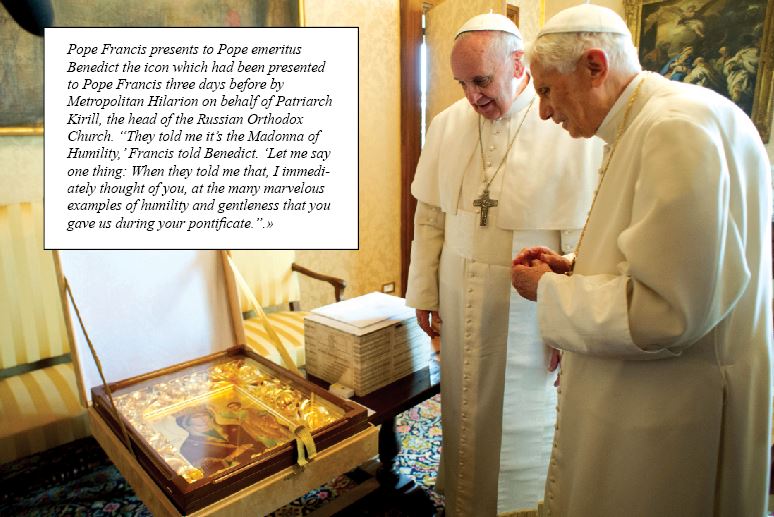