“Fatima’s mission is not complete” 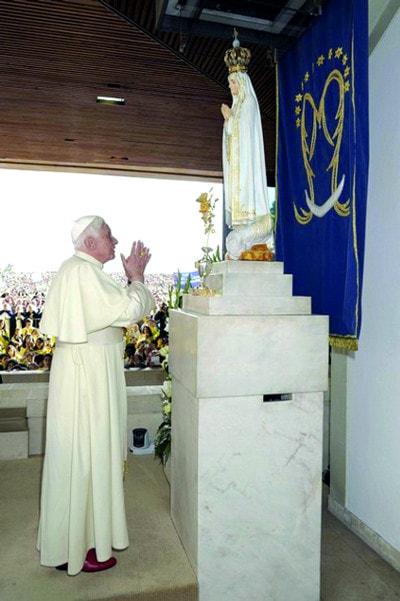 Here is what Pope Benedict XVI said at the end of his homily given on May 13, 2010, at the shrine of Fatima:

“We would be mistaken to think that Fatima’s prophetic mission is complete. Here there takes on new life the plan of God which asks humanity from the beginning: ‘Where is your brother Abel [...] Your brother’s blood is crying out to me from the ground!’ (Gen 4:9). Mankind has succeeded in unleashing a cycle of death and terror, but failed in bringing it to an end... In sacred Scripture we often find that God seeks righteous men and women in order to save the city of man, and He does the same here, in Fatima, when Our Lady asks: ‘Do you want to offer yourselves to God, to endure all the sufferings which He will send you, in an act of reparation for the sins by which He is offended and of supplication for the conversion of sinners?’

“At a time when the human family was ready to sacrifice all that was most sacred on the altar of the petty and selfish interests of nations, races, ideologies, groups and individuals, our Blessed Mother came from Heaven, offering to implant in the hearts of all those who trust in Her the Love of God burning in Her own heart. At that time it was only to three children, yet the example of their lives spread and multiplied, especially as a result of the travels of the Pilgrim Virgin in countless groups throughout the world dedicated to the cause of fraternal solidarity.

“May the seven years which separate us from the centenary of the Apparitions hasten the fulfilment of the prophecy of the triumph of the Immaculate Heart of Mary, to the glory of the Most Holy Trinity.”