Elephants attack Orissa after one year of persecution 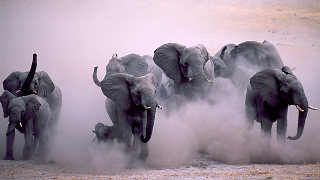 In July 2008, a severe persecution of Christians broke out in the Indian state of Orissa. A 22 year old nun was burnt to death when angry mobs burnt down an orphanage in Khuntpali village in Barhgarh district, another nun was gang-raped in Kandhamal, mobs attacked churches, torched vehicles and houses of Christians destroyed. Fr. Thomas Chellen, director of the pastoral center that was destroyed with a bomb, had a narrow escape after a Hindu mob nearly set him on fire. The end result saw more than 500 Christians murdered, and thousands of others injured and homeless after their houses were reduced to ashes. Recently a strange and dramatic event took place in Orissa, which has many people talking and wondering.

In recent months, herds of wild elephants have begun to storm villages that are home to some of the worst persecutors of Christians during the troubles. In one village, where in July a year ago the Christians had to run for their lives while their homes were being destroyed by rioters, a herd of elephants emerged from the surrounding jungle exactly one year later, in July 2009, at the same time of the day of the attack.

These elephants first attacked a rock crusher machine owned by a key leader of the persecution movement. They then went on to destroy his house and farms.

Hundreds of villagers have been forced to take shelter in camps in the Indian state of Orissa after repeated attacks by the herd of elephants.

Seven people have been killed and several others injured in attacks by a herd of 12-13 elephants over the past few weeks in Kandhamal district.

Over 2,500 people living in 45 villages have been affected by the attacks, district chief Krishen Kumar said.

It is, however, unclear why this herd of elephants migrated from the Lakheri sanctuary, which is in a neighbouring district. He said the herd had travelled some 300 kilometers into Kandhamal, and even entered a town in the district. Wildlife officials were camping at the site of the attacks and trying to find out why the elephants had come out of their sanctuary. The villagers say elephants attack their areas in herds, causing heavy destruction.

Gaining momentum, they rampaged through other non-Christian homes, demolishing gardens and singling out the home of persecutors, leaving Christian homes untouched.

These strange attacks have spread, and according to a report, the elephants have already destroyed more than 700 houses in 30 villages, and killed five people. Nobody in this area has seen or even imagined the unique appearance of a herd of wild elephants such as this. The elephants are not ordinary elephants; they appear to be on a mission.

Typically, smaller elephants enter a village first, appearing to survey the community. They then rejoin the larger herd, and larger elephants soon follow and get the job done.

The ministry partner in India stated, "We think that it might have something to do with avenging the blood of martyrs. In fact the fear of God has fallen on the local people, who have labeled these elephants "Christian elephants."

With little help coming from the administration, the villagers have taken to road blockades. "The elephants have destroyed crops and selected houses. But officials too express helplessness. "There is no permanent habitat of elephants in Sundargarh." They come from Bihar, Chhattisgarh and Jharkhand where their habitats have shrunk. But is not clear how and why these elephants reached Orissa.