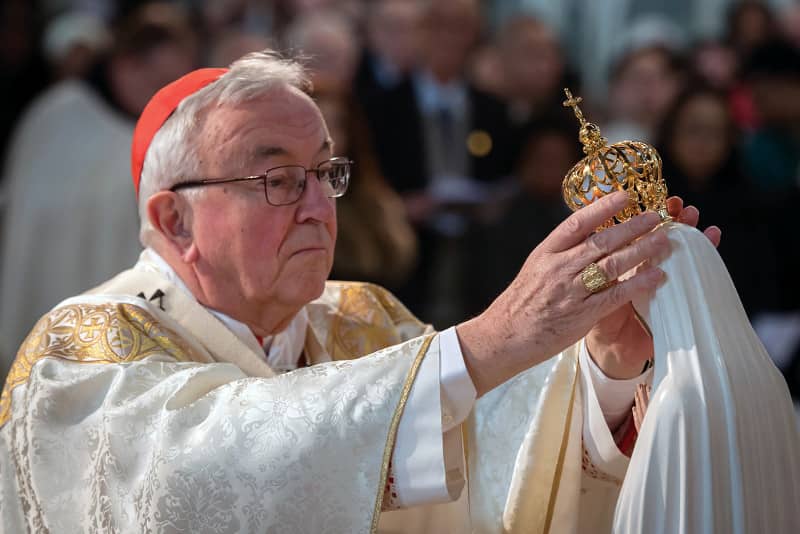 When Pope Francis renewed the consecration to the Immaculate Heart of Mary in Rome on October 13th, 2013, a Marian Day in the Year of Faith, in the presence of Our Lady’s statue from Fatima, Portugal, Cardinal Vincent Nichols was present and made the following comment:

“Devotion to Mary is not an optional ‘add-on’ to Catholic belief, but an expression of what is at the heart of our faith.  To draw close to Mary is to draw close to Jesus.  As the earliest Christian witnesses often taught, Mary was open to receiving Jesus in her mind and in her heart before she gave birth to him in her flesh.  For this reason, she is the first of all the disciples of the Lord as she is the most faithful of all the Lord’s followers.  In her maternal love of us, she continues to assist us in our following of Him; a consecration to her Immaculate Heart gives expression to this in a simple way”.

On February 18th, 2017, Cardinal Vincent Nichols received, blessed and crowned the World Apostolate of Fatima National Pilgrim Virgin statue in Westminster Cathedral during a Mass celebrated for that honor. By a singular favor of Our Lady, and so that she may be worthily honored in her centenary year, a special new silver gilt centenary Crown was made for her statue, by the same firm in Portugal that made the richly bejeweled crown that is only worn at Fatima, Portugal, on the 13th of each month.

During the celebration, His Eminence renewed the consecration of England and Wales to the Immaculate Heart of Mary that had been made by his predecessor, Cardinal Bernard Griffin on July 16th, 1948. These are excerpts from his homily during that Mass:

“In the great Jubilee Year 2000, a crowd of well over half a million people gathered in Fatima. It was May 13th, and they were there for the beatification of Francisco and Jacinta Marto. Among them were children who had dressed up in honor of these newly beatified shepherd-children who had, in 1917, been privileged to receive the Apparitions of Our Lady of Fatima. In the homily, Pope Saint John Paul II had this to say: ‘Dear boys and girls, I see so many of you dressed like Francisco and Jacinta. You look very nice! But in a little while or tomorrow you will take these clothes off and ... the little shepherds will disappear. They should not disappear, should they? Our Lady needs you all to console Jesus, who is sad because of the bad things done to Him; He needs your prayers and your sacrifices for sinners.’

Within these simple words lies a considerable challenge, and not just for excitable children on a visit to Fatima. It is this: How well do we express our discipleship of Christ every day? How are we getting on in those two ways of giving time to the Lord and to others: in those areas of prayer and sacrifice? (…)

“The statue of Our Lady of Fatima, present today in the Cathedral, is on a journey around the cathedrals of England and Wales in the coming months. I pray that this will be a time of grace for many, as they honor Our Lady of Fatima in this centenary year.

“There is another journey I want to speak about, too, a journey which was over in a split second. It was a journey, not of a statue, but of a bullet. Nineteen years to the day, before Jacinta and Francisco were beatified, this bullet sped on its way. It was, as many of you will have guessed, the one fired by Mehmet Ali Ağca as he sought to assassinate Pope St. John Paul in St. Peter’s Square. That bullet was subsequently retrieved and sent to Fatima. Then it was placed within Our Lady’s crown at the shrine. This journey, from an instrument of death to a beacon of reconciliation and hope, is a wonderful allegory of how the prayers of Our Lady and the faith of believers are far, far more than a nice idea. They can truly change the world. Devotion to the Immaculate Heart of Mary, so central to the Message of Fatima, can only begin in our own hearts. ‘The heart open to God... is stronger than guns and weapons of every kind.’ So wrote the future Pope Benedict. They are words that we do well to make our own as, this year, a second century of the story of Fatima begins.

After the Mass the faithful, of which there were over 4,000, with hundreds more outside in the plaza, were invited to come forward for the veneration of the relics of Saints Jacinta and Francisco, the two young visionaries of Fatima in 1917, and also to participate in the special devotions commemorating the 100th Anniversary of the Apparitions of Our Lady at Fatima.