Cardinal Marc Ouellet: A man of substance has a meteoric rise 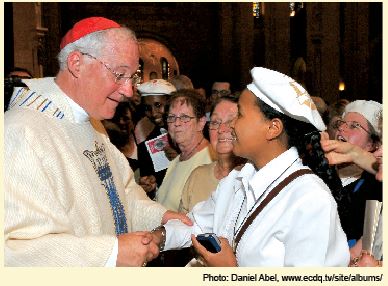 When Father Marc Ouellet left Edmonton’s St. Joseph Seminary a mere 13 years ago for a prestigious professorship in Rome, we saw this as a feather in his cap. Few, if any, could foresee that five years later he would be the primate of the Church in Canada and that in 2010 he would become the highly influential prefect of the Vatican Congregation for Bishops.

Life – and the Holy Spirit – has a way of doing things like that to people. It picks them when they are least expecting it and places them in roles beyond anything they had anticipated filling. Certainly, Ouellet was/is nothing close to being a ladder-climbing careerist. He was a leading scholar on the theology of Hans Urs von Balthasar and because of that caught the eye of Cardinal Joseph Ratzinger.

Ouellet is also a man of considerable substance. Even before coming to Edmonton, he had a global outlook on the Church and an evangelical vision for its future.

One Quebec newspaper columnist’s characterization of him as an “extremist” is laughable. Ouellet’s cosmopolitan experiences and studies have taken him far beyond the parochialism of his home province. What the cardinal does have is courage. It is the courage to speak the truth when others want to dance around it.

With courage and charity, Ouellet has named the downward spiral on which Quebec’s hard-edged secularization has taken it. He does not even see his comments as courageous. They are just the reiteration of Church teaching in his own social milieu, something every bishop should do as a matter of course.

Ouellet has made his own the words of Pope John Paul in his 1988 statement on the laity: “The Christian faith constitutes the only fully valid response to the problems and hopes that life poses to every person and society.”

Now, Ouellet will be the one taking recommendations for episcopal appointments to the pope. In Quebec, where he knows the lay of the land, that will have considerable significance. Over the next five years, new diocesan bishops will have to be appointed for 10 of the 19 Latin rite dioceses, including four of the five archdioceses. The recommendations for those appointments will come from Canada and the pope will make the appointments. But along the way, Ouellet will have ample opportunity to put his stamp on the process.

At the 2005 conclave where Pope Benedict XVI was elected, Ouellet’s name was mentioned ahead of other North Americans as a possible choice for the papacy. Thanks to his latest appointment and to his exemplary record in Quebec, his name will likely be raised even more prominently at the next conclave.

Would he be the right choice for pope? That’s not up to us to say. But given his meteoric rise since he left Edmonton 13 years ago, nothing would be surprising anymore.

The Western Catholic Reporter (www.wcr.ab.ca) is Canada’s largest circulation weekly religious newspaper, and is published by the Archdiocese of Edmonton.