Peace be to you. The subject about to be discussed is birth control. The words are not very proper, first of all, because those who believe in it actually believe neither in birth nor in control. Therefore, we shall never use the words again; they are finished.

We propose first to answer one or two objections or false philosophies about the subject of the purpose of marriage.

The first is this: Married couples will often say, “We cannot afford more children; therefore, we have a right to fumble with the levers of life.” Those who make a statement of this particular kind probably never think of the terrible principle that they are enunciating.

Namely: the primacy of the economic over the human.

Now just suppose one put that into practice in other walks of life.

Suppose a husband says that he can no longer support his wife. Ought he be entitled to shoot her?

What is forgotten here, in giving the primacy to the economic, is that we receive blessings as we put ourselves in the area of God’s love. A waif on the street does not receive food, clothing, and shelter as a child in a family because that waif is outside the environment of love. So too, to the extent that we put ourselves outside of the environment and area of God’s love, we exclude those divine assistances that would otherwise come to us.

They believe that they are free, therefore, as we said, to manipulate life apart from God’s laws because it is only Catholics that are bound by the laws of fruitfulness of marriage. So they say that Catholics are opposed to any frustration of human life in marriage. That indeed is true.

But it must be remembered that those who are not Catholics are no more free to violate God’s natural law than anyone else. It just happens here that the Church is defending a natural law. And because we are about the only ones who are defending it, there are some who are led into the error of believing that the opposition to the frustration of love is purely and solely a Catholic doctrine.

We could conceivably reach a stage in the world where Catholics alone might believe that 2 and 2 make 4, and that grass is green in the springtime. These are principles that belong in the natural order. So is the principle that marriage is destined to be fruitful.

Just suppose that a vast majority of people went around with their eyes blindfolded and their ears plugged up. We would very soon have a papal encyclical which would oppose that. And the Church would say, “It is not right to blindfold your eyes or to plug up your ears. Does not reason, does not the natural law tell you that the eyes were meant for seeing and that the ears were made for hearing? Therefore, you must allow these organs to work out the function for which God created them.”

There indeed would be many that would say “Oh, the Catholic Church is opposed to eye control. The Catholic Church is in opposition to ear control.” Certainly! Because reason tells us why these organs were made. So too, a husband and wife were made in a certain way and God created male and female in a certain way, and therefore these organs are to be permitted to function according to the way that God made them.

What are we going to make this world? A universe in which we pick up violins and bows and never produce music? A universe in which sculptors pick up chisels and never touch them to marble in order to create a statue? Are we going to have trees blooming, but never any fruit? Sign posts that lead nowhere? Is life and love to be reduced to a kind of epidermal content and contact without any fruit or purpose? 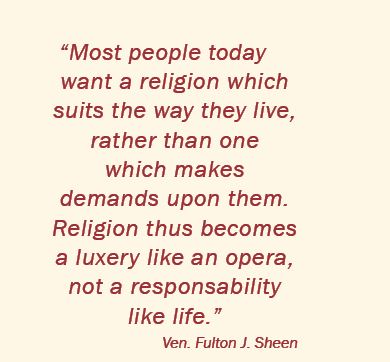 But that is all negative. We must always take the positive position. And on this particular subject of the fruit of love we will describe and enunciate two sublime teachings. One, love in marriage creates the deepest kind of unity. And secondly, that deep unity of love by its very nature tends to an incarnation.

We said that love creates the deepest kind of unity of love. We might also say, by the way, that this particular point that we are to develop proves also that there is not to be union of sexes outside marriage. Have you ever noticed that Scripture nowhere speaks of marriage in terms of sex, but always in terms of knowledge? Why is that?

The angel Gabriel announced to the Blessed Mother that she was chosen to be the mother of our Blessed Lord, and she asked, “How can this be since I have no knowledge of man?” Notice here that there was no question of the ignorance of conception, but of some deeper mystery.

St. Paul says, “Husbands possess your wives in knowledge.” Why is marriage spoken of as knowledge? Well, for this reason: Because one of the closest forms of unity in the natural order is that which comes from knowledge. You look out on a flower or a tree; you know these things. They enter into your mind. There begins to be a unity, the closest kind of unity in the natural order between the knower and the thing which is known. You cannot think of anything more close than the union of your mind with that which you know.

So Sacred Scripture compares marriage to knowledge, because marriage produces a unity and it demands fidelity. When a man knows a woman, there is a unity that is created between the two that is like to the union of the mind and that which is known. That unity is so close, so intimate, that it may be used over and over again, but it never again may be re-acquired. They are two in one flesh. From that point on, there is nothing that happens to a woman that does not happen to the man that made her a woman. He made her a woman; she made him a man.

Just as you are always indebted to the one that gave you the knowledge about Shakespeare, namely our Alma Mater, so too one is always indebted to the one who created that unity between the two. The resulting psychic changes indeed are great but they are great also in the order of the body. The woman can never again return to virginity; the man cannot return to ignorance. Something has happened to make them one, and from that oneness comes fidelity, so long as either has a body. They can never put themselves back into a state that they had before.

Therefore, it is not just an experience; it is a bond that continues to exist as long as life itself.

Now, in married couples this union is very deep, and that brings us now to our second point – that all love tends toward an incarnation. Thus far, we have spoken of the love of husband and wife creating a deep bond of unity, a unity of love. Now we want to show that this love naturally tends to diffuse itself.

Let not, therefore, husband and wife be told that procreation is in imitation of the beasts of the field. It is rather in imitation of God who from all eternity has an eternal Son, the Son to whom he can say in the agelessness of eternity, “Thou art my Son. This day have I begotten thee.” This day, without beginning or end. Now this power of generation, which is eternal in the Godhead, is communicated to man’s mind, it is communicated to the body of a husband and to the body of a wife.

God said, “Shall I make others bring forth children and myself be barren?” Therefore, the power of generation is not a push from below, it is a gift from above. Not only do we find therefore that the motive power of begetting children is in the Trinity, but it is also in the Incarnation because all love ends in an incarnation – even God’s. God so loved man, He became enfleshed in the human nature.

What is our Blessed Lord but God’s love incarnate? God’s love walking this earth in form and habit of man.

You see how beautiful love is?

The thrill of a farmer as he sees a grain of wheat he planted coming into life; the joy at seeing a geranium bud in that tin full of earth on the tenement window sill; the ecstasy of a saint at seeing a sinner dead in sin responding to prayer and beginning to live life: all these are earth’s witnesses to the inherent happiness that comes to anyone who sees life springing and sprouting or a-borning.

Love does not mean just the joy to possess. It means the will to see a new life born of that love, to see someone created in one’s own image. And what is the child? The child becomes the bond of union between husband and wife. The child unveils fatherhood in the husband and motherhood in the wife.

There is a new relationship created. Not only did the father make his wife a mother, but the child made him a father. See, love becomes a kind of an ascension from the sense plane, and goes back again to God. Children are almost like beads in a rosary, binding together the love of husband and wife.

Love always demands something unrevealed; it flourishes only in mystery. No one ever wants to hear a singer hit her highest note; nor to hear an orator carry passion to tatters, to very rags. One never wants to see the infinite denied or life’s urge stilled or a passion bloodied. One wants to see an unfolding, an enrichment, an enfleshment of love.

New areas of exploration are opened up. There’s never dullness. Indeed, the husband after a time can become dull to the wife and the wife to the husband. But, when the children are born…the first boy…Well, he begins to be the new life of the husband all over again. The wife becomes very pretty once more. The daughter… As each child is born they bind together husband and wife as a reflection of the binding love of the Holy Spirit. And because each child has a soul to save, there becomes an awakening of sweet responsiveness.

As Kahlil Gibran wrote when he spoke of children, he said: “Your children are not your children. They are the sons and daughters of life’s longing for itself. They come through you, but not from you. And though they are with you, yet they belong not to you. You may give them your love but not your soul, for they have their own souls. You may house their bodies, but not their souls. For their souls dwell in the house of tomorrow that you cannot visit even in your dreams. You make strive to be like them but seek not to make them like you, for life goes not backwards nor tarries with yesterday.

And that is the story of life. God sets up the target, you are the bow, and you children are the arrows. You have a messianic mission. In your life, you represent the conquest of love over the ego. You symbolize the defeat of your selfishness, and represent the victory of charity. Every child begets sacrifice, tends toward an incarnation, and every child becomes for you a pledge of your own salvation. How happy you will be on judgment day when God says, “Your love has borne fruit.”

If God did not bless you with children, in any case you can also rejoice that you’ve never buried love in a napkin. You sent it back again to God, from which it came.