Beatification of Louis and Zelie Martin

The parents of St. Therese of the Child Jesus

On October 19, 2008, World Mission Sunday, Louis Martin and Marie Zelie Guerin, the parents of St. Therese of the Child Jesus, were declared blessed in Lisieux, France, by Cardinal Jose Saraiva Martins, retired prefect of the Congregation for the Cause of Saints. It was only the second time in history that a married couple has been beatified. (The first couple being Luigi and Maria Quattrocchi of Italy, in 2001.) Here are excerpts from their biography, read during the ceremony by Father Antonio of the Mother of God, O.C.D., Vice Postulator: 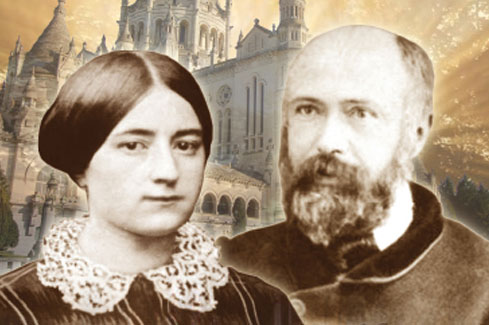 Louis Martin was born in Bordeaux on August 22, 1823. At the end of his studies in Alençon, he didn’t turn toward a military career like his father, but chose the profession of watchmaker. A man of faith and of prayer, for a time Louis wished to enter the priesthood. In 1845, he went to the Swiss Alps to enter a Carthusian monastery, where his first task was to learn Latin. He tried to learn it but in the end gave up. Having finished his watchmaking studies in Rennes and Strasbourg, he returned to Alençon, where he dedicated himself to his work as a watchmaker-jeweler with diligence and honesty.

Zelie Guerin was born at Gandelain, near Saint-Denis-sur-Sarthon, on December 23, 1831. When her father retired in 1844, the family moved to Alençon. Zelie studied under the Sisters of Perpetual Adoration. She received training that made her a very skillful lacemaker. She made the famous Point d’Alençon, and she was in charge of sales for her own lacemaking business. Like her sister Marie-Louise, now a religious at the Visitation convent in Le Mans, Zelie wanted to consecrate herself to the Lord. After a discussion with the Superior of the Daughters of Charity at the Alençon hospital, she understood that it was not the will of God.

A providential meeting united these two young people thirsty for the Absolute. One day, as Zelie crossed the Saint-Leonard Bridge, she passed a young man with a noble face, a reserved air, and a demeanor filled with an impressive dignity. At that very moment, an interior voice whispers in secret, "This is he whom I have prepared for you." The identity of the passer-by was soon revealed. She came to know Louis Martin.

The two young people quickly came to appreciate and love each other. Their spiritual harmony established itself so quickly that a religious engagement sealed their mutual commitment without delay. They did not see their marriage as a normal arrangement between two middle-class families of Alençon, but as a total opening to the will of God.

From the beginning, the betrothed couple place their love under the protection of God, who, in their union, would always be "the first served." Their marriage was celebrated at midnight on July 13th, 1858 in the parish of Notre-Dame d’Alençon.

Louis and his spouse decide at the beginning of their marriage to maintain perfect chastity. Shortly thereafter, they welcome into their home a five-year-old boy whose widowed father was crushed by the burden of raising eleven children. However, Divine Wisdom, which leads all with "strength and gentleness," has other views for this couple, and at the end of ten months, on the advice of a priest friend, they change their minds. They now desire to have many children in order to raise them and offer them to the Lord. 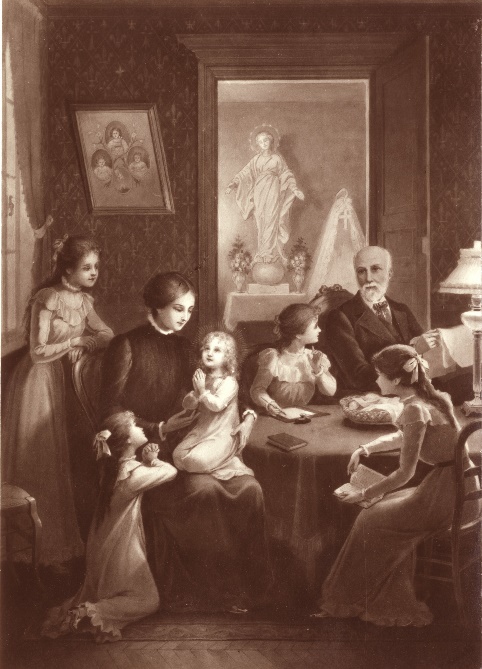 The union of Louis and Zelie is blessed by the birth of nine children. The work of both spouses obtains for them a certain wealth, but their family life is not without trials. In this time of high infant mortality, they lose four children at an early age, at a time when they want to have a son to become a priest. But neither the bereavement nor the trials weaken their confidence in the goodness of God’s plans, and they abandon themselves with love to His Will. (The surviving children, five girls, will all become nuns, four of them in the carmelite monastery.)

The education of the children is at the same time joyful, tender, and demanding. Very early, Zelie teaches them the morning offering of their hearts to the good God, the simple acceptance of daily difficulties "to please Jesus." An indelible mark that is the basis of the little way taught by the most celebrated of their children: Therese. One cannot conceive of the growth in holiness of Therese and the religious vocations of her sisters independent of the spiritual life of Mr. and Mrs. Martin, at the heart of their vocation to family life.

Towards the end of 1876, an old growth in Mrs. Martin’s breast returns. Discovered too late, the cancer is inoperable. At half past midnight on August 28, 1877, she dies in Alençon. Louis is left with five children: Marie, Pauline, Leonie, Celine, and Therese, who is four and a half years old.

Louis consults with his elder daughters, and decides to move to Lisieux to live close to the family of his brother-in-law, Isidore Guerin, and thus to ensure a better future for his children. Life at the Buissonnets, the new house in Lisieux, is more austere and withdrawn than at Alençon. But the most admirable work of this father, an exemplary educator, is the offering to God of all his daughters and then of himself. In his unshakable submission to the will of God, like Abraham, he places no obstacle to these vocations and considers the offering of his children to the Lord as a very special grace granted to his family.

Shortly after the entry of Therese into the Carmel of Lisieux, during a visit to the parlor of the monastery, Louis tells his daughters that at the Church of Notre-Dame of Alençon (May 1888), as he was reconsidering his life, he had said: "My God, I am too happy. It’s not possible to go to Heaven like that. I want to suffer something for you." "And," said he, "I offered myself." Louis doesn’t dare pronounce the word "victim," but his daughters understand this. This confidence really strikes Therese, who, several years later, offered herself as a victim to the Merciful Love of God (June 9, 1895).

The last years of the life of Mr. Martin, "the patriarch", as he is affectionately called by those close to him, are marked by several health problems. He knows the humiliation of illness: a cerebral arteriosclerosis with a long hospitalization at the Bon Sauveur in Caen in 1889, where he filled those around him with admiration and respect. Returning to Lisieux in May 1892, from then on paralyzed and almost unable to speak, he dies peacefully on Sunday, July 29, 1894.

On March 26, 1994, the Servant of God, John Paul II, declares the individual heroic virtues of the Martin couple. In 2008, the Medical Commission of the Congregation for the Causes of Saints declared inexplicable by science and general knowledge the healing of the young Pietro Schiliro, of Monza, Italy. Born on May 25, 2002, Pietro suffered from a serious condition following the inhalation of meconium, which led to serious pulmonary complications. The unexpected healing came about on June 29, 2002, after a novena of prayers to the Venerable Servants of God Louis and Zelie Martin. On July 3, Pope Benedict XVI approved the miracle of Pietro’s healing, accomplished by God through the intercession of the Venerable Servants of God, Louis and Zelie, "incomparable" parents of Saint Therese of the Child Jesus, and he set October 19, 2008, as the date of their beatification, and July 12 as their feast day on the liturgical calendar.

In his homily, Cardinal Saraiva Martin, the Prefect of the Congregation for the Causes of Saints, said that in a time of crisis for the family, the family has in the Martin couple a true model. He also offered them as a model for people who face illness and death, as Zelie died of cancer, leaving Louis to live on through the trial of cerebral arteriosclerosis. He said that they teach us to face death, abandoning ourselves to God. Here are excerpts from his homily:

Therese wrote in a letter to Father Belliere, and that many people now know by heart: "God gave me a father and a mother who were more worthy of heaven than of earth". This beatification of Louis Martin and Zelie Guerin, whom Therese defined as "parents without equal, worthy of heaven, holy ground permeated with the perfume of purity" is very important in the Church.

My heart is full of gratitude to God for this exemplary witness of conjugal love, which is bound to stimulate Christian couples in practicing virtue just as it stimulated the desire for holiness in Therese. While reading the Apostolic Letter of the Holy Father, I thought of my father and mother, and now I invite you to think of your parents that together we may thank God for having created and made us Christians through the conjugal love of our parents. The gift of life is a marvelous thing, but even more wonderful for us is that our parents led us to the Church which alone is capable of making us Christians. For no one becomes a Christian by oneself.

Among the vocations to which individuals are called by Providence, marriage is one of the highest and most noble. Louis and Zelie understood that they could become holy not in spite of marriage, but through, in, and by marriage, and that their becoming a couple was the beginning of an ascent together. Today the Church celebrates not only the holiness of these children of Normandy, a gift to us all, but admires, as well, in the Blessed couple that which renders more splendid and beautiful the wedding robe of the Church. The conjugal love of Louis and Zelie is a pure reflection of Christ’s love for his Church, but it is also a pure reflection of the "resplendent love without stain or wrinkle, but holy and immaculate" (Ep 5, 27) as the Church loves its Spouse, Christ.