James Fulton Engstrom was born on September 16, 2010. The following is his Mom’s account of the “miracle” of Jame’s unexplainable recovery. It was written on the first anniversery of the alledged miracle, which the family attributes to the intercession of Venerable Archbishop Fulton J. Sheen.

On June 17, 2014, the Diocese of Peoria reported that its bishop, Daniel Jenky, had been informed of the decision of the seven-member theological commission, which had unanimously ruled, that James’s recovery was miraculous.

Archbishop Sheen was known throughout the United States for his radio programs to teach the Catholic Faith. He hosted the popular, Emmy-award winning television show, “Life is Worth Living”, which aired in the 1950’s and 1960’s, and he is author of numerous books. He was auxiliary bishop of New York, and Bishop of Rochester. If Pope Francis approves this decision of the theological commission, Archbishop Sheen will be declared Blessed. He died in 1979 at the age of 84.

One year ago today (This story was written in 2011) I delivered my son, a stillborn. For a moment he was placed in my arms quiet, blue, and limp. The midwife and her assistant then took him from me and began CPR. They could not find a pulse. He did not breathe. Because we were at home (it was my third, planned homebirth) 911 was called.

The paramedics came and rushed James away. In route, as they tried to restart his heart, they gave him two doses of epinephrine by lines in the shin bone. Neither worked and one leaked out, turning his whole right leg – from toe tip to buttock – black and blue and purple. In the ER the doctors and nurses worked on him for another 18 minutes or so. A nurse practitioner told me she wanted James’ mother to be able to hold him alive for a little bit. Five minutes, an hour – she just wanted my son to be alive long enough for me to say good-bye.

They did a sonogram of his heart. It fluttered but it didn’t beat. A nurse held his foot; she later told me it was cold, like the expression “cold and dead”. He was incubated and getting oxygen, but there was no way that the chest compressions were adequately circulating the oxygen to the brain and other organs. Following the orders of the on-call neonatalogist they stopped working on him so they could call time of death.

My little boy, James Fulton, 9lbs and 12oz, had been without a pulse for 61 minutes.

Everyone stopped working. And then his heart started. James was admitted to the NICU at the Children’s Hospital of Illinois and was immediately “cooled” – a newer type of therapy where they lower the body’s temperature by a few degrees in an effort to spare the brain and other organs further and ongoing damage. For three days he was sedated and shivering, covered in tubes and wires. They thought that he would not live to be a week old. They thought he would have to lose his right leg because of the chemical burn. They thought that if he did live he would be a “vegetable”. They tried to give us hope, but they thought that he would probably spend the rest of his life strapped in a wheelchair, blind, severely mentally disabled, on a ventilator, fed through a feeding tube, in diapers, unable to communicate love.

EEG’s showed very abnormal brain activity. An MRI showed that the brain had been injured from the severe lack of oxygen.

At times I wondered if we should have just stayed home and never called 911. I worried that I had become Dr. Frankenstein and had, through other people, manipulated James into life. I worried that he would be treated like a monster.

In the situation we were in I could either worry or I could hope. I could fear or I could trust. We had prayerfully decided to have a homebirth and so I knew that we were following God’s plan for our lives. I didn’t know where we would end up, but I knew that I could not live in the dark – I had to hope and trust – I had to live in the Light.

So we prayed, and we asked people to pray with us. Two days after his birth 100 people, many I barely knew, came to the Peoria Diocese’s cathedral. In the church where Fulton Sheen served Mass and was later ordained, we had a holy hour and Mass. As a group we prayed for Sheen’s intercession: Eternal Father, You alone grant us every blessing in Heaven and on earth, through the redemptive mission of Your Divine Son, Jesus Christ, and by the working of the Holy Spirit. If it be according to Your Will, glorify Your servant, Fulton J. Sheen, by granting the favor I now request through his prayerful intercession – that James Fulton’s body heals and functions normally and that he is spared any brain damage. I make this prayer confidently through Jesus Christ, our Lord. Amen. 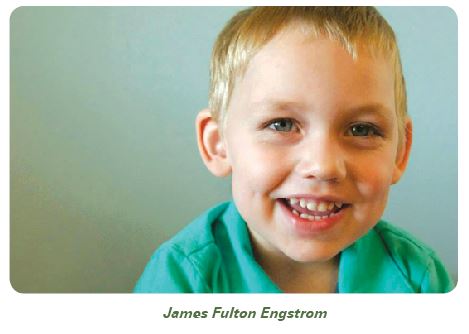 Friends told James’ story on Facebook, in emails, on blogs, and to their prayer groups, prayer chains, Bible studies, family members, and friends. People in Alaska, New York, Mexico, Peru, Germany, Ireland, and Canada prayed for my son, asking for Sheen’s intercession. Atheists asked their believing friends to pray for him. Classrooms of children in Catholic schools throughout Illinois recited the Sheen prayer every day. Little children adopted him as their main prayer intention. My dad began attending Mass again on a regular basis.

And God answered the prayers. Jesus Christ healed my son. The Holy Spirit filled the hearts of His faithful. And Sheen continued to evangelize through his namesake and my son. By the time he was a few days old his kidneys, liver, and colon were all working. His leg was healing. By a week he was breathing without any assistance. His blood pressure was good. He began eating by bottle. He was taken off pain meds and started to interact with me, his visitors, nurses, and doctors. At seven weeks he came home from the hospital. A follow-up MRI showed no more brain damage. The precautionary g-tube was removed when he was six months old. Now he rolls over, crawls, cruises, and will walk soon. He eats Cheerios, picking them up with his thumb and pointer finger. He squeals with laughter, plays with blocks, steals toys from his older siblings, and has scored in the normal / age appropriate range by his developmental and physical therapist.

My family and I believe that God brought James back from the dead and healed his body. We believe that He did this through the intercession of Archbishop Sheen. We believe that God did this for the same reason that he allowed Lazarus to die: “This sickness is not to end in death, but for the glory of God, so that the Son of God may be glorified by it.”

Today (2011) my son is one year old. Thank you, Jesus, and Happy Birthday, James Fulton! v

Reprinted with permission. This story originally appeared at

Ignitum Today. Bonnie’s blog, A Knotted Life, can be found at