Another Eucharistic Miracle in Poland 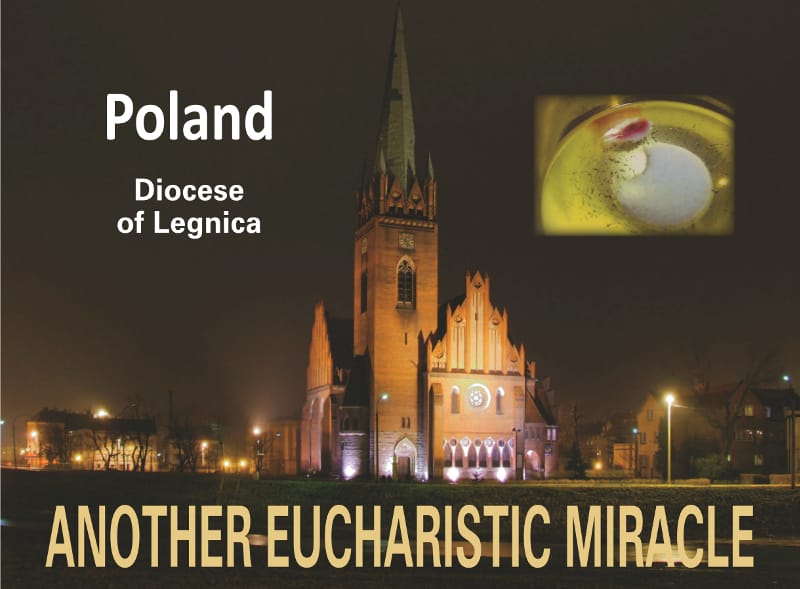 On December 25th, 2013, in the church of St. Jacek, in the Diocese of Legnica, a Host fell on the floor during the distribution of Holy Communion at the Holy Mass. It was then put in a container (vasculum) with water to dissolve but, after some time it turned red.

The then Bishop of Legnica, Stefan Cichy, appointed a Commission to study the phenomenon and in February of 2014, the Commission ordered the taking of samples of the Host, a tiny red fragment, which was placed on a corporal, to conduct tests by different authorities.

The Department of Forensic Medicine stated that “the histopathological tissue fragments were found containing fragmented parts of the skeletal muscle...most similar to the heart muscle “ It was determined that the studies indicate the fragment was tissue of human origin.

The matter was presented to the Congregation for the Doctrine of the Faith for review. A message from the Bishop of Legnica, Zbigniew Kiernikowski, on this matter was issued and was read on the fourth Sunday of Easter, April 17th, 2016, in all the Churches of the Diocese.

Sisters and Brothers in Our Lord Jesus Christ!

As The Bishop of Legnica I hereby announce to the public and inform them of an event that took place in the parish of St. Jacek in Legnica, which has the signs of a Eucharistic miracle. On 25th December, 2013, during the distribution of Holy Communion, a consecrated Host fell to the floor and then was picked up and placed in a water-filled container (vasculum). Soon after, stains of a red color appeared. The former Bishop of Legnica, Stefan Cichy, set up a commission to observe the phenomenon. In February 2014, a tiny red fragment of the Host was seperated and put on a corporal. The Commission ordered to take samples in order to conduct appropriate tests by different competent authorities.

In the final announcement of the Department of Forensic Medicine we read as follows: In the histopathological image, the fragments of tissue have been found containing the fragmented parts of the cross striated muscle. (...) The whole (...) is most similar to the heart muscle with alterations that often appear during the agony. The genetic researches indicate the human origin of the tissue.

In January this year I presented the whole matter to the Congregation for the Doctrine of the Faith in the Vatican. Today, according to the Holy See, I recommended that the parish priest, Andrzej Ziombrze, prepare a suitable place for the Relic so that the faithful might give proper adoration. Hereby, I also ask for visitors to be provided with the proper information and to conduct relevant teaching (catechesis) to help properly form in their understanding of eucharistic worship. Moreover, I’m ordering that a book be provided to record any graces received or other supernatural events.

I hope that this will serve to deepen veneration of the Eucharist and will profoundly impact the lives of those approaching the Relic. We see this marvelous sign as a special expression of God’s kindness and love, Who so humbles Himself before man.

I cordially ask for your prayer and I bless you,

The head of the Archdiocese of Białystok, Archbishop Edward Ozorowski, told Catholics at a Mass celebrated on that day that, “the substance of Christ’s Body or Blood has become available to the human senses, and this also happened in Sokółka” (story also in this issue of MICHAEL). The bleeding Host was displayed in a reliquary and carried in procession by a priest of that parish, with about one thousand faithful following.

Perhaps it is not a coincidence that the announcement of this confirmed Eucharistic miracle, made by Bishop Zbigniew Kiernikowski, coincides with the 1,050th anniversary of Christianity in Poland (966-2016). Poland’s president, Andrzej Duda said on April 15, 2016, ”Poland’s invincible national spirit and resilience to countless foreign invaders lies not with her government or military, but in the nation’s Christian identity...The baptism of Duke Mieszko I (966 A.D.) is the most important event in the entire history of the Polish state and nation. I do not say it was, I say it is, for the decision taken by our first historical ruler had predetermined the whole future to come for our country.”

After a forsenic study, the bishop of Legnica officially approved and promotes the miracle of a bleeding host in his diocese.
Tweet