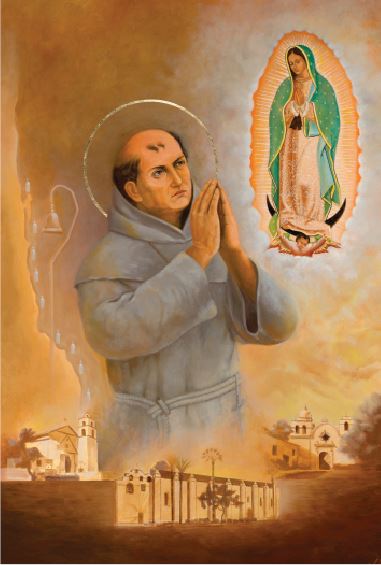 On September 23, 2015, in the Basilica of the Immaculate Conception in Washington, D.C., Pope Francis canonized Fray Junípero Serra, a Spanish-born Franciscan Friar known for founding Spanish missions in California in the 1700’s. He performed the canonization ceremony at the Basilica of the National Shrine of the Immaculate Conception saying that Washington would be a fitting location as there is a statue of Blessed, now Saint Junípero, standing in the National Statuary Hall in the U.S. Capitol. Pope Francis had pointed out earlier, while visiting the Pontifical North American College in Rome, “He (St. Junípero Serra) was one of the founding fathers of the United States, a saintly example of the Church’s universality.”

Fray Junípero Serra was born on November 24, 1713 in Majorca, the largest of the Balearic Islands off the eastern coast of Spain. Baptized Miguel José, he was the son of Antonio and Margarita Serra, who soon after the birth of their baby boy, made a pilgrimage to the shrine of Nuestra Señora de Buen Ano (Our Lady of the Good Year) and consecrated their son to her loving care. He was ordained a priest in the Franciscan Order on Sept. 15, 1731 (Feast day of Our Lady of Sorrows), making the formal profession of the vows of poverty, chastity and obedience. He chose the name, Junípero, to honor the first companion of St. Francis of Assisi.

Fr. Serra began his vocation as a successful teacher and preacher, obtaining his doctorate in theology in 1742 from the Lullian University, Palma. He was called to the chair of theology at the same university as the primary professor. Very soon though, feeling a special calling by God, he chose the more dangerous role of missionary, and travelled to North America where the Franciscans already counted 115 martyrs who had died spreading the Gospel in the New World. It was while waiting to set sail that Serra wrote a long letter to a colleague back in his hometown of Majorca, asking him to console his parents — now in their 70’s — by reading to them his letter. (Fr. Serra’s parents had never attended school.) The following is an excerpt:

”Words cannot express the feelings of my heart as I bid you farewell, nor can I properly repeat to you my request that you be the consolation of any parents to sustain them in their sorrow. I wish I could communicate to them the great joy that fills my heart. If I could do this, then surely they would always encourage me to go forward and never to turn back…”

He left Cadiz, Spain in 1750, and arrived in Vera Cruz, Mexico where he then set out on foot to Mexico City on pilgrimage to the Shrine of Our Lady of Guadalupe. Kneeling before the holy tilma of St. Juan Diego, he dedicated his entire mission to the Blessed Mother, setting right to work, beginning in north-central Mexico, and laboring for over seventeen years among the people there, before moving on to Baja, California.

The apostle of California

Fr. Serra was in his mid thirties when he reached California, and he suffered from asthma and an inflamed ulcerated leg. Despite his poor health, he worked tirelessly among the natives and endured many hardships, traveling between missions by foot or by mule, rather than by the easier, more comfortable mode, by horse or ship. Some accused him of being a strict disciplinarian, but there was no doubt that he was strictest with himself, wearing a hair shirt and lashing himself regularly with iron chains. 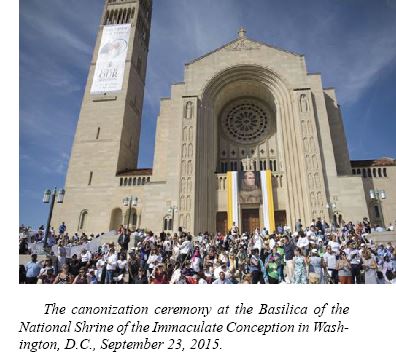 His first established mission was in San Diego where, before leaving there to found another mission in Monterey, Fr. Serra left Friar Luís Jayme to take over. Fr. Luís was a clever and talented man and had devoted himself to mastering the complexities of the local native language. He was able to compile a polyglot Christian catechism for use in their catechesis. When there was a surprise attack upon the San Diego mission by the Yuman Indians, Fr. Luís tried peacefully to defend the mission. The attackers seized him, stripped him of his robes, then pierced his torso with eighteen arrows and pulverized his face with clubs and stones. His last words were, “Love God, my children!” Fr. Luís Jayme was California’s first martyr.

When Fr. Serra received word of the attack, he was at the Monterey mission, San Carlos Borroméo, in Carmel. Prophetically he declared, “Thanks be to God! Now that the terrain has been watered by blood, the conversion of the Indians will take place”…and so it did. Twenty-one missions were established throughout California, nine of which were founded by St. Junípero Serra. His mission prospered through the introduction of domestic animals, the fostering of agriculture, and the development of commerce. He also defended Indian rights against non-native settlers in protracted contests. During building operations on his missions, he worked as an ordinary day laborer. About ten percent of the population of presentday California were brought into the Church. He baptized 6,000 natives and confirmed 5,000, including three of the Indians that had murdered Fr. Jayme, another poignant demonstration of Divine Grace and Mercy.

It was his devotion to the Blessed Virgin that gave him the strength and the courage to continually forge ahead. He had been given a statue of Our Lady of Bethlehem at the very beginning of his mission on this continent by the Archbishop of Mexico City, the Most Reverend Francisco de Lorenzaña, with the instructions that she be the Conquistadora of the new land. The statue which, coincidentally, measured Fr. Serra’s own height of 5’2”, was placed in honor in his first mission, then carried with him to the mission ôf San Carlos Borroméo in Carmel. This statue can still be seen today and is visited by thousands of pilgrims yearly.

Today, the humble Mission of San Carlos Borroméo has been granted the honor of the title, Basilica, and is a witness to Fr. Junípero Serra’s life and the place where the saint’s remains were laid to rest. But most especially, it is a witness to the perseverance and bravery of all the many missionaries who leave home and family to travel to a new and untamed world to preach the Gospel and bring the Love of Christ to a new people.

Many do not know that in 1847, the United States Catholic bishops, led by Archbishop John Carroll of Baltimore, received approval from Blessed Pope Pius IX to consecrate the United States to Mary under Her title of the Immaculate Conception. This was seven years before Pope Pius IX did proclaim the dogma of the Immaculate Conception on December 8, 1854.

In 1943, when a count was made of all the churches in the United States, of the 4,817 churches dedicated to Our Lady, 637 of these were named in honor of her Immaculate Conception. The United States is indeed the land of Mary Immaculate. Fr. Junípero Serra being raised to the altar as a saint of the Church in the National Shrine of the Immaculate Conception in Washington, DC, is no mere coincidence; Heaven desired it.