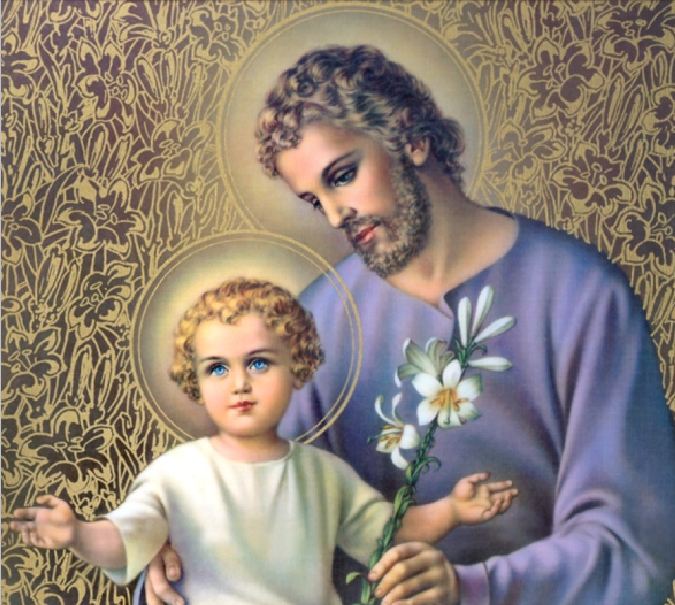 “O St. Joseph whose protection is so great, so strong, so prompt before the Throne of God, I place in you all my interests and desires. O St. Joseph do assist me by your powerful intercession and obtain for me from your Divine Son all spiritual blessings through Jesus Christ, Our Lord; so that having engaged here below your Heavenly power I may offer my Thanksgiving and Homage to the most Loving of Fathers. O St. Joseph, I never weary contemplating you and Jesus asleep in your arms. I dare not approach while he reposes near your heart. Press Him in my name and kiss His fine head for me, and ask Him to return the kiss when I draw my dying breath. St. Joseph, patron of departing souls, pray for us. Amen.”

(It is believed that this prayer to St. Joseph may date back to as early as the 1st century A.D. In the 1500’s the Pope sent this prayer to the Emperor Charles as he was going into battle, with the promise that, “Whoever reads this prayer or hears it or carries it, will never die a sudden death, nor be drowned, nor will poison take effect on them. They will not fall into the hands of the enemy nor be burned in any fire, nor will they be defeated in battle.”)

(This prayer is available in wallet-size holy cards - card stock or laminate) and can be ordered through our website - www.michaeljournal.org)

This is the story of one soldier’s faith in the powerful protection of St. Joseph through his devotion to this beautiful prayer above… and to the Blessed Mother through the “Miraculous Medal”…

I am a retired military veteran of 33 years. I have served in both the Viet Nam and the Iraq wars. My devotion to St. Joseph through this miraculous prayer was handed down to me from both my grandfather and my father who were also Veterans having served in W.W.I & W.W.II. They both carried this prayer on their person all through the war, praying it faithfully daily, and both returned home from the war unharmed. I have passed out thousands of copies of the prayer to St. Joseph, along with the Miraculous Medals of the Blessed Virgin Mary to young soldiers leaving for Iraq and Afghanistan. It is my desire to share my own testimony of the power of this miraculous prayer.

I was stationed for my training in Fort Drum, N.Y. There were over 500 men and women soldiers in my Battalion alone. I know that at least 80% of these soldiers were Catholic, yet I was the only one who went to Mass on Sundays. I decided that the first thing to do was to make sure that each soldier received a copy of the prayer of St. Joseph along with a Miraculous Medal of Our Lady. I was the squad leader and I did what I could to try to encourage everyone in my Battalion to attend Mass. I also called my family back home and asked them all to pray. After two weeks, I had two guys join me for Sunday Mass. Then within 2 1/2 months, with my family praying hard, we had 33 more soldiers going to Mass. Then once we deployed to Iraq, more and more soldiers joined us each Sunday.

In 2002 at the age of 57, our platoon was again being deploying to Iraq. I handed out this same prayer of St. Joseph along with a Miraculous Medal of the Blessed Mother to all the soldiers going with me; from the Company Commander to the lowest rank. I only had one individual who refused these religious items. One young soldier told me that he was not Catholic, but was of the Muslim faith. I told him that St. Joseph and Our Blessed Mother were for all, and that the very first promise of protection of the St. Joseph prayer says, “Whosoever carries it…” It does not say, “Muslims not allowed…” So, he decided to carry it, and still has it on him these 10 years later. This was the reaction of so many of the other soldiers as well. Many told me that they would keep this prayer on them for the rest of their lives. Anyone, whom I personally knew to have carried this prayer into battle, ended up making it back home.

One other very important episode which took place, happened to my older sister. One day while at her work, an elderly woman was explaining to her that her grandson was in Iraq and in a very bad situation. The Grandmother said that she was praying very hard for him and asked my sister to pray also. My sister asked her to explain the situation her grandson was in. She said that he had written to her that his company was receiving very heavy casualty losses. His platoon especially, was losing 2-3 soldiers a week. My sister quickly advised her that she needed to send the prayer of St. Joseph to her Grandson. She then contacted me to obtain enough St. Joseph prayers for his entire platoon, and mailed them directly the next day. He wrote back to his Grandmother three months later saying that everyone in his platoon was now carrying the prayer of St. Joseph. Not only that, but since they had all started carrying it, they had stopped losing soldiers! He also finished the year in Iraq without another loss. Such is the power of prayer!

Now I always carry extra prayer cards in my back pocket along with the Miraculous Medals of Our Lady. I have them blessed by a good priest that I know, and I ask that he put three blessings on each of these items. The first blessing is for the soldiers going into physical combat. The second blessing is for the spiritual combat. The third blessing is for the conversion of sinners. I have seen so many miracles as a result of the reciting and carrying of this powerful prayer of St Joseph and the carrying of the Miraculous Medal of Our Lady. I pray that my testimony will be beneficial in helping others to discover this same devotion.