“A poor and humble servant” 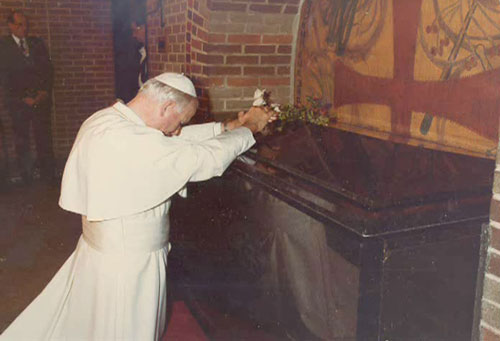 Pope John Paul II beatified Brother Andre Bessette, the great apostle of devotion to Saint Joseph, on May 23, 1982, and on that occasion, said the following in his homily:

We venerate in Blessed Brother Andre Bessette a man of prayer and a friend of the poor… a truly astonishing man.

The work of his whole life — his long life of 91 years — was that of "a poor and humble servant": Pauper servus et humilis, as was written on his tomb. A manual worker up to the age of twenty-five years, on a farm, in workshops and factories, he then entered the Brotherhood of the Holy Cross, who entrusted to him, for almost forty years, the work of porter in their college in Montreal; and finally for almost thirty years more he remained custodian of the Saint Joseph’s Oratory near the college.

Where, then, does his unheard-of radiance, his fame among millions of people, come from? A daily crowd of sick, afflicted, poor of all kinds and those who were handicapped or wounded by life found in his presence, in the parlour of the college, at the oratory, a welcoming ear, comfort and faith in God, confidence in the intercession of Saint Joseph, in short, the way of prayer and the sacraments, and with the hope and often manifest relief of body and soul. Do not the poor today have as much need of such love, of such hope, of such an education in prayer?

But what was it that gave Brother Andre this ability? God was pleased to give an attraction and a marvellous power to this simple man, who had himself known the misery of being an orphan with twelve brothers and sisters, left without money or education, with mediocre health, in short, deprived of everything except a great faith in God. It is not surprising that he felt himself close to the life of Saint Joseph, the poor and exiled worker, so close to the Saviour, whom Canada and especially the Community of the Holy Cross have always greatly honoured. Brother Andre had to put up with incomprehension and mockery because of the success of his apostolate. But he remained simple and jovial. Turning to Saint Joseph, in the presence of the Blessed Sacrament, he himself recited, long and ardently, in the name of the sick, the prayer that he taught them. Is not his faith in the power of prayer one of the most precious signs for the men and women of our time, who are tempted to resolve their problems without recourse to God?