A Miracle of the Holy Eucharist

Written by Anne Marie Jacques on Saturday, 01 May 2021. Posted in Eucharist

"Upon the Altar there takes place the transubstantiation of bread and wine into the Body and Blood of Jesus Christ.

That Body which the Virgin begot, which hung upon the Cross and was placed in the sepulcher, which rose again the third day, and ascended to the right hand of the Father, this Body the Church today and everyday presents and distributes to her faithful. When the priest speaks the words: This is My Body, the essence of the bread is changed into the Body of Christ." 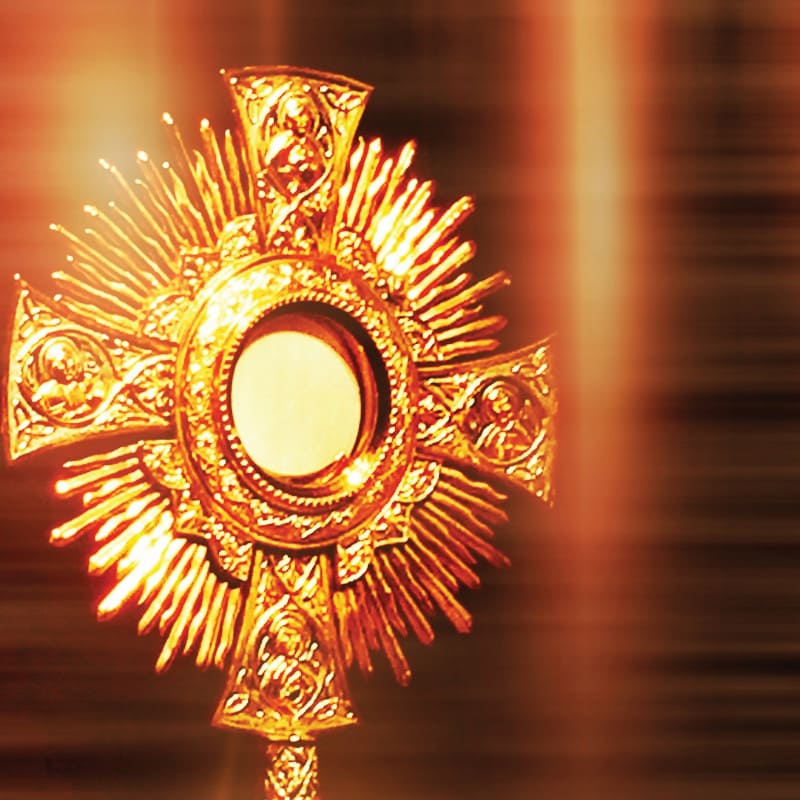 There is a beautiful painting of St. Anthony of Padua which hangs in our parish church, Our Lady of Czestochowa, in Turners Falls, Massachusetts that I have always loved. The image tells the story of one of many miracles which happened during the saint's lifetime. Then, as today, St. Anthony was known as "the Miracle Worker" because God worked many miracles through him. He was a gifted preacher and became known as the "Hammer of Heretics" because of his strong defense of Church teaching, especially the teaching on the virginity of the Blessed Virgin Mary and the True Presence of Christ in the Sacrament of the Holy Eucharist.

St. Anthony, whose feast day is June 13th, was born into a wealthy family in Lisbon, Portugal, in 1195. Given the name Fernando Martins de Bulhõese at his baptism, he was raised in the Catholic faith. At the age of 15, he entered the religious order of St. Augustine. He was sent to Coimbra for intense study in Augustinian theology and was ordained a priest. After ten years he made the decision to become a Franciscan friar under St. Francis of Assisi. Upon receiving permission to leave the Abbey, Fernando joined the new Franciscan Order, changing his name to Anthony.

Very soon he became renowned for his preaching and was admired for his simple yet profound teaching of the faith, which did much to reform the lax morals and combat the heresies of his time. Anthony spent the last ten years of his life traveling and preaching throughout northern Italy and southern France and died at the age of 36. He was canonized a saint of the Catholic Church by Pope Gregory IX less than one year after his death. 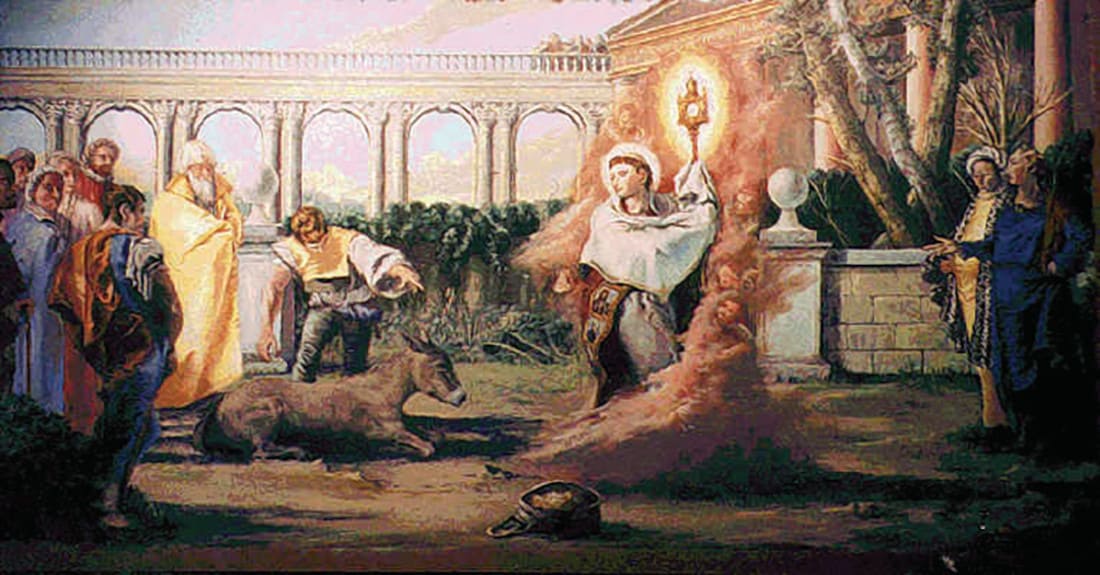 Painting which hangs in our parish church depicting St. Anthony and the miracle of the donkey and the Holy Eucharist

The miracle depicted in the painting took place in the year 1227, in the region of Rimini, Italy, and is perhaps the most important of all St. Anthony's miracles. There resided in that town a hardened heretic named Bonovillo. He vehemently rejected all teachings of the Church and blasphemed especially against the teaching on the True Presence of Christ in the Sacrament of the Holy Eucharist. He took great pleasure in mocking believers and had frequently argued with Anthony regarding this teaching.

It was on one such occasion that Bonovillo, having once more ridiculed those who believe in the True Presence, felt compelled to say to the saint, "If you can convince me that your God is truly present in that piece of bread, then I will believe in the truth of the Sacrament and convert to the Catholic faith."

So, it was with continued patience and gentleness that the saint explained the doctrine of Jesus' True Presence in the Sacrament. He explained that it was at the Consecration during Holy Mass, when the priest raises the bread and wine and pronounces the words of Christ that they become Christ's Body and Blood. He further explained that the change is immediate, complete, and irreversible and that it is accomplished by God's power. All these things Anthony explained to Bonovillo, telling him that it is truly Jesus whom we receive in Holy Communion, and because this is HIM, we also worship Him in this Blessed Sacrament both during and outside of Mass in Eucharistic exposition and adoration.

St. Anthony's skill as a preacher and his knowledge of the faith were compelling, but Bonovillo was a very hard headed man. He was as stubborn as the mule that often accompanied him and he remained unmoved, refusing to admit to any belief. Finally Anthony decided that it was time to offer Bonovillo a unique challenge. Pointing to the mule at Bonovillo's side, Anthony said "If this animal were to bow down in adoration before the True Body of Christ hidden under the appearance of bread in the Sacrament of the Holy Eucharist, would that be enough for you to believe?" Bonovillo smiled and replied, "Yes, of course! But only with these conditions: that my mule be locked up for three days without any food so that he may feel the torments of hunger. On the third day I will bring him out to the public square. I will have some oats ready for him and you may bring him your "Bread". Should he choose to eat your "Bread" instead of my oats, then, and only then, will I believe." St. Anthony accepted these conditions.

It was all arranged and after three days Bonovillo brought his hungry mule into the town so that everyone might witness what would take place. He had placed a large pile of oats at the center of the public square and held tight to the reins of the impatient animal as he waited for the saint to appear. At that moment, St. Anthony emerged from the nearby church carrying the Host in a golden monstrance held above his head. Looking toward the mule he said in a voice audible to all, "In virtue and in the name of your Creator, who I, as unworthy as I am, hold in my hands, I tell and order you: come forward immediately and render homage to the Lord with all due respect so that heretics and evildoers will understand that all creatures must humble themselves before their Creator  whom priests hold in their hands at the altar."

Bonovillo released the hungry animal and, to everyone's amazement, it immediately made its way toward St. Anthony holding the Blessed Sacrament! The mule then, with docility, bent its front legs before the Host held by the priest and remained there for some moments as if in reverent adoration. Bonovillo, seeing the attitude of this mere creature before the Creator of the world fell to his knees before the Holy Eucharist and, true to his word, humbly beseeched St. Anthony to forgive him and to accept him into the Holy Catholic Church. From that day forward he became a zealous follower and aid to St. Anthony in his mission among the people.

Today we need Christ more than ever. We need to be nourished by His Body and Blood. Churches have been closed for many long months due to governments' response to a virus (and in some places the churches still remain closed), and, though we were able to worship via television and internet, many of us became too comfortable participating in Holy Mass from the comfort of our homes. We cannot rationalize that it is the same experience and believe that we do not need to go to our actual churches. There are, of course, some who are vulnerable but for those who are capable of returning to the Holy Mass, it is very important that you return! Jesus is waiting for you there. We cannot live without nourishing our souls — no more than we could live by nourishing our bodies by watching food being consumed on a television screen. Jesus is present — Body, Blood, Soul & Divinity — in the tabernacles of our churches — in the Blessed Sacrament. He is there waiting for us.

Jesus said: "I am the living bread which came down from heaven; if any one eats of this bread, he will live forever; and the bread which I shall give for the life of the world is my flesh" (John 6:51). Theologians refer to this verse as the Bread of Life Discourse. If we read this verse in its context, we can see that the people are asking Jesus what sign he would perform for them — they want to know and be sure that He has come from God, and they cite the manna, the miraculous bread from heaven that sustained the Israelites as they traveled to the Promised Land after their exodus from Egypt (Exodus 16:1-36). In response, Jesus explained that the manna was a foreshadowing of the "true bread from heaven" that God would later give his people (John 6:32), and explained that He Himself is the "bread which came down from heaven" (John 6:41- 51). He made it clear that it is His flesh (and Blood) that is the new manna, the "true bread from heaven" intended to sustain us as we journey to our heavenly homeland.

Therefore, in the words of St. Cyril of Jerusalem, "Do not see in the Bread and Wine merely natural elements, because the Lord has expressly said that they are His Body and His Blood. Faith assures you of this, though your senses suggest otherwise."