2014: 800th Anniversary of the Virgin Mary giving the Rosary to St. Dominic 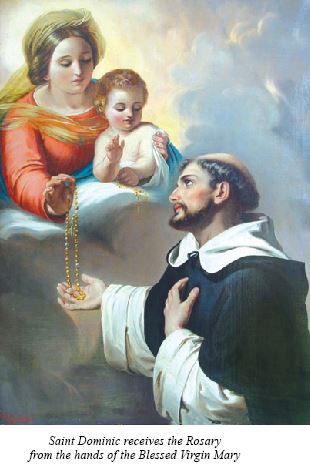 All recent popes, from Leo XIII to Pope Francis, highly recommend to the faithful the recitation of the Rosary for peace and the protection of Heaven upon families. But what is the Rosary? Saint Louis de Montfort wrote in his book, The Secret of the Rosary:

“The Rosary is made up of two things: mental prayer and vocal prayer. In the Holy Rosary mental prayer is none other than meditation of the chief mysteries of the life, death and glory of Jesus Christ and of His Blessed Mother. Vocal prayer consists in saying fifteen decades of the Hail Mary, each decade headed by an Our Father, while at the same time meditating on and contemplating the fifteen principal virtues which Jesus and Mary practised in the fifteen mysteries of the Holy Rosary.

“In the first five decades we must honor the five Joyous Mysteries and meditate on them; in the second five decades the Sorrowful Mysteries and in the third group of five, the Glorious Mysteries. So the Rosary is a blessed blending of mental and vocal prayer by which we honor and learn to imitate the mysteries and virtues of the life, death, passion and glory of Jesus and Mary. (Note: In his apostolic letter “Rosarium Virginis Mariae” on the Rosary in October, 2002, St. Pope John Paul II added a fourth series of five mysteries, called the Luminous Mysteries, on the public life of Our Lord.)

St. Louis de Montfort continues: “Since the Holy Rosary is composed, principally and in substance, of the Prayer of Christ and the Angelic Salutation, that is, the Our Father and the Hail Mary, it was without doubt the first prayer and the first devotion of the faithful and has been in use all through the centuries from the time of the Apostles and disciples down to the present.”

On the same topic, St. Pope John Paul II wrote, in the same apostolic letter on the Rosary mentioned above: “The Rosary, though clearly Marian in character, is at heart a Christocentric prayer. In the sobriety of its elements, it has all the depth of the Gospel message in its entirety, of which it can be said to be a compendium. It is an echo of the prayer of Mary, her perennial Magnificat for the work of the redemptive Incarnation which began in her virginal womb. With the Rosary, the Christian people sits at the school of Mary and is led to contemplate the beauty on the face of Christ and to experience the depths of his love. Through the Rosary the faithful receive abundant grace, as though from the very hands of the Mother of the Redeemer.”

What is the origin of the Rosary, when was it created? St. Louis de Montfort, , in the same book mentioned above, explains the story, which has been also confirmed by several papal documents:

“It was only in the year 1214, however, that Holy Mother Church received the Rosary in its present form and according to the method we use today. It was given to the Church by Saint Dominic who had received it from the Blessed Virgin as a powerful means of converting the Albigensians and other sinners.

“I will tell you the story of how he received it, which is found in the very well-known book De Dignitate Psalterii by Blessed Alan de la Roche. Saint Dominic, seeing that the gravity of people’s sins was hindering the conversion of the Albigensians, withdrew into a forest near Toulouse where he prayed unceasingly for three days and three nights...

The Psalter of Our Lady

“At this point Our Lady appeared to him, accompanied by three angels, and she said: ‘Dear Dominic, do you know which weapon the Blessed Trinity wants to use to reform the world?’ ‘Oh, my Lady,’ answered Saint Dominic, ‘you know far better than I do because next to your Son Jesus Christ you have always been the chief instrument of our salvation.’

“Then Our Lady replied: ‘I want you to know that, in this kind of warfare, the battering ram has always been the Angelic Psalter which is the foundation stone of the New Testament. Therefore if you want to reach these hardened souls and win them over to God, preach my Psalter. (Rosary)’

So he arose comforted, and burning with zeal for the conversion of the people in that district, he made straight for the Cathedral. At once unseen angels rang the bells to gather the people together and Saint Dominic began to preach.

At the very beginning of his sermon an appalling storm broke out, the earth shook, the sun was darkened, and there was so much thunder and lightning that all were very much afraid. Even greater was their fear when looking at a picture of Our Lady exposed in a prominent place they saw her raise her arms to heaven three times to call down God’s vengeance upon them if they failed to be converted, to amend their lives, and seek the protection of the Holy Mother of God.

“God wished, by means of these supernatural phenomena, to spread the new devotion of the Holy Rosary and to make it more widely known. At last, at the prayer of Saint Dominic, the storm came to an end, and he went on preaching. So fervently and compellingly did he explain the importance and value of the Holy Rosary that almost all the people of Toulouse embraced it and renounced their false beliefs. In a very short time a great improvement was seen in the town; people began leading Christian lives and gave up their former bad habits.

“This miraculous way in which the devotion to the Holy Rosary was established is something of a parallel to the way in which Almighty God gave His law to the world on Mount Sinai and obviously proves its value and importance.

“Inspired by the Holy Ghost, instructed by the Blessed Virgin and as well by his own experience, Saint Dominic preached the Holy Rosary for the rest of his life. He preached it by his example as well as by his sermons, in cities and in country places, to people of high station and low, before scholars and the uneducated, to Catholics and to heretics.

“All things, even the holiest, are subject to change, especially when they are dependent on man’s free will. It is hardly to be wondered at, then, that the Confraternity of the Holy Rosary only retained its first fervor for one century after it was instituted by Saint Dominic. After this, it was like a thing buried and forgotten.

“Later on (around 1460), when these trials were over, thanks to the mercy of God, Our Lady told Blessed Alan to revive the ancient Confraternity of the Most Holy Rosary. Blessed Alan was one of the Dominican Fathers from the monastery at Dinan, in Brittany. He was an eminent theologian and was famous for his sermons. Our Lady chose him because, since the Confraternity had originally been started in this province, it was most fitting that a Dominican from the very same province, should have the honor of reestablishing it.”

A prayer for peace and for families

In his apostolic letter on the Rosary, St. John Paul II wrote (n. 39): “The Church has always attributed particular efficacy to this prayer, entrusting to the Rosary, to its choral recitation and to its constant practice, the most difficult problems. At times when Christianity itself seemed under threat, its deliverance was attributed to the power of this prayer, and Our Lady of the Rosary was acclaimed as the one whose intercession brought salvation. Today I willingly entrust to the power of this prayer – as I mentioned at the beginning – the cause of peace in the world and the cause of the family.

A little further in the same document (n. 41), the Holy Father wrote: “As a prayer for peace, the Rosary is also, and always has been, a prayer of and for the family. At one time this prayer was particularly dear to Christian families, and it certainly brought them closer together. It is important not to lose this precious inheritance. We need to return to the practice of family prayer and prayer for families, continuing to use the Rosary.

“The family that prays together stays together. The Holy Rosary, by age-old tradition, has shown itself particularly effective as a prayer which brings the family together... Many of the problems facing contemporary families, especially in economically developed societies, result from their increasing difficulty in communicating. Families seldom manage to come together, and the rare occasions when they do are often taken up with watching television. To return to the recitation of the family Rosary means filling daily life with very different images, images of the mystery of salvation: the image of the Redeemer, the image of his most Blessed Mother. The family that recites the Rosary together reproduces something of the atmosphere of the household of Nazareth: its members place Jesus at the centre, they share his joys and sorrows, they place their needs and their plans in his hands, they draw from him the hope and the strength to go on.”

And St. John Paul II concluded his letter with these words: “I look to all of you, brothers and sisters of every state of life; to you, Christian families; to you, the sick and elderly; and to you, young people: confidently take up the Rosary once again. Rediscover the Rosary in the light of Scripture, in harmony with the Liturgy, and in the context of your daily lives.

“May this appeal of mine not go unheard! At the start of the twenty-fifth year of my Pontificate (October 16, 2002), I entrust this Apostolic Letter to the loving hands of the Virgin Mary, prostrating myself in spirit before her image in the splendid Shrine built for her (in Pompeii, Italy) by Blessed Bartolo Longo, the apostle of the Rosary. I willingly make my own the touching words with which he concluded his well-known Supplication to the Queen of the Holy Rosary:

“O Blessed Rosary of Mary, sweet chain which unites us to God, bond of love which unites us to the angels, tower of salvation against the assaults of Hell, safe port in our universal shipwreck, we will never abandon you. You will be our comfort in the hour of death: yours our final kiss as life ebbs away. And the last word from our lips will be your sweet name, O Queen of the Rosary of Pompei, O dearest Mother, O Refuge of Sinners, O Sovereign Consoler of the Afflicted. May you be everywhere blessed, today and always, on earth and in heaven”.