In the October/November/December 2020 issue of MICHAEL we published an article entitled: What Happened that Winter at Valley Forge? It was an account of General George Washington’s vision of “a beautiful lady”, who revealed to him her love and intercession for the United States of America. Amidst the strange and disturbing events that have dominated this past year it may well benefit us to be reminded of the deep faith and religious beliefs that influenced the first president and “father of our country”. 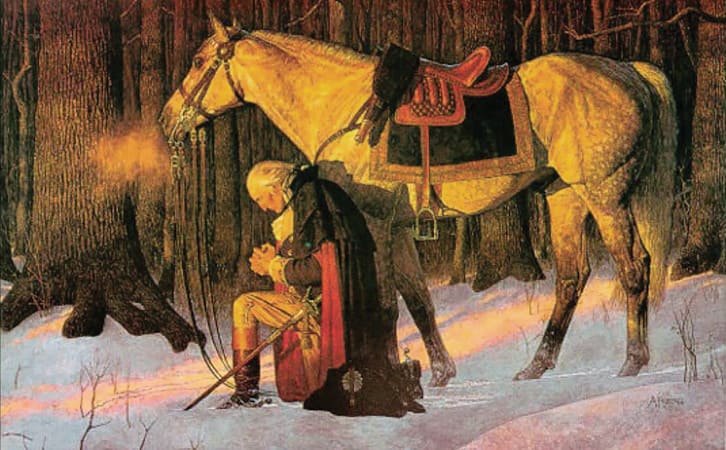 Most Americans know of George Washington’s great skills as a leader who guided our fledgling nation through the French and Indian Wars, up to the dark days at Valley Forge, and later becoming the first President of the United States of America. But what many do not know is that George Washington was a deeply spiritual man, who trusted unfalteringly in God, whom he referred to as Kind Providence.

As a boy of thirteen George Washington transcribed in his school workbook The Rules of Civility and Decent Behavior in Company and Conversation (which can be found in the Library of Congress.) The Rules of Civility were a code of civil, social and cultural behavior for respectable gentlemen of the day. Washington learned these rules by heart and applied them throughout his life.

The history of this code dates back to the 1590’s. French Jesuit priests distilled the spiritual exercises of their Spanish founder, St. Ignatius of Loyola, and incorporated them with rules of deportment for European nobility known as 110 Rules for Young Gentlemen. Adherents were reminded that man is God’s servant on earth and to honor his fellow man as he would like to be honored in everyday life, living not for self but for the good of all.

This narrative is, by no means, meant to be a “canonization” of our first president, nor is it meant to say that everything that has happened in the history of this nation has been good and holy. But many modern historians would have us forget the deep religious faith, prayer life, commitment and willingness to bend under the yoke of Divine Providence that was our first president’s character and which strongly influenced his own personal discipline. He faced every hardship and misfortune with a courage that overcame unimaginable obstacles, causing him to be esteemed and held in the highest regard by his fellow countrymen.

When my children were younger we would read daily from the lives of the saints. One story in particular stands out in my mind: Saint Katherine Drexel: Friend of the Oppressed. The author of this historical novel, Elizabeth Tarry, relates that as a child, St. Katherine (1858-1955) had many heroes, including General George Washington. Before going to sleep at night she would often whisper a prayer for him saying, “Let perpetual light shine upon George Washington. May his soul rest in peace.” This was a practice that she continued for the rest of her life, especially after she selflessly surrendered her own life and personal fortune to God to care for the poor.

On the occasion of Washington’s death, in a circular letter to his clergy, Archbishop John Carroll first Catholic Bishop in America, and close friend to the General wrote:

“Roman Catholics, in common with our fellow-citizens of the United States, have to deplore the irreparable loss our country has sustained by the death of that great man who contributed so essentially to the establishment and preservation of its peace and prosperity. We are, therefore, called upon by every consideration of respect to his memory and gratitude for his services to bear a public testimony of our high sense of his worth when living and our sincere sorrow for being deprived of that protection which the United States derived from his wisdom, his experience, his reputation, and the authority of his name…”

In the archives at Georgetown University in Washington, D.C., is a handed-down account of the “sacramental” death of George Washington:

“It is widely circulated that Washington, or perhaps those around him, sent for his Minister to join him in his preparations to meet his Maker. The Minister was nowhere to be found on such a short notice. In the mysterious aegis of Divine Providence the only clergyman available, so the oral history that circulates to this day holds, was Reverend Francis Neal, a Jesuit priest from the Society of Jesus in Maryland Province. George Washington, forever the man of destiny, is said to have accepted his fate peacefully. The immortal Founding Father of the United States, great grandson of a persecuted Anglican-Catholic priest, so some say, humbly confessed his sins, received the Blessed Sacrament and final anointing with Holy Oil.”

Interestingly, Rev. Francis Ignatius Neal was an esteemed and long-time friend of General Washington. In 1795, Washington contributed a sum of money (equivalent to $1200.00 US today) for the creation of a Catholic parish in what is now Alexandria, Virginia. A portion of land was purchased at the south end of the city on what is today Church and South Washington Streets. A brick structure, the church of Saint Mary, was built under the guidance of Reverend Francis Ignatius Neale, S.J. The church was later rebuilt in another part of the city and renamed the Basilica of Saint Mary. The original plot became a cemetery for Saint Mary’s and the first Catholic cemetery in Virginia.

On October 22, 1936, while on a tour of the eastern United States, Eugenio Cardinal Pacelli, who later became Pope Pius XII, visited Mount Vernon and viewed a beautiful painting of the Blessed Virgin Mary, which to this day hangs in the large dining room of the Washingtons’ home. He then placed a wreath on the graves of George and Martha Washington. Later during his pontificate he wrote of the President in an encyclical entitled, Sertum Laetitiae, in 1939:

“When Pope Pius VI gave you your first Bishop in the person of the American John Carroll and set him over the See of Baltimore, small and of slight importance was the Catholic population of your land. At that time, too, the condition of the United States was so perilous that its structure and its very political unity were threatened by grave crisis. Because of the long and exhausting war the public treasury was burdened with debt, industry languished and the citizenry wearied by misfortunes was split into contending parties. This ruinous and critical state of affairs was put aright by the celebrated George Washington, famed for his courage and keen intelligence. He was a close friend of the Bishop of Baltimore. Thus the Father of his country, and the pioneer pastor of the Church in that land so dear to us, bound together by the ties of friendship and clasping, so to speak, each the other’s hand, form a picture for their descendants; a lesson to all future generations, and a proof that reverence for the Faith of Christ is a holy and established principle of the American people, seeing that it is the foundation of morality and decency, consequently the source of prosperity and progress.”

Did George Washington die a Roman Catholic? This we do not know for certain. The point of this narrative is not to prove that as fact. What IS important is the recognition that the Faith of our Founding Father and his religious convictions are what guided him in his public life and his philosophy of governance. This is where we need to take heed, for it is truly in the measure that we recognize God’s goodness and obey His Commandments, that we will continue as a nation to receive His blessings.

As we proceed through 2021, may we as a nation recall the tremendous virtues of our first president, and all those episodes in his lifetime which point to his deep conviction that God, in His Kind Providence, watches over the United States of America. George Washington often reminded us that Divine gifts are reciprocal. In his Thanksgiving Proclamation, October 3, 1789, he said:

“…[I]t is the duty of all Nations to acknowledge the Providence of Almighty God, to obey His will, to be grateful for His benefits, and humbly to implore His protection and favor.”

Many of the quotes and accounts in this article were taken from the book: The Spiritual Journey of George Washington, by Janice T. Connell, Hatherleigh Press, NY, 2007

I now make it my earnest prayer,

that God would have

in his holy protection,

that he would incline the hearts

to cultivate a spirit of subordination

and obedience to Government,

to entertain a brotherly affection

and love for one another,

for their fellow citizens

of the United States at large,

and particularly for their brethren

who have served in the Field,

and finally, that he

be pleased to dispose us all,

to do Justice, to love mercy,

and to demean ourselves

with that Charity, humility

and pacific temper of mind,

which were the Characteristics

of the Divine Author

of our blessed Religion,

and without an humble imitation

of whose example in these things,

we can never hope

to be a happy Nation. Amen

Prayer adapted from Washington’s Circular Letter to the States, which he wrote on June 8, 1783, as the Commander in Chief,

at his headquarters in Newburgh, New York. This circular was directed to the governors and states of the new nation. His reference to them has been replaced by the words “the United States.” Otherwise, the words are those of General George Washington of the Continental Army.