Young Pilgrims around the world 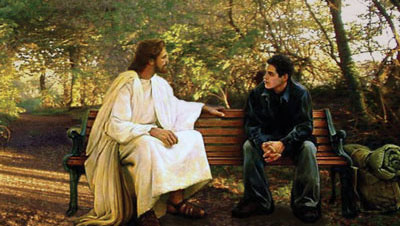 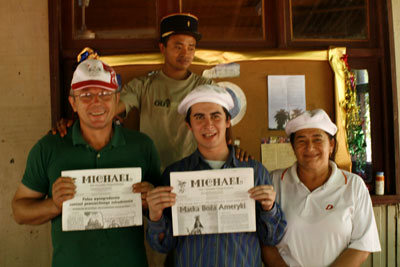 Gustavo left us for his home in Paraguay with the firm intention of continuing the work of social justice in his country. Paraguay, like all South American countries, is in extreme poverty and the economic crisis is affecting them seriously. The solution of Social Credit is urgently necessary, and for those who are fortunate enough to have the knowledge of this great light; it is more than ever an important task to transmit it to others.

He began his apostolate within a week of his return, going out with his mother and sister to visit the families and pray with them. Gustavo’s family are very happy and proud that their son has decided to give his youth and energy to help those who are in need. During their day of apostolate, they met a Polish priest who has been living in Paraguay as a missionary for the last 15 years. He agreed to support the Pilgrims, and took leaflets in Spanish and Polish.

More recently, on Tuesday January 6th, he went out to do the apostolate again with several of his compatriots, (including several who stayed with us in Rougemont last year), they were very happy to accompany him in visiting and praying the Rosary with the families. Here is some excerpts of his report:

"We decided to go to the city of Hernandarias, which receives the Pilgrims of St. Michael for the first time. Our first objective was to go to the parish of Our Lady of the Assumption, to see Fr. Ivo Rodolfo Ramirez, a Franciscan priest, and we explained to him our movement. He has a lot of admiration for our work for social justice and he gave us the permission and blessing to do our apostolate in the area of his parish. After this, we divided our group in two: Mabel, Jorge and Evelio (a new volunteer in our movement) formed one group and Gustavo and Miguel the other. We visited the families on the door to door, teaching them about our movement, spreading the leaflets, rosaries, holy pictures, speaking about Social Credit and in all the homes the people edified us with their hospitality, generosity, fervor, and amiability. Miguel and Gustavo took a subscription in one of the homes where they were invited to eat and they were able to explain to them more about our work and our experience with the Pilgrims of St. Michael from around the world.

Another group invited us to eat with them that runs a food kitchen called "St. Francis of Assisi." Afterwards, we gave a presentation of our work to the people who were present at the food kitchen. We also distributed leaflets in the centre of the city, and we met another lady there who said the Rosary with us. And that was the end of our day of apostolate in Hernandarias."

Gustavo has many plans for apostolate in his country, and hopes to return to Canada for the "Siege of Jericho" in March. 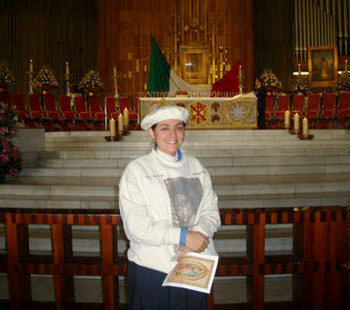 Fatima left Canada for Mexico on December 7th after spending a year with us at our headquarters. She distributes leaflets in her home town of Puebla, usually in parks where there are many people who circulate. She distributes leaflets in cities (that are inside of Puelba state) such as: the center of Puebla, south of Puebla and Atlixco. She also met with Fr. Eugenio Lira Rugarcia, who is the secretary of communication in the Archdiocese, he has many contacts available. Fatima intends to organize with other groups in her area to help spead leaflets quicker and further afield.

On the feast of Our Lady of Guadalupe in Mexico City, she was joined by Mr. Mrs. Xavier-Gutierrez, who helped her in passing out leaflets to the many pilgrims who go each year to honor Our Lady on this great feast day.

She said, "Really, there are so many people who come for the feast of Our Lady. I had prepared some leaflets for distribution, and the people were very happy to take them. We hope to have even more distributors in the near future to help with the work in Mexico."

Fatima intends to travel in January to South America, where she will continue her apostolate in Columbia and Ecuador. In Columbia, there is a local coupon group started, and Fatima wants to study and learn how they function, as well as do the apostolate with members of "San Miguel" in Columbia. After her tour there, she will return to Rougemont for the "Siege of Jericho."

This past autumn I went to do apostolate work in France at the invitation of Mr. Christian Burgaud, for a period of two months. I left Montreal on October 7th, the "Feast of the Rosary," it was my baptism in the air as it was my first flight.

I arrived the morning after; tired because I had not been able to sleep on the plane. At the airport in Nantes, Mr. Burgaud was waiting patiently, when we arrived at his place I took the opportunity to sleep a little. The next day we started our apostolate going towards the South all the way up to the border of Spain. We visited many families, they were happy to see a young person doing apostolate with Mr. Burgaud. They had a bit of difficulty with my accent, but after a month we understood each other quite well.

The people who sheltered us were very hospitable, these were homes that Our Lord is loved and honoured. I would like to thank all of those families who took us into their homes and all those who helped us in our apostolate.

I had the grace of going to visit Lourdes with Mr. Burgaud in order to make the "Way of the Jubilee" that is in four steps: at the parish Church where the baptismal font that was used for the baptism of St. Bernadette is located, the "cachot" where the Soubirous family lived, the door of St. Michael, the arcades and the grotto, and finally the hospital where St. Bernadette made her First Communion on June 3rd, 1858. During the evening we participated in the candlelight procession, that was instituted by Father Marie-Antoine (we also visited his tomb in Toulouse).

The next morning the Mass was celebrated at the grotto by a Polish priest, I did not understand anything but the important part was to receive Jesus in the Eucharist. After the Mass we waited three and a half hours in line in order to have the purification of soul and body in the miraculous water in the baths of Lourdes. I really loved the sanctuary of Lourdes, the volunteers do a remarkable job, I sensed the fraternity and the charity of the people. Pilgrims from around the world go to pray, others go to thank the Blessed Virgin for a favour obtained; it was a beautiful experience for me. I thank God for the graces that He gave to me during my pilgrimage at the sanctuary of Lourdes.

As we passed through Normandy, Mr. Burgaud decided to go to see our great Patron, St. Michael, at Mount St. Michael to thank him for his protection that he has given us since the foundation of the movement. The Abbey is also called "The Wonderful," and celebrated 13 centuries of foundation. Providentially as we went up the mountain we arrived at the Chapel of St. Peter in time to assist at the Holy Mass that was being celebrated, in memory of those who died on the Armistice of November 11th.

My trip to France was a very enriching experience because we went to announce the light of Social Credit with personal meetings in the families, and this really helps them to get to know us better. I would also like to thank Mr. Burgaud and his family for lodging me, and for the good company and example that he gave to me during this unforgettable tour in France.