“We Came, We Saw and We Believed”

by Bishop Fridolin Ambongo of the Democratic Republic of the Congo 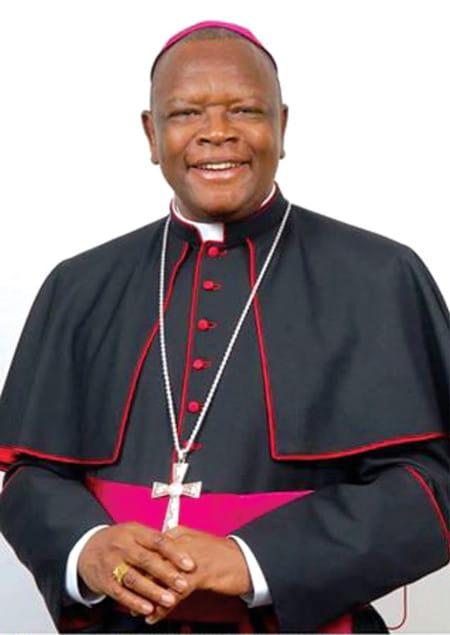 Archbishop Ambongo will replace Cardinal Monsengwo at a critical time in DRC history. The country’s President, Joseph Kabila, was to have ceded his position in 2016, according to the DRC’s constitution, but refused to do so. Both Cardinal Monsengwo before him and Archbishop Ambongo had pleaded that the country’s constitution be followed and that citizen’s rights be respected.

We congratulate the Archbishop for his nomination to his new role within the Catholic Church of the DRC. We had the pleasure of his company and enjoyed his profound faith and intelligence at the Louis Even Institute for Social Justice in Rougemont, Canada when he and six other Bishops from Africa joined us in August, 2010, for our annual Study Session on Social Credit. He described Social Credit as a “wonderful discovery”. We have included excerpts from his comments following the week of Study.

“We came, we saw, and as the other Bishops have said, we believed. I can summarize my experience here [at the Study Session] as a truly marvelous discovery based on four factors. First, I saw that the Social Doctrine of the Church has application to today’s scandalous financial system. I had previous knowledge of the Church’s Social Doctrine as I had taught it at Kinshasa’s Catholic University in the DRC for nine years before being named Bishop.

“Although I had some knowledge of the Social Doctrine, I found our brilliant teacher, Alain Pilote, applied it for us to a real problem in a simple and comprehensive way. He explained complex matters in plain terms and always peppered his analysis with humour.

“Some of our group [of seven Bishops from Africa] had read Social Credit material before our arrival in Canada, but I had not. I only heard about Social Credit after my arrival. The Social Credit proposals explained in 10 lessons, prepared by Alain Pilote awakened me. Voila! I thought. Things began to make sense and I started to find my way through a maze. Meeting people at the Study Session from areas of Canada and the United States, and discussing world affairs, was my third “marvelous discovery”.

A System that Demeans Us

“People who live in the southern hemisphere of the world are of the opinion that North America is, as the Iranians would say, the “great satan”. We believe that our burdensome and demeaning economic and financial problems are the fault of Americans. Since Americans seem to benefit from this system, we have believed that they support and sustain it.

“What a great discovery that Americans and Canadians I met distanced themselves from the satanic and murderous financial system, and made critical and coherent arguments against it! Although the system appears to work in North America, there are victims everywhere. Although the pressures experienced in developed and developing countries are different, they are fundamentally similar. After all, the same financiers are the cause of our collective problems.

A Solution to Indebtedness

“My greatest solace and relief, however, was in discovering that a solution exists to the perilous problem of the indebtedness of nations. We often experience ourselves as powerless and financiers as all powerful. We feel we have reached an impasse. After all, what can we do ? The Study Session opened our eyes. There is a solution. As our teacher said: “The answer dœs exist.” (The booklet by Louis Even, A Sound Financial System, contains the answer.) Regarding the application of Social Credit, we Bishops are not in a position where we may approve or disapprove. We are not specialists in international finance, after all. But of the Social Credit principles ? We approve of them wholeheartedly.”