A mission has been confided to me: to be an apostle for the Pilgrims of St. Michael

on Thursday, 01 October 2009. Posted in Testimonies

During our Congress on Sunday, Sept. 6th, Archbishop Marie-Daniel Dadiet repeated his appreciation and gratitude and let us know that he and Cardinal Agre are determined to make the Social Credit philosophy known in the Ivory Coast:

Before I give you my impressions on what I have just lived in this prestigious Congress of the Pilgrims of St. Michael, I would like to read to you a short excerpt from the encyclical "God is Love" (Deus Caritas Est) of Pope Benedict XVI: "The Church is the family of God in the world. In this family, no one ought to go without the necessities of life… The aim of a just social order is to guarantee to each person, according to the principle of subsidiarity, his share of the community’s goods."

I would like to, brothers and sisters and dear friends, express all of my gratitude to His Eminence Bernard Cardinal Agre, Archbishop Emeritus of Abidjan, who is a great friend of the Pilgrims of St. Michael. If I say thank you to the Cardinal, it is because he made me discover the Pilgrims of St. Michael, he made me discover Social Credit. And this gesture of our father Cardinal does not surprise me; I have known him since 1976 — I was a seminarian at that time and he was the bishop of Man, in the west of the Ivory Coast — but already in the Church of the Ivory Coast and also at the level of the universal Church, he had big responsibilities. He was in charge of the Episcopal Commission of the means of social communication in the Ivory Coast and in the Vatican as well… Every time the Cardinal wrote an article to the faithful or youth of the diocese of Man, I had a copy and like a son, I remain attached to my father. After that he went to Abidjan where he was Archbishop for sixteen years running, then he was nominated as Cardinal and I had the occasion to work beside him for four years before being appointed myself Auxiliary Bishop of Korhogo. I would like to take advantage of this occasion to renew to him all of my gratitude. 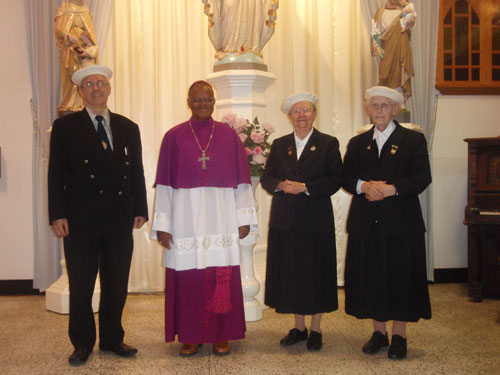 The Cardinal received me one day in his private home (in Abidjan) and that day, he gave me three books on Social Credit (In this Age of Plenty, the 10 Lessons, From Debt to Prosperity). And the Cardinal told me: "My son, take these three books and go; read them and afterwards come to see me and we will talk about them."

Back home in the Ivory Coast we have the habit of saying, "All that God does is good." Before this congress, I could not meet with the Cardinal so that we could speak about these three books. God wanted me to come to this congress so that I could see it with my own eyes, so that I could personally hear and on the return to Abidjan, we will sit and assess this congress, and see how to announce and diffuse social credit in the Ivory Coast. Thank you, Eminence, for this invitation.

My gratitude goes to the Direction of the Louis Even Institute of and its General-Directress, Therese Tardif, and also to the great family of the Pilgrims of St. Michael. I admire your patience and your courage, because for me it was not obvious that I would be at this Congress — I was too busy, I had too many activities. Miss Tardif and Mr. Lefebvre may remember that the airplane ticket was changed three times because there was an ordination of three bishops in the Ivory Coast (at the end of August) and out of the three new bishops, there was one who was in my ecclesiastical province and it is I who had to introduce him during the ceremony. I could not be absent. So we had to change the dates of my ticket. And before coming they said to me (I will not say the name of the person): "So you are going, but now we need you because there are files that need your attention… so how will we do this?" I said: "I gave my word; there is no question of saying that I will not go to the Congress (of the Pilgrims of St. Michael). I go to the Congress for the first time, let me rest, that’s all." Thank you to the Direction of the Pilgrims of St. Michael for this invitation.

Thank you for the way you have organized this Congress. Because, even as I was arriving I had some apprehensions: is this a congress where we will run, we will not rest or will wake up at five in the morning and leave at eleven in the evening — like it happens elsewhere. We will eat at impossible hours, or we will be late and there will be nothing to eat… You see. But I realized that the organizers had everything well-planned and as I find myself in this Congress, I am not stressed, I sleep well — and when we sleep well, we work well! So, Miss Directress, thank you for the perfect organization, for the great planning and each year if you invite me, I will come!

I would like to thank you not only for the invitation but also for the reception and sharing. Mr. Louis Even left a heritage and you are managing this heritage well, thanks to your faith, your intelligence, thanks to the love you have for God and for your neighbor. It is the first time that I see at a Congress; youth, adults, old people, aged people; it is the first time since I am a priest and bishop — I go often to Rome and Africa to take part in different congresses but it is rare to see adults and old people, it is rare to see young people and I understand this because if we must run all day, then we cannot invite adults and parents! But here, I find myself in a family where everyone is at ease, where each person feels at home. When we have a meal, one says to the other: "Here is your plate, go serve yourself." When we see an adult, we hurry to give him a place. We who are bishops, when we see the Cardinal, we are already hurrying: "Eminence, what can we bring you?" But this is family! When a family is solid, when a family is united, we no longer know who is the father, mother and grandchildren. Thank you for the spirit of family.

Yes, brothers and sisters, for one week we have studied social credit in the light of the social doctrine of the Church. There also, I would like to say thank you to the principal animator (Mr. Alain Pilote). I have studied the Compendium of the social doctrine of the Church, but from the way that this congress organizes things, I must admit that I learned much. Why? Because everything is so simple that there were no secrets, there was nothing complicated, there were no learned words in French, Latin or other languages… Everything was simple and when it is simple, we understand. So, thank you for that. In one week I learned a lot and now I only have to pass on what I have learned.

Eminence, Miss General-Directress of the Louis Even Institute, thank you for having invited and honored my person, because on this stage, I represent three institutions: I represent my diocese — I am the archbishop of a big diocese (Korhogo) in the north of the Ivory Coast. Within the Episcopal conference of the Ivory Coast, I am the vice-president (of this conference). And for the last eleven years I have been also the president of the Episcopal Commission of Justice and Peace. I will have to report, I will have to give the outcome (of this Congress) to my dioceses in Korhogo, once I have returned. At the Episcopal conference, there will be two voices: the voice of the father (Cardinal Agre) and the voice of the son (myself). When the father takes the floor, the son will support him. And if it’s the son who takes the floor, it will be the father who supports him. And be certain, Social Credit is already known in the Ivory Coast by the minority, in three years it will be known (by the majority) and for this, you must trust us.

Brothers and sisters, a mission has been confided to me at the finalization of this conference: to be a missionary and an apostle for the Pilgrims of St. Michael. Yes, if the Cardinal wanted me to come to this congress, it is because he knows what I am capable of. He did not invite me by chance… He knows that with his (spiritual) "grandson", my friend Fr. Patrice Savadogo, the chaplain of Justice and Peace and without forgetting the lay people from the Ivory Coast who came to this congress, he can rely on us so that social credit will become known in the Ivory Coast. But to conclude, we have a saying which states: "Let’s sleep on it." Once back in the Ivory Coast, around our father the Cardinal, we will sit down, reflect and associate with Justice and Peace and with our friends, so that we may create an organization that will allow us to make social credit known. Thank you for the invitation, thank you for everything and we will see you very soon!