The time for the economic liberation of Africa has come

Our annual Congress of Sept. 5-7, 2009, in Rougemont, was exceptional once again. We had representatives from 23 countries and distinguished guests from Africa: one cardinal, four archbishops and eight priests. They all pledged to make our Movement known in Africa and even all over the world.

The most distinguished guest was His Eminence Bernard Cardinal Agre, archbishop emeritus (retired) of Abidjan, Ivory Coast. Despite his age, (83) he is still very active in the Church and takes part in many activities, like the recent Synod of Bishops for Africa in Rome, Oct. 4-25. His Eminence came for the first time to Rougemont in June 2008, on the occasion of the International Eucharistic Congress in Quebec City and also attended a week of study on Social Credit (which has been published in a book called The Social Credit proposals explained in 10 lessons). He came back in September of the same year for our annual Congress and came for the third time this year in September, to attend our annual Congress once again, which was preceded by another week of study with the 10 lessons on Social Credit.

Since his first visit to Rougemont, Cardinal Agre has never missed an opportunity to make us known to other bishops, priests, and other people in high places. It is Cardinal Agre who asked us to invite the four archbishops who came and they all publicly thanked His Eminence for having brought them to Rougemont and making them discover the light of Social Credit. Here is what the cardinal said to us in Rougemont on Friday, September 4, at the conclusion of our week of study: 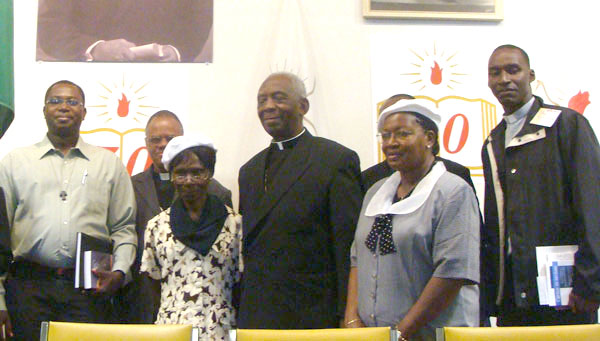 My dear friends, it is not the first time that I come here — it is even the third time — but it is always with great pleasure because here I discovered while listening to you and in seeing so many important people like ministers, bishops and archbishops; that hope is permitted, because it is not possible that we have had a rope around our neck for many years (the yoke of debt). The same scenerio is everywhere but, all of a sudden, someone (Louis Even) says: "I discovered a light (Social Credit)."

When we look at this light, after reading, seeing and hearing the experiences from all over — from Switzerland, Poland, Canada, the great island of Madagascar and many others — we start dreaming. And this dream is not a utopia! This dream is something that is concrete: we will come through!... I am happy to see young people; the young people will bring victory, that is certain!

When Mr. Marcel Lefebvre came to the Ivory Coast he stirred up enthusiasm; many people had read the 10 lessons (on Social Credit). It was the young people who spoke about it with most enthusiasm. I had at least thirty adults read this book (the 10 Lessons on social credit). One of these people was the President of the National Assembly of the Ivory Coast. He thanked me and told me: "We will have the occasion to speak about this in depth, because it is a tablet of hope!"

We should not become discouraged. Since I came here (to Rougemont) there have been many changes in the mentality and these revolutions will continue to happen, we will go very far. Here is what I had to tell you. Do not sit there and say: "Ah, it will never happen…" It is coming already! And at the end of the tunnel, at the very end, there is Someone standing, who is as luminous as on Mount Tabor: His name is Jesus Christ and thanks to Him, we will go with the Virgin Mary to the feast! 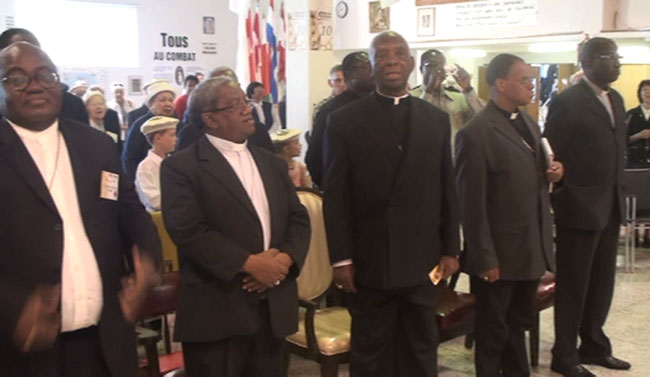 The five archbishops present at our Congress, from left to right: Archbishop Damião António Franklin, of Luanda, Angola, Archbishop Odon Marie Razanakolona, of Antananarivo, Madagascar; Bernard Cardinal Agre, archbishop emeritus of Abidjan, Ivory Coast; Archbishop Marie Daniel Dadiet, of Korhogo, Ivory Coast; Archbishop Vincent Coulibaly, of Conakry, Guinea. They all attended our week of study on Social Credit; four of them attended the Synod of Bishops of Africa in Rome, whereas Archbishop Dadiet spent one month in Rougemont after the Congress.

After the Congress, Cardinal Agre continued to spread our message. For example, here is what he said in Rome on October 9, at the Synod of Bishops for Africa:

Like any organized country, the young nations of Africa, South America, etc... had to call on international banks and other financial bodies to realize the many projects for their development. Very often we are not suspicious enough of our inept political leaders. They fell into the trap of those that the people in the know call "financial assassins" (economic hit men), the jackals sponsored by severed organisms in the market of subterfuge aimed at enriching international financial organizations deftly supported by their states or other instances drowned in the plot of silence and lies.

The staggering profits go to the financial assassins, to the multinationals, as well as to some powerful nationals who act as screens to the foreign negotiators. Thus the majority of nationals continue to drown in poverty and the frustration it generates.

The "financial assassins," the bearers of plethoric financing, organize with their local partners so that the large sums lent with compound interest can never be reimbursed quickly or entirely. The contracts of execution and maintenance are regularly assigned, under the form of monopoly, to the lenders’ nationals. The beneficiary countries mortgage their natural resources. The inhabitants, from generation to generation, are locked in and kept prisoner for many long years.

To reimburse these threatening and inexhaustible debts, like the sword of Damocles over the heads of states, the "debt service" weighs heavily on the national budget, to the tune of 40 to 50% of the Gross National Product.

Thus tied up, the country has trouble breathing; it must tighten its belt to investments, the necessary costs for Education, Health, and general development.

This debt further becomes a political screen to not satisfy legitimate requests, with their parade of frustrations, social problems, etc... The national debt appears to be like a sickness programmed by specialists worthy of courts who judge crimes against humanity, evil conspiring to suppress entire populations. John Perkins (in his book Confessions of an Economic Hit Man) described what is behind international aid very well: that it is never effective in terms of lasting development. The key problem today is the lack of the desire, the will to abolish all slavery.

Upright generations, young boys and girls in certain developed countries and those in countries of the Third World, have become conscious that to change the world, its myths and fantasies, is a realistic and possible project. Some NGOs emerge to protect the material environment and defend the rights of oppressed peoples.

For the Church, light of the world, to play her prophetic role she should concretely commit herself in this fight with a view to finding the truth.

The experts have known for years that most of the debts have been effectively reimbursed. To purely and simply cancel them is no longer an act of charity but one of justice.

Thus today’s Synod should be able to take into consideration this problem of the cancellation of debts that weigh too heavily on the population.

For this not to be a merely sentimental whim, my proposition is that an international commission made up of experts of high finance, notified pastors, men and women of the North and South to take this dossier. This Commission would be entrusted with the triple mission:

Bernard Cardinal Agré, Archbishop of Abidjan, Ivory Coast, and member of the Pontifical Council for Justice and Peace: