The mission of the Pilgrims of St. Michael in South America

The second week of May, two Pilgrims of St. Michael began their first tour of apostolate in South America, of which the results were most positive. We visited the countries of Colombia and Argentina, guided by Our Blessed Mother of Chiquinquirá and Luján. We were able, with Her help, to sow the first seeds that will see the beginning of the battle of St. Michael and its fruits in this part of the world.

Since their colonization, and up to the 19th century, these two peoples always fought for their physical, social, and cultural freedom. At present, this struggle is more spiritual than ever. Actually, we can say it is completely spiritual, and we are aware that there is no man that can win this battle except Jesus, the same Man that 2,000 years ago incarnated Himself in the Virgin Mary's womb.

We were in Medellín on May 13th, the date in which we celebrate the Virgin's Apparitions in Fatima. We were in this place with the people that Mr. Pierre Marchildon, a full-time pilgrim with 30 years of intense apostolate, met before when he was for the first time in this country as a guest of Mr. Marino Restrepo.

We also met with Mr. Orlando López, the director of Abba Communications, who became an important ally, helping us in the distribution of our publication and in the organization of several meetings, as well as a radio-broadcasting interview with Rodrigo Jaramillo, who happens to be the leader of a big group of young Catholics, dedicated to prayer and evangelization. After talking with him about the social doctrine of the Church, he said: "Now, I am a Pilgrim of St. Michael also. What comes next?" Before going to Bogotá, he organized a meeting with more than 130 people, who were really enthusiastic with our apostolate and who committed themselves to go and distribute our publications. We were able to distribute here more than 14,000 leaflets on the Year of the Rosary and the Eucharistic Encyclical.

We were also invited to the Broadcasting Station of the Universidad Bolivariana, where we gave an introduction on Social Credit and its consequences on the moral values in our present society. We kept on with other meetings in some parishes and different Catholic groups, like those lead by Father Víctor Márquez and Mrs. Libia Betancur, who were very happy to hear us talking about the teachings of the Catholic Church, the New Age, the social doctrine of the Church, etc. 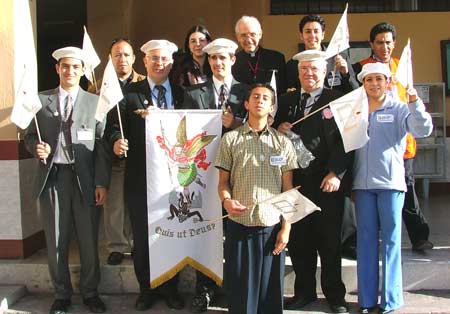 Our Pilgrims at a Congress of lay apostles in Quito, in July, 2004, with Bishop Julio Teran of Ibarra, Ecuador

In this city, where the love towards Our Blessed Mother is evident, we began working immediately with a group called The Pilgrims of Love, who, since their very first meeting with Mr. Pierre Marchildon, began to spread our leaflets and their message in the most important parishes in Zipaquirá, a region close to Colombia. Thanks to their work, we were able to continue delivering our publications and holding meetings, mainly with young people who decided to begin working with us right away in order to fight for justice.

We also attended the most important sanctuary in Colombia, the Basilica of Our Lady of Chiquinquirá, where, with the permission of the priest in charge, we were able to distribute around 7,000 leaflets on the Year of the Rosary.

We were also able to have an appointment with Bishop Fernando Sabogal, from the Diocese of the Immaculate Conception, who gave us a letter allowing us to do our apostolate, saying that "everything having to do with the doctrine of the Catholic Church has to be supported."

We visited there other lay groups. One of them was the group lead by Felipe Gómez, a religious singer who has a large group of people that get together once a week to pray the Rosary. They also help different communities and teach catechism to children. He let us visit his groups in order to explain to them about Social Credit and to spread some leaflets among them. We also contacted Rafael Arango, the director of an assistance and health center, who also cares about the teaching of the Catholic Faith, prayer, and a permanent calling to live the Sacraments. As a former banker, he realizes the urgent importance of transforming the economic system. He and his peers were really interested in knowing more about the model that is being implemented in Madagascar, where the Pilgrims of St. Michael have already made an agreement with the local church in order to apply a project having to do with Social Credit.

Helidodro Prada, the owner of a Catholic bookstore, also was happy to help us, and he organized different meetings with the people that belong to his large groups of prayer, deciding to join their forces with ours in order to fight together for winning this decisive battle.

With not many names for beginning the apostolate there, we arrived into Buenos Aires, the capital of Argentina. The first one in receiving us was Our Lady of Luján, the patroness of Argentina — of which the blue and white flag represents the Virgin Mary's robe. It was to Her that we offered our mission asking, at the same time, to get for us the necessary people for going on with the apostolate. And there was no delay in Her answer. Quite soon, we were having meetings, thanks to Mr. and Mrs. Seligman and Mrs. Verónica Ogara. We had three different interviews on the Catholic Radio Broadcasters. We gave a lecture to a group of college students and another to a group that has been gathering since the Apparitions of Our Lady in Medjugorge.

We were able to speak with Father Roque Ravassio, who accepted to distribute more than 45,000 copies of the Year of the Rosary leaflet, after knowing that his own Bishop had already asked Rougemont for copies on the same topic. Then we continued on to Concordia, where we met, in the parish of Our Lady of Fátima, Father Ravassio, who then organized several meetings with his parishioners.

There were three Bishops that received us, one of them being Mons. Juan Suárez, from the parish of Gregorio Laferrere, the one who gave us a letter giving credit to our Catholic work that "focused on the search for justice." Another Bishop, Mons. Basioto, after the Sunday service, referred to the Pilgrims of Saint Michael as "very intense and rough fighters." Finally, the Auxiliary Bishop of Mercedes, after a long interview, asked for 20,000 copies of the document on the Rosary.

We were also able to dialogue with the directors of the Global Commerce Network and their well-known trade system. It was really encouraging to know that, in spite of all the inconveniences aroused while trying to implement their alternative system so as to help the people immersed in poverty to be able to, at least, survive, they continue working hard, and have launched again their program, despite all of the opposition they have experienced coming out from the government. They already knew about our leaflet entitled "The Money Myth Exploded" because they had been using it to explain the fraud of the economic system to the members of their group. When they knew that we were the Pilgrims of St. Michael, they were really happy of the encounter. So, we finally agreed in working together in order to continue transmitting our teachings on Social Credit.

Our apostolate continued in Lima, Peru, where we have to thank the Barbagelata Family with whom we had our first meeting.

The situation in all these countries is very much alike one to the other due to the national debts, unemployment, and despair. In Colombia, for example, they have to suffer the violence in the fields due to guerrilla warfare and the privatization of the federal and municipal services. Argentina is still trying to get out of its bankruptcy from the end of 2001. By now, the credits are restricted, the banking accounts are cancelled, and the depositors will not receive any money until 2013, while the Chinese market invades all places with their products that are cheaper than those made in Argentina. The light of Social Credit becomes more and more necessary. Its implementation to these realities is urgent, and the laity are continually being asked, as our Holy Father remarks, to be responsible to implement these changes. Let us not forget the promise made by Jesus Himself: “Seek ye therefore first the kingdom of God and his justice, and all these things shall be added unto you” (Mt 6,33).

“Christians who take an active part in modern socio-economic development and defend justice and charity should be convinced that they can make a great contribution to the prosperity of mankind and the peace of the world.” (Gaudium et Spes, n. 72.)