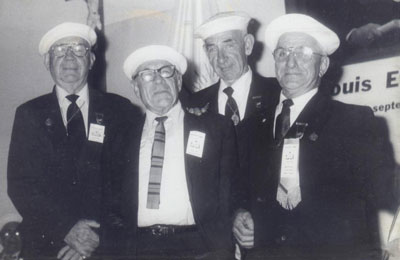 From left to right: Bob, Arthur and John Lambert with Gérard Mercier in Rougemont in 1988

John R. Lambert of Haydenville, Massachusetts left us for his heavenly home on June 26, 2007, just eight days shy of his 87th birthday. Uncle John will always be remembered by all who were blessed to have known him as a man of great faith. Attending Holy Mass daily, Uncle John lived his life for God, his family and his country. He will be missed by us all.

Uncle John was a man of incredible courage. God was given Uncle John’s trust in everything that he undertook and he never feared the outcome.

He had a great devotion to the Blessed Mother and entrusted all those he loved to her care. Beautiful stories of how she frequently intervened for him and protected him all thorough his life were shared by Uncle John often. During World War II, while he was proudly serving his country in Europe, a shell fell at his feet while he was on guard one night. He remembered being lifted as the shell dug in under him, but he never felt any fear as he was saying his Rosary and knew that the Blessed Mother was looking out for him, which she undoubtedly was as the shell never went off.

It was also at this time that he and his two brothers Arthur and Bob had the great privilege and blessing of meeting the mystic and stigmatic Theresa Neuman. The brothers witnessed her experience the suffering of the Passion of Our Blessed Lord. They later conversed and even shared a meal with this amazing woman which left a lasting impression on all three brothers which stayed with them the rest of their lives.

Uncle John was a very just man. Honest and hard working he was always helping anyone in need. Truly, he had a "heart of gold" and it was because of his incredible sense of charity that he understood so well the work of the Pilgrims of St. Michael. He greatly understood the need to denounce a financial system that permits poverty in face of an abundance given to us by God for the good of all mankind and promoted the implementation of Social Credit which puts into practice the Social Teachings of the Catholic Church for a more just financial system. (Editor’s note: John was for many years the champion for soliciting subscriptions to "Michael".)

As a Pilgrim of St. Michael he also shared his own love of the Virgin Mary with others through the Rosary Crusade which he participated in for many years with his brother Bob and good friend Ralph Laurin throughout the states of Massachusetts, Connecticut, Rhode Island, New York and Pennsylvania and even travelling as far as Toronto, Ontario. Many to this day still remember him going from door to door with his black bag under one arm and his rosary in his other hand knocking on doors and humbly asking those he met to recite a decade of the rosary with him. He loved the Blessed Mother with all his heart and recited her rosary faithfully every day of his life even struggling with his last breath to recite those words for the last time that he knew and loved so well.

Dear Uncle John, how all of Heaven must have rejoiced when those gates swung wide and you entered in, greeting them all with your great big "booming" voice and giving big "bear hugs" all around! You were our father, our brother, our grampa, our uncle and our friend; we will miss you very much.