The 80th Anniversary of the work of Louis Even

Written by Alain Pilote on Thursday, 01 May 2014. Posted in Louis Even

It was 80 years ago, in 1934, that Louis Even came across the writings of Scottish engineer Clifford Hugh Douglas, and as he explained later, it was a light onto his path that changed his life for ever. Five years later, in 1939, he founded, together with Gilberte Côté (who married Gerard Mercier in 1946) a periodical in French called Vers Demain (literally, Towards Tomorrow, for a better future) to make this light known. One therefore celebrates, in 2014, its 75th anniversary. A version in English, now called MICHAEL, was founded in 1953. A version in Polish exists since 1999, and one in Spanish, since 2003.

If you have come across this journal for the first time, by simply reading the headlines, you will immediately notice that this journal does not bring you the results of the last baseball game, the report of the third divorce or the fourth marriage of a star of Hollywood, or the latest holdups, murders, or road accidents in your area. Neither will you see in this journal advertisements from chain stores and supermarkets.

With only a quick look, you will have noticed that this journal deals with money issues, and that it also contains religious articles. The aim of this journal is very simple: to promote the development of a better world by applying Christian principles into society, especially into the economic field. This journal will denounce everything that goes against Christian principles or that can threaten order in society.

This journal is called MICHAEL, after Saint Michael the Archangel, the leader of the angels who fought Satan and the rebellious angels. Saint Michael is the Archangel of social justice, who represents the triumph of good against evil. It also means that the apostles who diffuse this journal, the “Pilgrims of Saint Michael”, are fighters who are inspired by this spirit of Christian justice. Moreover, the headquarters of this journal is based in Rougemont, Que., and the name of the parish church of this town is precisely Saint Michael’s.

Some people might ask why MICHAEL always speaks about the money question. Louis Even, the founder of this journal, wrote: “It is because every economic problem, and almost every political problem, is above all a money problem. We never say that the money question is the only one to be solved, or the only one that must be dealt with. We do not even say that it is the highest one, but it is certainly the most urgent one to solve, because all the other issues come up against this money problem.”

Consider all the different problems affecting society, and you will see that they are practically all related to money: governments trying to reduce their deficits and debts by cutting into services and increasing taxes, families that cannot make both ends meet, the murder of the unborn because parents cannot afford to feed extra children, the selling of pornography and the exploitation of the human person to make a buck, the pollution of the environment to keep production costs low, etc.

It is for these reasons that Louis Even decided, in 1934, to spread the Social Credit doctrine — a set of principles and financial proposals that were set forth for the first time in 1918 by the Scottish engineer, Clifford Hugh Douglas, to solve the problem of the chronic shortage of purchasing power in the hands of the consumers. The words “social credit” means social money, or national money, money issued by society, as opposed to the present money that is a “banking credit”, money issued by the banks.

When Louis Even discovered the great light of Social Credit in 1934, he immediately understood how this solution would put into application Christian principles of social justice in economics, especially those regarding the right of all to the use of material goods, the distribution of the daily bread to all, through the allocation of a social dividend to every human being.

Moreover, the words “social credit” also define what binds society together (“credit” is another word for “faith” or “confidence”) — the mutual trust or belief in each other which allows one to exchange goods and to circulate freely without the fear of being attacked on the street, or of being robbed by one’s neighbor. Without respect for the moral order — in other words, without religion — any life in society is impossible; there is instead disorder, revolution, and anarchy.

The objectives of MICHAEL are clearly set out on page 2 of every issue, just below the logo. One can read, on the left: “A Journal of Catholic Patriots, for the Kingship of Christ and Mary, in the souls, families and countries.” And on the right: “For social justice through economic democracy in accordance with the teachings of the Church, through the vigilant action of heads of families, and not through political parties.” This means, among other things, that the “Social Credit” philosophy that is referred to here has nothing to do with political parties, not even so-called “Social Credit parties”, but it is simply an economic reform that can be applied by any political party in power.

This “Social Credit” philosophy represents a new conception of economics, so do not get discouraged if you do not understand everything after reading only one article. The more you read and study the Social Credit philosophy, the more you will understand it. A good method is to keep back issues — what many of our readers do — and read them again and again, because Louis Even’s articles always remain timely.

Who is behind this journal?

Louis Even was born on March 23, 1885 in Montfort-sur-Meu, 30 kilometres west of Rennes, in Brittany, France. He was christened Louis Marie, in honor of Saint Louis Marie Grignion de Montfort, a great apostle of the devotion to Mary, who was also born in Monfort-sur-Meu in 1673. Louis Even inherited his great devotion to Mary from this illustrious patron saint.

Louis Even came from an exceptional family; he was the 14th of a family of 16 children. Six of his brothers and sisters entered religious communities, and he himself became a Brother of Christian Instruction, at the age of 17. Louis Even arrived in Canada in 1903, when religious were chased out of France by an anticlerical government. He taught in Montana, U.S.A., then in the Montreal area until

Everything is done voluntarily, and no one gets any salary. Beside hundreds of part-time apostles who give all of their spare time to solicit subscriptions, there is a core of full-time apostles who are lodged in our headquarters in Rougemont. Their lives are quite similar to those of religious communities; the only difference is that our full-time Pilgrims don’t make vows, each one giving the number of years he or she wants to — some give a few years, others all of their lives. The ladies live in the House of St, Michael, built in 1962, and the men live in the House of the Immaculate, built in 1975, where our monthly meetings, weeks of study, and annual Congress are held. Besides the magazine, our Pilgrims also distribute, for free, millions of offprints among the population.

In passing, the “Pilgrims of Saint Michael” or “White Berets” are not a cult nor a sect; they invented no religion: they are Roman Catholics who preach loyalty to all the teachings of the Roman Catholic Church, whose leader today is Pope Francis. They go to Mass every day, and they received from Most Rev. Albert Sanschagrin, who was bishop of their diocese (Saint Hyacinthe) in the 1970s, the permission to keep the Blessed Sacrament in the chapels of their two houses. Bishop Sanschagrin came to celebrate the first Holy Mass himself in the chapel of the House of the Immaculate in 1976. 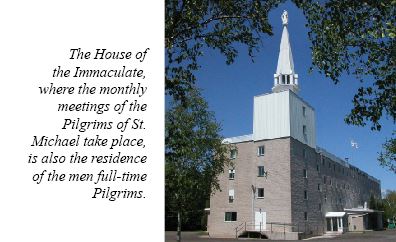 The need for apostles

Finally, you will notice that this journal stresses apostolate work and the importance of finding new subscribers, to make our message known to new people. In our journal, we congratulate, for example, people who took so many subscriptions, or who distributed so many offprints. It is because the Social Credit principles can be applied only through the education of the people, to create a public opinion that is strong enough so that the authorities in power, no matter what party they belong to, will have no choice but to apply these principles. The power of the Financiers lies in the ignorance of the people, and the Financiers will lose this power only when the people learn about their confidence trick.

Anyone who reads these lines can become an apostle of MICHAEL; in fact, all of our readers are invited to solicit subscriptions to our journal and to distribute our leaflets in their areas. You who love MICHAEL, you are convinced that everyone should receive such a paper, but you probably have never asked anyone to subscribe to it. Have you ever thought that if every reader of MICHAEL did like you, MICHAEL would have to close down? To get other people to subscribe to “Michael” is not only the responsibility of a few apostles who dedicate themselves all year long: it is also the responsibility of all those who have come across the great light found in MICHAEL, or in other words, of all the readers of MICHAEL.

C.H. Douglas once said that what matters is not the 1920, at the age of 35, when he was released from his vows because he had become deaf and could no longer teach. (At that time, hearing aids did not exist.)

But God had His designs on Louis Even, who was to become himself the founder of a Work that is unique in the world, the “Pilgrims of St. Michael”, to overcome the financial dictatorship. Louis Even died on September 27, 1974; Mrs. Gilberte Côté Mercier continued as Director and editor until her death in 2002. Since then, our Movement is led by Therese Tardif, who celebrates this year sixty years of involvement with the Pilgrims of St. Michael as a full-time apostle.

Over the years, a multitude of apostles have joined them, and a whole movement of apostles, called the “Pilgrims of Saint Michael”, was founded to diffuse this journal to make the Social Credit message known as widely as possible, not only in Canada, but in as many countries as possible. These apostles go from door to door to solicit subscriptions to MICHAEL, and they can be recognized by the white beret they wear.

number of people who know about Social Credit, but the number of people who are ready to do something about it. So, there is a part for you in this battle for more justice: you can content yourself with being just a spectator who is sympathetic to these ideas, or else you can become an active member who makes an extra effort to make these ideas known to others. Come to our meetings, call or write for subscription forms and leaflets to distribute around you. You can make a difference in this battle, so think about it... and take action! We hope to hear from you soon!