“Social Credit is a light upon my path”

A testimony given by Fr. Faustin Nyombayire of Rwanda

In the previous article, Louis Even explains that today’s financial system is flawed, it is based upon false accounting, and people lack the purchasing power they need to buy the basic necessities of life. Upon discovering the writings of the Scottish engineer, Clifford Hugh Douglas, in 1934, on the financial reform called Social Credit, Mr. Even exclaimed: “This is a light upon my path. Everyone must be made aware of this.” This is what led him to abandon everything else for this cause and to found the MICHAEL and Vers Demain Journals.

People who discover and study Social Credit in greater depth react in the same way. Since 2006, study sessions on the Social Credit monetary reform, i.e. on Economic Democracy, have been held twice a year in Rougemont. They were attended by students from all over the world, many of whom were African priests and bishops. To this day, more than seventy African bishops have taken part in these study sessions. The last of these sessions was held April 14-23, 2016, and once again, all participants were delighted.

Note that the next study session in Rougemont is to be held July 21-29, 2016 (in French, with simultaneous translation into English). It will be followed by our annual Congress. An English-only session will take place in Rougemont on August 21-27, 2016. Here is the testimony of one of the participants, Fr Faustin Nyombayire, from the diocese of Byumba, Rwanda. He is the Rector of the University of Technologies and the Arts that is attended by some 3 000 students. 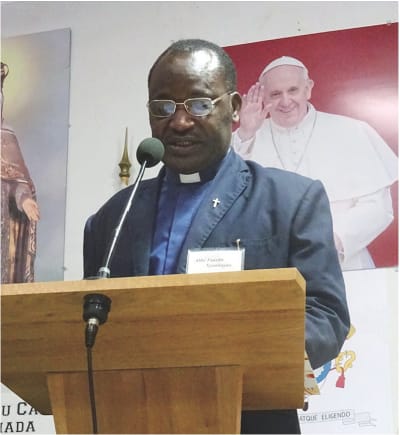 I have known about the Work of the Pilgrims of Saint Michael for a year or so. A colleague who came here, spoke about it and soon after, a member of our diocese who now lives in Canada and who is a fervent follower of this Movement… For the last six months, I obtained more information on the internet. On the plane that was taking me from Kigali to Amsterdam and from Amsterdam to Montreal, I glanced through and eventually perused through the Special Issue “Who are the REAL rulers of the world?” If I were to say a single sentence, it would be the following, the one you have already heard: “A light upon my path!”

These are the words Louis Even exclaimed upon reading J. Crate Larkin’s book From Debt to Prosperity. This one writing set this whole Movement in motion. “A light upon my path”, I now make mine these words. Everyone must know this.

These weeks of study on Economic Democracy seen in the light of the social doctrine of the Church, have lead me to believe, as Douglas did, that Social Credit is nothing less than applied Christianity.

I mentioned it shortly before my getting here. I had read “Who are the Real rulers of the World?” and I was already bewildered at discovering this sad and terrifying truth, but I was also outraged at the thought that people ignore this, beginning with myself, a priest involved for some time in a national initiative to make known the social doctrine of the Church. I had no knowledge of these matters even as a teacher and as Rector of a University.

So, through these weeks of study, well directed by Mr. Alain Pilote, and through all the substantial elements that were offered including the icing on the cake provided by Mr. François de Siebenthal, we were, I was able to identify the root of the evil and the part played by the Evil One within the system that now governs the world.

The banking system that has taken over the power of governments who ought to be sovereign, exercises the right of life and death – more so the right of death – over whole populations that it maintains in misery. I did not know the meaning of the national debt. And this network’s deceit that consists in calling a blessing what is truly a curse (the public debt). The perverting of this same system that creates money out of nothing to eventually make it disappear into the abyss but an abyss that annihilates whole populations in the process. This places us inches away from the devil’s tail, from its sinister face that brings such harm to God’s children.

And I have learned – so did my colleague and the other participants – that poor countries are not predestined to be poor, because of some fatality, that countries that are said to be poor can in fact be rich countries, under one condition: they must regain conscience and be who they truly are, first by understanding what money is, what currency is, what debt is and what the cursed interests are.

The situation in Switzerland is an illustration of this: a country lacking in everything, materially speaking, has become rich by building with God in mind and by applying what God wishes of us. God wants us to be happy. He has created us so that we might enjoy happiness, not misery.

I have discovered and learned that the social doctrine of the Church is a most urgent aspect of the Church’s apostolate. I was surprised – and not alone – in discovering that some of the Church’s documents have been set aside. I am thinking of Vix Pervenit, and I believe that in this apostolate one must call a spade a spade, and evil, evil. This is what the sovereign Pontiffs of the latter centuries and of today – we are blessed with having a succession of holy popes, more so in recent times – have said and are saying: to put an end to usury; they condemn usury and rise against the worshipping of the modern golden calf that money is, as pope Francis often reminds us.

Upon seeing the Work of the Pilgrims of Saint Michael, the way you live, the way we have in these last few days, I repeat that this is both Martha and Mary together doing the Work of God. At times, while busy talking about eternal salvation, we forget that God has also given us a body, that he did not stop at creating our soul. In human matters, we must therefore take into account our material well-being since we are not angels.

I will quote a mystic whose words I will apply to you since this is what I see here: “A prayer that is cut off from everyday life, that does not transform us, is but an illusion; also, all activity, even the noblest, that is not rooted in prayer, that does not draw from the true source, is not activity, it is agitation”. And the Church does not meddle in political affairs should it engage itself in Social Credit.

Money must also be part of our apostolate. François de Siebenthal quoted the French writer Balzac in saying that if the Church does not concern itself with the question of money, it will have failed its mission. This may sound rude, but a missionary used to say that money is excreted by the devil. But money can also be clean: Interest-free money.

I was both indignant but also happy to learn of these invisible powers, allies of the devil or agents of the devil such as Freemasonry and the Illuminati that direct and manipulate our leaders. They may not be lacking in good will, but these networks manipulate them, they turn our leaders into puppets, and hence, they do not expect our leaders to improve our countries but rather to fight for the bankers’ interests. And this is diabolical.

What then do I retain and what do I leave with to be used by our local church and for our country? We must have the courage to be our own selves.

We are created in God’s image. We are born kings, priests and prophets, saved by Jesus Christ. But we are called upon to enlighten our conscience and to shed light around us. We must resist ideologies that bear the culture of death, in the words of Saint John Paul II. Let us reflect here upon such theories as gender theory that would have us believe that upon creating man and woman God might have committed a mistake; one is to decide whether he or she will be man or woman. This is one of many aberrations. This brings grist to the devil’s mill, he who unleashes the bankers, leading to our ruin.

To dare to be our own selves, means to stop being influenced by those who have sold their souls to Lucifer. Social Credit, “applied Christianity”, is worth being known and is worth our making it known in all places and above all amongst the young, amongst academics who constitute my primary field of apostolate, and to this I commit myself. And tomorrow will be a better day.