on Thursday, 01 October 2009. Posted in Testimonies

Here are the words of Msgr. Placide Mukendi, vicar general of the diocese of Mbuji-Mayi in the Democratic Republic of Congo during the week of study in Rougemont on August 31, 2009:

I would like to first of all thank Most Rev. Nestor Ngoyi, Bishop of the diocese of Kolwezi in the Democratic Republic of Congo, who was the first person who spoke with me about Social Credit. It is he who arranged to have Mr. Marcel Lefebvre and Fr. Albert Kaumba visit our diocese, something that was perhaps not even in their program!

Secondly, I would like to thank the directress and all the organizers of the week of study and Congress that has permitted me to hear what I’ve heard and to see what I’ve seen. Above all what struck me, my brothers and sisters, was the spirit of family in which we are living. I see among you those of a certain age, but also young people, even very young people who are convinced of Social Credit and who have become Pilgrims of St. Michael.

In February of 2009, our diocese of Mbuji-Mayi had the distinguished honor to welcome two visitors of note, Mr. Marcel Lefebvre and Fr. Albert Kaumba. These important two visitors came to bring a message, a message of liberation and hope that we have called social credit, an alternative and efficient method to fight against poverty.

For this purpose, when they arrived in Mbuji-Mayi we went to make a courtesy visit to our bishop, His Excellency Bishop Tharcisse Tshibangu, he is the bishop emeritus since August 1st. The next day we went to visit the auxiliary bishop, Most Rev. Bernard Emmanuel Kasanda, who is now the diocesan bishop. I should say that these two bishops are very interested in social credit and Bishop Tharcisse Tshibangu even asked his secretary-chancellor to put the theme of social credit in the program of a social week anticipated for the year 2010.

Mr. Marcel Lefebvre and Fr. Albert Kaumba had the occasion to give six conferences that were really very much appreciated: above all, three that were destined for the clergy, the religious, the committed lay people and those who are the people of God. The conference was given in the multipurpose hall of the diocese. Also they gave three conferences in the student area, at the ISP (Institute of Superior Instruction) of Mbuji-Mayi, at the Major Seminary of Mbuji-Mayi and the University of Mbuji-Mayi. I have to say that the impression I had was that the students were very attentive. They were very interested and they received the message very well. After the conferences, the big question that they asked was: "But when can we put social credit to work, when can we start!" This is to say that the message was well understood, that it was really received well.

Now, how does the diocese intend to spread the message (of social credit), not only in Mbuji-Mayi but also in all our ecclesiastical provinces? The small organizing committee who was charged with receiving our guests was transformed into a sympathetic committee of Pilgrims of St. Michael, because they understood the cause. The committee understood that in order to bring the message to the people, they had to be well formed and even very well formed. That is what we have started doing, beginning with the social doctrine of the Church, that is fundamentally the same as social credit, as the Pilgrims of St. Michael teach it. More than that, we say: "That this message may attain every layer of the population in our diocese; we must wait for the priests." In our diocese we have a program of permanent formation for priests: so the theme of social credit was inscribed to this program for the priests starting with this pastoral year that will start in the month of September.

Outside of the diocese, we will look forward to hearing all of ecclesiastical province of Kananga. This means that the theme of social credit will be brought to the provincial meeting in the month of November, so that all of the bishops will be informed that this small committee will with their blessing, furrow through all of the dioceses of Kasanga.

In the city of Mbuji-Mayi the salaries are generally salaries of misery (and this applies all over the country), monthly salaries that do not permit them to live even for one week. What do they do for the other three weeks? How do they live? Pastors witness people of all sorts file by, those who had worked and received a salary that they can no longer have, children chased from the schools (because they can no longer pay their classes), the sick; all of these people believe that they will find a solution from the priests of the parish that they know. But unfortunately, the financial crisis attacks even the clergy, because we have collections in our parishes that do not go above ten dollars… In order to buy a bottle of wine and a bag of small and large hosts, it costs more than ten dollars! This means, my brothers, that there are parishes that have difficulties finding something with which to celebrate the Eucharist on Sunday.

So when a nation is living in misery and poverty and we tell them that there is a way out, how do you expect them to say no! This is why social credit, as presented as an alternative and an efficient way to fight poverty, was received with open arms in the diocese of Mbuji-Mayi.

In conclusion, I wish to pay a vibrant homage to Mr. Louis Even, who helped us to understand that there is a way to find a solution to this problem of poverty. But it is a battle, a desperate battle that is being fought. And this battle is not waged against the smallest, but against the most powerful of this world, against high finance. My brothers and sisters, we cannot forget this. This is why each morning, when I heard the knock on the door, "Ave Maria, rise for the battle" I say: "Do we realize that we are at war?"

I thank all of you, each and every one of you, for your engagement. Because we do it so that people may move, someone must move; and if we all move, it is because Louis Even moved, is it not? So from the moment where we are people who are moving, I know that the world will move… Victory may not happen today, but I know that with Our Lady, victory is assured. So let us go forward and social credit, that is, economic democracy will come to pass. 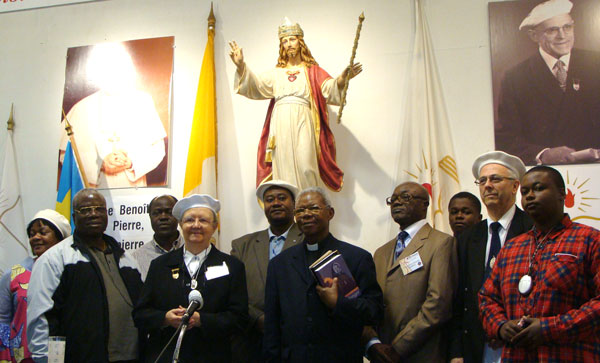 Representatives from the Democratic Republic of Congo at our Congress