Pierre Marchildon passed away on December 17, 2007

Written by Thérèse Tardif on Tuesday, 01 January 2008. Posted in Obituaries

An exceptional missionary left us for Heaven 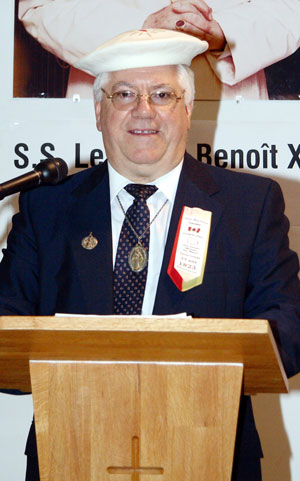 In his recent encyclical letter Spe Salvi on Christian hope, Pope Benedict XVI wrote: "The true stars of our life are the people who have lived good lives. They are lights of hope."

These words fittingly apply to our beloved and dynamic Full-Time Pilgrim of St. Michael, Pierre Marchildon, who suddenly passed away on Monday, December 17, 2007, at the age of 59 years and 8 months. It is really a great loss our Movement, for he was truly an exceptional Pilgrim, who achieved a lot in various countries, as you will read a little further. We must pray to the Master of the harvest to send us ten young Full-time Pilgrims to take his place, because the death of Pierre Marchildon left us with a great emptiness.

The circumstances of his death

After passing many medical examinations from which the results were not very alarming, Pierre Marchildon, accompanied by Jacek Morawa, entered in the hospital of Mississauga, Toronto at 7 p.m. on December 17. While they were at the reception desk, he passed out, and so right away the medical team worked to revive him and brought him to emergency surgery. They did the necessary operation but the main artery to the heart was completely blocked. It was impossible to revive him; all the small veins around his heart were already dead. At 10 p.m. the soul of Pierre Marchildon had already left his body as the doctors finally abandoned the fight against death. May God’s will be done.

His birth and social credit beginning

Pierre Marchildon was born on April 15, 1948 in Lafontaine, Ontario, in the French-speaking area of the Shrine of the Canadian Martyrs, towards whom he had a fervent devotion. His uncle, Fr. Thomas Marchildon, was a Jesuit and pastor of the parish, and also one of the first collaborators of Louis Even, the founder of the Pilgrims of St. Michael. He received the Pilgrims into his rectory and organized meetings in the parish hall which was filled to capacity each month. This is why the mother and father of Pierre, Mr. and Mrs. Clement Marchildon, were both solid Social Crediters. Pierre was the ninth of their ten children.

When his mother, Virginia Hamelin-Marchildon, became a widow, she did the door-to-door crusade herself for our Movement. She received the directors and the Full-time Pilgrims at her home when they passed through her area. It is in this climate of charity and justice that Pierre was raised, he never claimed anything for himself and was always ready to help whoever needed his services; it was in this manner that he was formed.

On March 8, 1974, at 25 years of age, after a youth that was a bit frivolous, Pierre Marchildon joined the Pilgrims of St. Michael full time. According to his own testimony, he had gone to pray in front of a statue of the Blessed Virgin. This statue of the good Mother conquered him by moving her eyes, and from that moment he was completely transformed and decided to retire from the modern world and become an apostle for the Michael Journal.

His brother Mark told us that his mother was sad as she saw her Pierre leave on adventure in the movement of the Pilgrims of St. Michael, but she received her consolation when she saw the radical change that came about in the life of her son. She saw as well his fervent love for God and the Blessed Virgin and his total devotion in a work that she loved and served herself.

Her Pierre was consecrated to Mary according to the spirituality of St. Louis-Marie Grignion of Montfort on Holy Thursday, April 3, 1980. (See picture above.) He really lived his consecration; he was totally Catholic, without measure. He assisted at daily Mass every morning and took his strength from the Eucharist. Again on the morning of his death, he had assisted at the Holy Sacrifice and received Jesus in his heart.

He gave himself totally for 33 years. He was responsible for the city of Toronto for the Pilgrims of St. Michael, and had a group that was as vigilant as he was. His monthly meetings were always well attended: by Canadians and other nationalities, there were always an imposing group of Polish people present. It is in this ardent home that was animated by Pierre Marchildon that gave us Jacek Morawa and Janusz Lewicki, editors of the Polish version of the journal and Carlos Reyes from Quito, Ecuador, who is the editor of the Spanish version. So one can truly say that Pierre was the initiator of our editions in Polish and Spanish.

Mr. Marchildon spent a lot of time on the telephone to invite the people to his monthly meetings and he was always successful. His conferences were excellent, but according to those who assisted at his last meeting on December 9, he surpassed himself. He had decided not to speak because he was tired, but without any preparation, as if inspired by the Holy Spirit, he gave a speech that lasted for two hours. His talk was profoundly spiritual, according to the testimony of his collaborators in Toronto. Those who heard him were moved. On Wednesday, December 12, four days before his death, he went to hold a meeting in his native parish in Lafontaine, Ont. His brothers Mark and Maurille, two good Social Crediters, and others from his family and friends saw him then for the last time. 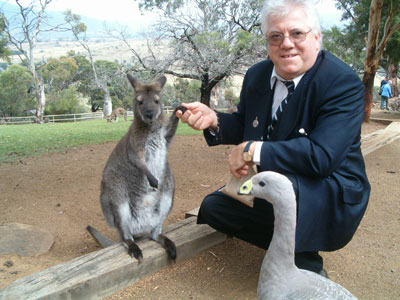 Pierre was making friends and Social Crediters with everyone... even with the kangaroos in Australia!

Each year the name of Pierre Marchildon was always among the first in the list of subscriptions with an average of 3,000 subscriptions per year; for many years he went over 4,000 subscriptions in a year. On the day of his death we received his report in the mail: 34, 30, 22, 21, 25, and 24 for a total of 156 subscriptions in 6 days. We can say that he died on the battlefield of the apostolate. He never took vacations, his fervor and his dynamism encouraged many others and he won the hearts of all those who came in contact with him.

May his example and tenacity rise up a multitude of souls who are as zealous as he was. He was a man of the road, of the door to door crusade and the telephone; he was a great missionary in many countries of the world. When he was not going door-to-door or holding a meeting, he was on the telephone inviting people to his meetings. Even in the car when he had a driver, he would bring his cell phone to telephone people as he was traveling. If he had success, it was because of his enthusiasm and his great efforts.

He traveled throughout the world

Pierre Marchildon traveled throughout the world as was the wish of Louis Even. Over the years, he visited over 15 countries in various continents to spread the light of Social Credit.

Since he was bilingual he went to all the provinces of Canada and almost all of the states in the United States, begging a place to stay and meals, changing his resting place every night during his three month tours. He did a tour of 6 months in California and the surrounding area with Patrick Tetrault without going home at all.

He went also to spread the good news in a great number of countries, in Europe; France, Belgium, Ireland, Italy and Poland; in Poland on top of his many meetings, he spoke on Radio Maria which gave him the opportunity to give his message to 10 million Polish people throughout the world; in Africa: Ghana, the Ivory Coast, Nigeria, and Congo (ancient Zaire) where accompanied by Jean-Pierre Richard, he met the Cardinal, four archbishops, and 15 bishops; in Oceania: Australia and New Zealand; in Latin America: Ecuador, Colombia, Peru and Argentina, etc. And everywhere that he went, apostles came after him. His conferences left hope for a better world to the families, a world of justice, peace and prosperity. He explained to them in just a few words the cause of poverty in the world and the people understood him, were enthusiastic, and wanted to help.

The messages of sympathy that we have received from all over the world gives testimony to his life. We will cite only three here that resume in just a few words the sentiments of many others around the world:

From Most Rev. Benjamin Almoneda, Bishop of the Philippines:

"I am very surprised to hear of the death of Pierre, who was such a zealous Pilgrim of St. Michael. I was hoping to see him here with us in the Philippines to propagate the message of the social doctrine of the Church by the program of peace and justice of Social Credit. But Our Lord had better plans for him. In the arms of the Father, he will do more for us and with us… I will offer my Mass for him today with all of my seminarians. I will be close to you, profoundly united in prayer in front of the Christmas manger. Pierre has received the most precious gift of all… eternal rest."

From Most Rev. Nestor Ngoy, Bishop of Kolwezi, Congo:

"I have just learned with consternation of the death of Mr. Pierre Marchildon. To you and to all the Pilgrims of St. Michael, as well as the family, I present my most sincere condolences and prayers so that his soul may enter into the Glory of God.

"I see once again this robust man who spoke with such conviction who held the rapt attention of his audience. I see once again this apostle of Social Credit in our country, (20 years ago in 1987) where the seed finished by growing in me. May the merciful God receive him as a faithful servant."

"Thank you for letting me know about dear Pierre. I am greatly saddened, but am also left with wonderful memories of his joyful smile and of the shining Hope of which he shared with everyone. He has been a wonderful example of a life lived in the footsteps of Jesus. When he was in New Zealand three years ago he won the hearts of everyone he came in contact with. His generosity, devotion, and love of neighbour easily came through in his voice and manner. He was an excellent public speaker, mainly I think because he spoke from the heart.

"May he rest in Peace. I have notified those in New Zealand who met Pierre, at least those of whom I can presently think of. I know that everyone he met here will be joining with me in sending their deepest condolences. God bless." 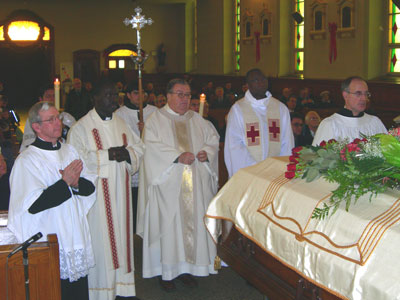 Fr. Boguslaw Jaworowski from Poland will celebrate thirty Masses for the repose of the soul of his good friend Pierre. Fr. Tadeusz Bienasz from Austria, Fr. Joao Pedro Cornado, S.J. from Brazil and many other priests from different countries who collaborated with Mr. Marchildon will also celebrate a Mass for him.

Thirty Masses are to be celebrated at the Cistercians Monastery in Rougemont, starting on January 5th.

The funeral was celebrated at the parish church of St. Michael in Rougemont, on Saturday December 22, by the Pastor, Fr. Jacques Chaput, who was accompanied by Fr. Edmond Brouillard, Oblate of Mary Immaculate and Fr. Pamphile Akplogan and Fr. Albert. (See picture.)

We ask Pierre Marchildon to raise up among the youth of all the countries where he visited, convinced, valiant and enthusiastic apostles as he was, so that our world can live in peace, justice, and prosperity under the reign of Christ the King and Mary Immaculate.