Our wonderful mission in Paraguay

Written by Lucie Parenteau on Sunday, 01 April 2007. Posted in Expansion

Providence has decided that the time has come for our movement to be known in Paraguay and though our work, Major Clifford H. Douglas’ awesome philosophy of Social Credit.

Everything started with Mr. Carlos Reyes, the editor of "San Miguel" (the Spanish version of the "Michael" Journal) meeting with a priest from Paraguay. This priest was so impressed and enthusiastic about our work and the philosophy of Social Credit that he asked for free "San Miguel" leaflets to be sent in his Diocese of Ciudad del Este. A few months later, a 20-foot container filled with 750,000 leaflets headed for South America.

In February, Paola Santamaria and I left for a month of apostolate in Ciudad del Este in response to an invitation from Bishop Rogelio Ricardo Livieres Plano. A few months previously, they had received the container of leaflets. The Diocese of Ciudad del Este is located next to Brazil, with a river separating the city of Ciudad del Este with Foz do Iguaçu, where the famous waterfalls of Iguaçu are located.

Paola, who is 27, left from her home country of Mexico and I left directly from the Headquarters in Canada. And the two of us are now in this warm country, where a beautiful, simple and very welcoming population was going to surprise us by their openness and their concern for the economic future of their country.

Shortly after our arrival, we met with His Excellency, who is a member of Opus Dei. He cordially received us in his Diocese, opening the doors wide for our apostolate and named Fr. Edgar Ayala as our advisor. Fr. Ayala is a newly ordained priest who was the personal secretary of the Bishop at the time.

After making the acquaintance of Monsignor’s mother and sister, the first encounter Father Edgar organizes for us is with part of the young Diocesan leaders of the Youth Pastoral. He gave us a presentation of the Youth Pastoral, and we gave him some idea of who we were, and the work that we are doing. The Youth Pastoral’s dynamic coordinator Carlos Franco, who is 25 years old, already had distributed the "San Miguel" leaflets in the Diocese with the young leaders of the pastoral, and he was delighted to learn more about our work and Social Credit.

A few days later, we were at the National Youth Pastoral meeting, invited by Carlos Franco, to give an official presentation of the 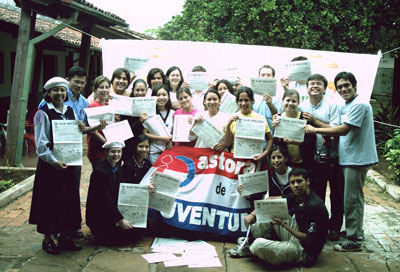 Work of the Pilgrims of Saint Michael to all of the coordinators of the pastoral. Later on, we attended a Diocesan meeting of 60-70 parish leaders for another presentation of our Work.

As time went on, and the more the people came to know us, the more they were interested in what we were doing. We spoke on three different radio stations, to different parish groups, in a few churches, in the most prestigious college of the city, we sold books on Social Credit, and took subscriptions... what really impressed these good people was Social Credit, it gave them hope. The Paraguayans answer was so positive, and the response of a few young people to be part of the Movement was so enthusiastic, that Paola Santamaria extended her stay. Now there is a group of a dozen young people who want to be Pilgrims of Saint Michael and do the apostolate in their country. They are working hard to get the necessary funds in order to come to Canada for a period of formation and for our International Congress in September.

Another surprise was waiting for us in Paraguay, the container of close to 800,000 leaflets was distributed in the whole Diocese (which has 40 parishes and about 600 chapels) and there were almost no copies left. Having no more leaflets to give out to the people, so we sent an order to Canada and another container carrying 750,000 leaflets has been sent out.

Thanks to Our Blessed Mother and through the grace of God, our tour in Paraguay was a great success. Many thanks as well for the gracious collaboration of the people in Paraguay. It was truly a wonderful experience.