Official Opening and Blessing Of San Miguel’s Mission in Ecuador

Written by Marcelle Caya on Tuesday, 01 May 2018. Posted in Pilgrims of St. Michael 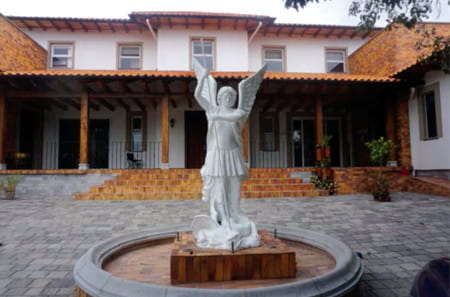 Front view of the Casa de la Inmaculada in Ecuador, with the statue of Saint Michael the Archangel 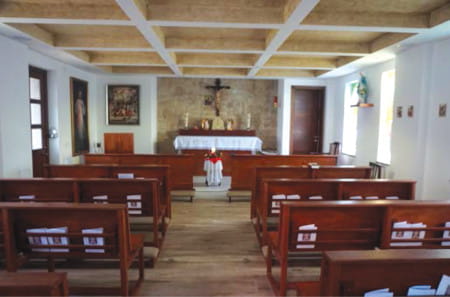 The Second Vatican Council produced the document Apostolicam Actuositatem (Apostolic Activity), in 1965. “The Decree on the Apostolate of the Laity” described the nature, character and diversity of lay apostolates, and stated their basic principles and objectives. Foremost, we are told that a lay apostolate has a divine source:

“The laity derive the right and duty to the apostolate from their union with Christ the head; incorporated into Christ’s Mystical Body through Baptism and strengthened by the power of the Holy Spirit through Confirmation, they are assigned to the apostolate by the Lord Himself.”

In Canada, layman Louis Even began his mission to advocate for a better world in 1935, and a lay apostolate was formed. Today, we see the fruits of his work in the commitment of disciples “assigned... by the Lord Himself,” who have followed Louis Even’s vision with love and perseverance. A branch of the tree has now taken root in Spanish speaking South America.

An example of this commitment are Mr. and Mrs. Carlos and Teresa Reyes of Ecuador. In 2003, the Reyes joined us at the Michael House in Canada for a week of prayer and adoration before the Blessed Sacrament, called the “Siege of Jericho”. Following this, the couple were called to leave their careers and join the lay apostolate movement as full-time Pilgrims. They were inspired “by the Lord Himself” to advance the Social Credit principles that would fight misery in the world. These principles were formulated by Clifford Hugh Douglas, and taught by Louis Even.

Carlos, born in Ecuador, began to translate and publish VERS DEMAIN into  his native Spanish language; SAN MIGUEL has recently published its 75th issue! With the support of the Louis Even Institute for Social Justice in Rougemont, Canada, he earned a Master’s degree on the Social Doctrine of the Church from the Salamanca Pontifical University in Madrid, Spain. Teresa, born in Poland, contributes to the translation of articles for both the Polish and Spanish editions of MICHAEL and SAN MIGUEL.

Over the years, the couple have hosted meetings, conferences and study groups in Ecuador, Canada, Spain, Poland, the United States and in many South American countries. They have organized and held Study Sessions on Economic Democracy and organized “Sieges of Jericho” in Quito and Guayaquil, Ecuador. Carlos offers a course on “Economic Democracy and the Social Doctrine of the Church” on the internet. It is evident that both Carlos and Teresa are passionate about spreading Louis Even’s work throughout the Americas.

Misión San Miguel opened in Ecuador in 2017 as the result of their dedication and inspiration. 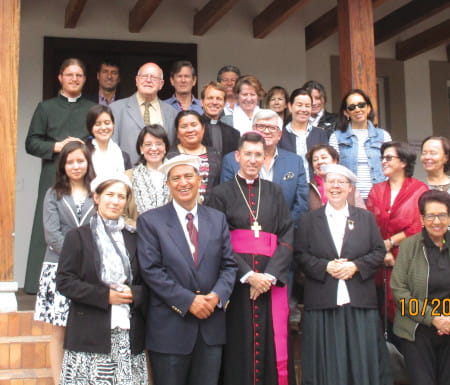 A proud crew of Pilgrims, including Mr. Renaud Laillier, from France, Miss Celza Bonilla from Kitchener, Canada and this writer, Marcella Caya, a full-time Pilgrim from Rougemont, Canada, were happy to represent the motherhouse and participate in the opening of the Casa de la Inmaculada. We were enthusiastically welcomed by Carlos and Teresa.

The house, surrounded by mountains, is situated in the Guyallabamba neighbourhood of Chaquibamba, 42 Km from the capital city, Quito. The scenery and setting are breathtaking.

Just nine months before, the ground was broken and the first spade of earth was turned by His Excellency Fausto Trávez Trávez, Archbishop of Quito and Primate of Ecuador. After much planning and hard work, a magnificent mission site was born and recently dedicated!

Carlos and Teresa have worked with Church authorities in Ecuador from the beginning of this project. On August 7, 2017, the Pilgrims of Saint Michael of Ecuador received a great honour when Archbishop Fausto Trávez Trávez agreed that a chapel could be built at the Casa de la Inmaculada.

The first objective of Misión San Miguel is integral formation. As in Canada, Study Sessions are organized on the basic teachings of the Catholic faith, and the principles of Economic Democracy, also known as Social Credit, are taught in light of the Social Doctrine of the Church. The second objective is to provide young people with the opportunity to deepen their faith and to create a more Christian and just world by spreading the principles of Economic Democracy.

With a focus on welcoming young people, we all hope and pray that Spanish-speaking youth will come to appreciate the important role of the laity in evangelizing the cause of social justice as embodied by the principles of Economic Democracy.

Renaud Laillier and I enjoyed participating in some of the final stages of construction and appreciated Carlos’ leadership in the project.

We were honoured to be at the Casa de la Inmaculada when the statue of St. Michael was placed at the building’s entrance. We also were overjoyed and blessed to attend the first Mass, celebrated on October 21, 2017, with about forty friends in the Chapel of the Immaculate [Conception]. His Excellency and Auxiliary Bishop of the Archdiocese of Portoviejo, Eduardo J. Castillo Pino, presided.

Bishop Eduardo expressed his appreciation for the Reyes’ efforts and stated that he understands the importance of changing today’s financial system in order to achieve justice and peace.

Two days later, on October 23, 2017, Archbishop Fausto Trávez Trávez visited for the official opening and blessing of San Miguel’s Mission in Ecuador, and presided at a Mass in the beautiful chapel. 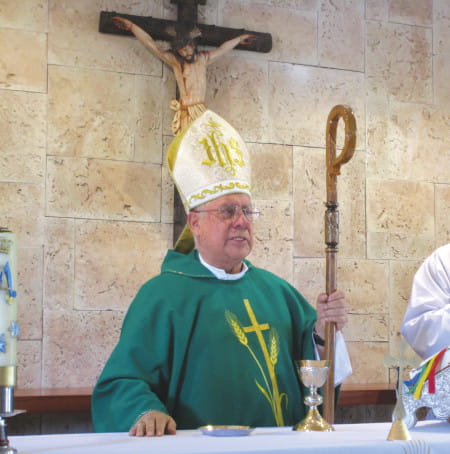 Archbishop Fausto shared with us that he had an early devotion to Saint Michael. He expressed appreciation for our Rosary Crusade apostolate, which consists of visiting families with a two-fold purpose: to pray a decade of the Rosary together and to offer subscriptions to the magazine, SAN MIGUEL.

The two October celebrations were followed by sessions describing the work of the Pilgrims of Saint Michael. These sessions were the first of many future uses of the new meeting room. A banquet followed that allowed us to enjoy the company of our benefactors, friends and guests.

Renaud Laillier offered his impressions: “Here is the work of Louis Even! We are now rooted in South America! What a beautiful achievement! The birth of a centre for Social Credit in South America is an excellent development for the movement. I thank you again, my friends, for making possible the graces that God has sent me. Deo gratias, Ave Maria!

Carlos and Teresa Reyes shared with us the events that took place after the official opening: “In December, in the early part of Advent, the parish priest of Guayllabamba asked us to host a retreat for the members of the parish’s lay organizations. Approximately 150 people attended. We were well accepted and the San Miguel Mission was well received.

“With God’s grace, we will begin a program of formation in January and February, 2018, by conducting two one-day retreats. One will be held January 27, for the ladies, and the second, for men, will be on February 10. After this, with God’s grace, we will host the first Study Session on Social Credit and the Social Doctrine of the Church, from February 28th to March 3rd.”

It was a very full and enriching experience to visit this beautiful country. Its culture embraces brotherly relations. We enjoyed living and praying together, and we thank God for the beginning of the work of the Pilgrims of Saint Michael in South America.