“I left the diabolical world of finance”

on Wednesday, 01 August 2012. Posted in Testimonies

Testimony of Celine Akouete, an ex-employee of the Western African Central Bank 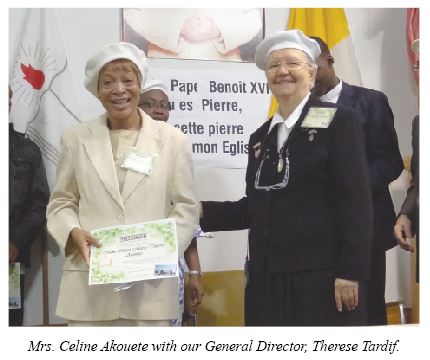 Excellencies, Miss Tardif, Mr. Marcel Lefebvre, Mr. Alain Pilote, dear Pilgrims of Saint Michael, dear brothers and sisters in Christ, permit me to express my joy by telling you that I am very, very, very happy to be amongst you this morning. I thank the whole team of Pilgrims, especially our very great pilot, Mr. Alain Pilote, who with great mastery, was able to give us high quality lessons, tinged with humor, on the present financial system and its disastrous consequences. He skillfully managed to convince us of the effectiveness of the cure. The unique therapy to apply to this seriously ill patient, the world of finance, to appease the pain from which it suffers. And this therapy, you all know it, is Social Credit.

I return to my personal experience, which will permit you to understand my testimony: I was part of another world. I am a pure product of the other world, the “diabolical” world, the world we are making “diabolical”. Its true! I am an economist. I worked for more than twenty years in a bank, WACB – the Western African Central Bank. I entered very young, upon examination, I was taught in their school, afterwards in the French Bank and after that, I took several training classes with the International Monetary Fund and the World Bank.

We were instilled with a mindset during our training called “the mindset of the Central Bank”. And it is true that to grow in this system, you must be a Freemason; be a member of the Illuminati; belong to the Rosicrucian, and who knows what else. It was in this system that I evolved, but I never became a freemason. They tried to co-opt me but they never succeeded. I do not belong to any circle or secret society because, as a little girl, I had already consecrated myself to the Immaculate Conception, to the Virgin Mary. That is probably what saved me. All those who are here, whether they be bishops, priests or laypeople, it is not by chance. We were all called; each one among us has received a call.

In fact, I was evolving in this system but I was not happy. I felt an emptiness inside me, something inside me was missing. I had everything I wanted, money, power – because it is exhilarating, especially when we begin to inspect banks, with the power to dismiss a Bank President, to have the power after verification of closing a bank.

All of this is exhilarating, but in one moment, the Virgin Mary put an end to all of this. Faced with the opulence of the bankers and the human misery that I encountered every day, one morning, I decided to leave, slam the door, and do something else. My parents did not understand me, nor did my friends. They all wondered what was going on with me. Why leave such a good position to go do something else? I left, and I found another employer in the person of the Virgin Mary.

When I was small, I was consecrated to the Virgin Mary. I later consecrated myself to the Holy Trinity, by means of the Immaculate Conception. Afterwards, I became responsible for the Mary Queen of Peace community, whose vocation is to pray for warring countries, for reconciliation, peace, the conversion of hearts, for love. We also do family apostolate. We pray for families, with families, we sometimes go door to door. Sometimes we bring our statue of the Pilgrim Virgin, Queen of Peace, into families who have problems and we pray for one week, two weeks, depending on the case. And we have had beautiful results.

My old colleagues laughed at me and told me: “You want to take care of the poor! How will you do it without resources?” You know, that world (of finance and banks), they have a thousand tricks in their bag to catch you. One of the directors of the big banks in the area called me and said: “You want to take care of the poor, but with what resources? I, I will help you. I will give you a project — all is already prepared: you will export rice from the sub-regions; we did a study of the market, it will bring in billions”.

I almost let myself be caught by telling myself: “Here is money to help me take care of the poor and to successfully carry through the Virgin’s work!” But, as I had a spiritual director, I spoke to him of it and he told me: “Be careful, you’ll fall into a trap. You cannot leave the world of finance to launch yourself into an operation that you did not study, and that is probably hiding something. Perhaps there are drugs beneath all of it, so be very careful; and the Virgin Mary does not need all this dirty money. Remain in prayer, and the Virgin Mary will find the necessary resources for you to take care of the poor.”

And see, my prayer was answered. I bless the day when I first met Father Gustave, and Mr. Marcel Lefebvre of the Pilgrims of Saint Michael because sometimes I put my little skills and my time at the disposition of Catholic Diocesan works of which Father Gustave Adou is in charge, one morning I found, on his table, a leaflet by the Pilgrims of Saint Michael speaking of the public debt and the poverty in the African countries. Immediately I was interested. I read the article, and I wanted to make contact with the Pilgrims of Saint Michael. When Mr. Lefebvre came to the Ivory Coast, I made every effort to meet him, because I was preparing a pilgrimage to Montreal, to Saint Joseph’s Oratory, where I was cured of a serious illness several years ago. The program for my pilgrimage had therefore changed: all the pilgrims would first come to Rougemont to attend the week of study. Unfortunately, only one person among the laity was able to obtain their visa. That is why I say that all who are here were truly called to sow.

As well as being responsible for the Mary Queen of Peace Community, in my parish in Abidjan, in the Ivory Coast, I am responsible for all the Marian groups. I am a member of the Parish Council, and I put my time and my skills at the disposition of the Church, and I give Catechism classes at the cathedral. Since I left the Central Bank, I am joyful, I am happy, and I lack nothing. I am happy with the little I have, with the little the Lord gives me, and I am completely happy.

What will be my contribution? First of all, when I return to the Ivory Coast, I will give a report to my pastor; I will make Social Credit known in my spiritual group and in other groups in the parish.

Secondly, it’s true, we demonize the bankers, we demonize the world of finance, but there are not only little devils in this world. There are also people who know what is happening, and who try to incite an awareness around themselves, but it is as if we were chained, because there is also the “code of silence”: when we leave this world (the Central Bank), you do not have the right to speak of all you have seen, all you have done, all you have learned, therefore we are kept silent.