How I Met Therese Neumann

When I was in second grade at Holy Name School in Springfield, Massachusetts, my teacher, Mrs. Kelleher, asked us each to bring in one of our favorite things to share with the class for Show-and-Tell. My “favorite thing” was my Dad, and my favorite thing about my Dad was that he was a good storyteller. This is the true story that he shared with my classmates on that day, of an event that changed his life: the day he met a saint.

I grew up in Lowell, Massachusetts, during the Great Depression. Those were very difficult times. There was not a lot of work and people were very poor. There were six of us children at home and my mother, a widow, was alone to provide for us. I remember one day some men from the state came to our home. They wanted to place the six of us in foster care, saying that our mother could never manage to provide for all of us by herself. But they were wrong! When Mamma realized what they had come for, she took her broom and chased them right out of the house! Those men never did come back and we never did go hungry either. Through all those difficult years our mother showed us that it was faith and trust in the God who always provides, that makes everything possible.

In 1943, with World War II already raging in Europe, my two brothers and I were drafted into military service. I tried enlisting with the Navy but the Department of Defense, not wanting to risk me shooting down our own planes because of my severe color-blindness, encouraged me to join the Air Corps instead. My sister, Marian, also enlisted with the Women’s Air Corps, which caused our poor mother to go prematurely gray! For the next four years, her Rosary never left her hands. We felt the strength of those prayers overseas. They were our consolation and hope for a safe return home.

My brother Arthur, or “Art,” was a graduate of West Point Military Academy in New York. He became a Colonel during the war, serving under General George S. Patton. At one point, he was put in charge of the Army moving into Germany from France and successfully “captured” many German towns, pushing the Nazis back. As their columns neared the small town of Konnersreuth, in Bavaria, Art was told about a young woman living there, whom everyone referred to as the “mystic.” On Fridays she would experience the stigmata. In this state, she would “return” to the time of Our Blessed Lord, nearly 2000 years ago, and re-live His Passion, Death and Resurrection, manifesting in her own body, the wounds of Christ. My brother wanted to meet her, knowing that our mother back home would most certainly want a full account of this phenomena.

Though the war had destroyed a good portion of the town, the people of Konnersreuth had somehow survived the many bombings. They were earnestly praying, entreating Heaven for an end to the war. So, when it happened that the Americans finally did arrive, the entire town came out to cheer and welcome them. This was when Arthur met Therese Neumann, the mystic he had heard so much about. He recognized who she was by the large square nail wounds in the palms of each of her hands. Therese was a rather shy person but very amiable. Art knew some German and was able to make himself understood and she talked with him for some time. He showed her a picture of his family and Therese told him that he should not worry, that he would return home safe to them. She also invited him to come back to visit her.

Not long after that, my brothers and I were reunited for a short visit. Art told John and me all about his meeting with Therese Neumann and, since Konnersreuth happened to be close by, we decided then and there to go pay her a visit. This was a day which I shall never forget. When we arrived in Konnersreuth we found Therese Neumann at her home. We walked with her through the town, meeting many of her neighbors. My brother John, an avid gardener referred to at home as “Farmer”, helped her in her garden, discussing gardening methods, flowers, herbs,…, and this, despite his inability to speak German. The three of us helped her gather flowers for the altar at her church, where we met her pastor, Fr. Josef Naber, who was also her spiritual director. He communicated many things to us about Therese’s special gifts and somehow, here again, we were able to understand despite the language barrier. After that, Therese invited us back to her home and introduced us to all her family. We sat down at their kitchen table and they served us a lunch of bread and goats milk. It was a very pleasant afternoon and we parted knowing that we had been very blessed that day.

I returned many times after that to Konnersreuth, bringing our Army Chaplain, Fr. Budnik and many of my comrades. Therese always seemed happy to see us and would patiently stop what she was doing, to greet us and laugh at the crazy things we soldiers would ask her. It had been told to us that Therese had not eaten anything since 1923! Nor did she drink, not even water! Every day she would receive the Holy Eucharist in Holy Communion and that was enough to sustain her. One day, as a few of us were talking with her and making her laugh, I tried to offer her an orange. Therese politely refused saying that she would not be able to keep it down.

My greatest thrill though, came when I was invited by Fr. Naber, to return on a Friday and witness the stigmata. I arrived early in the morning, in the pouring rain, and already there were hundreds of people there, waiting to see Therese. The visions usually began around midnight the night before, and would last until 4:00 pm on Friday. Everyone would form a line and file through her room, a few at a time. The slow moving line, consisting of Germans, Americans, civilians and soldiers — drawn together, despite the war — extended out the door of the Neumann home and to the opposite end of the town. I took my place with the others and we all prayed as we waited.

When I finally made my way into Therese’s room, I was totally taken aback. I did not even recognize her! She had streams of dried blood coming from each of her eyes and her head covering and her right shoulder were also covered with blood. I saw Fr. Naber standing next to her bed and he moved towards me. “She is on the cross,” he said. “Watch as they touch the sponge with vinegar and gall to her lips.” Therese leaned forward, then suddenly recoiled as she seemed to taste something very repulsive. I stood their for the few minutes permitted me, as so many were still waiting outside, and I heard her speak in a language much different than the German I had heard her speak. I was later told that it was Aramaic, the language that Jesus spoke. 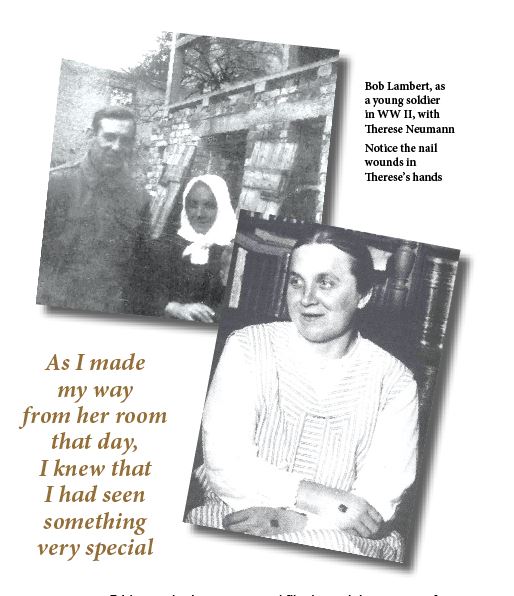 As I slowly made my way from her room that day, I knew that I had been allowed to see something very special. The Passion and Sufferings of Our Lord became very real to me and the memory of it carried me through the rest of the war. Therese, I was told, offered all her sufferings for sinners but most of all for priests. She loved priests and it was said that she always recognized who they were by their consecrated hands, even when they were dressed as civilians. Therese also had visions of the Resurrection and on those occasions, her face would glow as though she were looking into the sun.

After the war I gave many talks and handed out literature, and over the years I have handed out thousands of pictures of Therese Neumann. It is my sincere hope to one day see her named a saint of the Church, as her cause has now been opened in Rome and she is honored with the title, Servant of God. But for now, at the age of 93, I content myself with the assurance that I have a friend who awaits me, as I like to say, “over the veil.” v

There is no doubt that Therese Neumann was a great inspiration to my Dad. When in 1975, he met with the Pilgrims of St. Michael, he felt called to join them and for many years, he and his brother John, along with their close friend, Ralph Laurin, did a Rosary Crusade Apostolate “door-to-door” in the United States. Many remember these three courageous men going up and down the streets of New England —Massachusetts, Connecticut, New Hampshire, Maine, Vermont, Rhode Island, and even spilling over into Pennsylvania and New York— knocking on doors to ask those they met to join them in reciting a decade of Our Lady’s Rosary for world peace. Today his legs no longer permit him to go “out on the doors” like he used to but to friends and family he is always ready and willing to recount the many amazing experiences of his life. From his rocker by the fireplace he is still an inspiration to all those who come to see him. Therese Neumann probably never imagined how her generosity in accepting suffering would serve to inspire so much in others for years to come. —AMJ