Gilberte Côté-Mercier, deceased at the age of 92

She loved justice, and hated evil

Our venerable co-founder and General Directress, Mrs. Gilberte Côté-Mercier, passed away on Friday, June 21, 2002, at 9:15 in the morning, at 92 years of age, after a long battle for truth and justice that lasted 66 years, and after having suffered a painful Calvary.

Despite her painful state, she still wanted to give her conferences at the monthly meetings at the House of the Immaculate. She was there last April 28. She spoke standing up for three-quarters of an hour to her dear Pilgrims. And on May 26, when we were celebrating her 92nd birthday again at our monthly meeting, she made it all the way to the top of the stairs at the House of the Immaculate, but a strong angina attack obliged us to return her to her bed.

We celebrated her birthday as if she were there. But after, we brought her your Happy Birthday cards in which were written your bouquets of subscriptions, your spiritual bouquets, and the little note that each of the great apostles had written to her on the stage. We also brought her the three floral bouquets that were offered to her. She had them placed in her room so she could admire them. And every day, she read and re-read your cards. All this really cheered up the last days of her existence.

How much she loved us! Her heart had grown over the years, as the family of the “White Berets” grew. After our prayers to Louis Even for her, during our “Sieges of Jericho”, her eyes had gradually improved, and during the last months, she could read very well. Before leaving for the hospital, she was reading a book written by Blessed Marie Rivier, foundress of the Sisters of the Presentation of Mary. Two quotes from Sister Rivier had struck her, and she would repeat them to us: “I obtained all through the influence of the Rosary.” “Attach yourselves strongly to Jesus Christ as to your roots.”

The Oblate Fathers of Mary Immaculate, from Rougemont, were unequalled in their charity to her. They would come every Sunday, one or the other, to celebrate Holy Mass, especially for her, in our small chapel in the House of Saint Michael. What a signal grace for a sick woman who would soon present herself before God.

Friday, June 14, the Holy Sacrifice was celebrated for us at the House of the Immaculate. She came, despite the fact that, for the three previous nights, she had suffered greatly. The next night, her pains became so acute that she decided to enter the hospital. Her state worsened from day to day, and on Friday morning, June 21, her beautiful soul flew towards her Celestial Home. Her spiritual director, Father Gerard Montpetit, Oblate of Mary Immaculate, had prepared her well by administering the Anointing of the Sick to her and by bringing her Holy Communion. He assured her that, with these sacraments, all her faults were erased, and her soul had become white as snow. She could now, without fear, present herself before the God of Mercy, who is so happy to receive His repentant children.

For the last five years, she needed constant care. Florentine Seguin, a full-time Pilgrim for the last 47 years, was her guardian at night, and Diane Roy, a full-time Pilgrim for the last 26 years, helped her during the day. Our dear cook, Diane Guillemette, also contributed to taking care of the patient. These are the three ladies who were replacing each other in the hospital, day and night, during that last week. Friday at 4 a.m., Diane Roy telephoned us to warn us that her state of health was worsening.

Florentine Seguin and I, the two oldest collaborators, had the privilege of assisting her in her last moments. She asked us for her Rosary and for her crucifix for a happy death, this small crucifix that never left her and that she would show us often saying, “Here is the key that will permit me to enter directly into Heaven.” She held it firmly in her hands as she passed tranquilly away. She was also wearing her Scapular of Our Lady of Mount Carmel. After the recitation of the prayers for the dying, Miss Seguin sang softly for her in her ear the hymn: “I will go see her one day” and “it is the day,” she told her. “It is today!”

I, seeing her suffer, told her that I was praying to Padre Pio to come to ease her. She answered me, “He will not come.” I understood that he would not come to ease her, but instead to get her. I added: “Saint Joseph, in whom you had such a great confidence, is also here; he who always helped you during your life, will help you go to Heaven.” I sensed in her a relaxation created by her great confidence in Saint Joseph, Patron of a Happy Death. In the name of all the Pilgrims of Saint Michael and in my own name, I thanked her for all that she did for us and for the people.

Lying in state in the House of the Immaculate 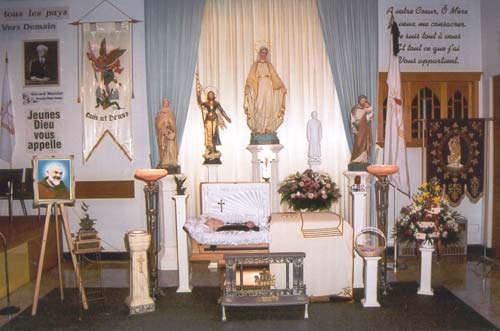 The venerable earthly remains of our dearly beloved co-founder were exposed in the great hall of the House of the Immaculate, before the statue of the Immaculate Conception, from Saturday, June 22, until Monday afternoon. The funeral took place in the beautiful church of Saint Michael of Rougemont at 2 o'clock on June 24; feast of Saint John the Baptist.

They came from everywhere to render her a last homage and to thank her. It was consoling to see all our good active Pilgrims of Saint Michael and a multitude of old Social Crediters, always faithful to the Cause, come to offer us their sympathies. Mrs. Lucien Parenteau came by plane from Alberta. Our Social Crediters from the United States, from Boston in Massachusetts, from Connecticut, from Arkansas, rushed up. All the regions of the province of Quebec, from Ontario and from New Brunswick, were well represented.

The Rosary was piously recited every hour. Beautiful hymns embellished the prayers. Mrs. Côté-Mercier taught us to say the Rosary; we recited it every day at the House of the Immaculate and at the House of Saint Michael. She herself did not miss saying her whole Rosary (fifteen decades) every day. To not forget, she would mark the Rosaries recited each day on a sheet of paper that we are preserving as a souvenir.

Gilberte Côté-Mercier deserved an imposing funeral, marked with dignity and respect, as the journalists remarked. We walked in a procession, from the House of the Immaculate up to the church of Saint Michael of Rougemont, while reciting the Rosary, which was amplified by loud-speakers that made the Ave's resonate throughout the whole parish. The melancholic sound of the bells made our hearts tremble.

Flags and banners of Saint Michael preceded the casket, as well as the banner of Saint John the Baptist and a photograph of Saint Padre Pio, whose birthday was May 25th, the same as Mrs. Côté-Mercier's. It was he, Padre Pio, whom I asked, on the day of his canonization, June 16, for the best grace for our dear Directress who was suffering so much. He granted her the grace of being delivered from the ills of this life, and of bringing her to Paradise.

The casket was followed by Mr. Michel Cote, nephew and godson of the deceased, and by his wife, Francoise. They were followed by the Full-time Pilgrims of Saint Michael.

Five priests officiated. Father Gerard Montpetit, Superior of the Oblates of Mary Immaculate of Rougemont and spiritual director of Mrs. Cote-Mercier, celebrated the funeral Mass, partly in Latin, as the deceased had desired. He was assisted by Father Jacques Chaput, pastor of Saint Michael's parish church in Rougemont, by Father Edmond Brouillard, O.M.I., Chaplain of the Pilgrims of Saint Michael; by Father Thomas Nadeau, Cistercian, Mrs. Cote-Mercier's confessor when she could still go to the monastery; and by Father Fernand Albert, from Caraquet, New Brunswick, a great friend and benefactor of the Work of “Michael”. Other priests would have liked to be present, but they learned the news of Mrs. Côté-Mercier's death too late.

Feast of Saint John the Baptist

When the banner of the Holy Patron of the French Canadians, carried in the funeral procession, entered into the church, the choir started signing a beautiful hymn in honor of Saint John the Baptist. The funeral then began with the “Requiem Aeternam”. And the Mass continued on in great beauty.

Father Jacques Chaput, the parish priest of Rougemont, really surpassed himself in eloquence in his homily. To begin with, he made the analogy between the prophet Saint John the Baptist, patron of the French Canadians, and Mrs. Gilberte Cote-Mercier, and then he compared the mission of our heroin with that of Saint Joan of Arc. It was truly impressive. All the Pilgrims of Saint Michael were consoled and comforted. One parishioner from Rougemont congratulated Father Chaput and assured him that his compliments towards Mrs. Cote-Mercier were well deserved. Father Fernand Albert was delighted, in congratulating Father Chaput of his homily; he told him that he had put everything in its proper place. The good words of Father Gerard Montpetit also touched the hearts.

Melvin Sickler, a full-time Pilgrim of Saint Michael and a talented organist, accompanied the magnificent choir which, by the sublime songs and hymns, gave us a preview of Heaven. The choir was directed by Mr. Leandre Lapierre from Saint-Odilon, Beauce. He was accompanied by Mr. Camille Fecteau and Mrs. Jean-Marie Gagnon, daughter of Mr. Fecteau, from St. Odilon also. The other singers were also all Pilgrims of Saint Michael coming from different regions; the choir loft was full. Lise Rodrigue, a full-time Pilgrim of Saint Michael, had made the program. 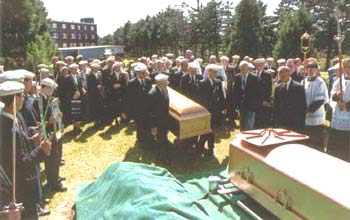 After the funeral in the church, the funeral procession wound its way to the cemetery of the House of Saint Michael, where the venerable body of our so-valued Directress was buried. Four priests came to the site to bless the casket and recite the last prayers.

In the name of the full-time Pilgrims of Saint Michael, Elie-Ange Fortin, a full-time Pilgrim for 46 years, bid a touching good-bye to her whom we considered to be our spiritual mother. He thanked her and assured her that we would continue the good battle, like she did, until our last breath. To end this moving ceremony, the strong and melodious voice of Yves Jacques, from Massachusetts, in the United States, once again sang beautiful hymns for us.

Good-bye, dear Gilberte Côté-Mercier, you have now rejoined your own in celestial felicity, your father, Rosario, whose premature departure caused a great emptiness in your life; your mother, Josephine, who always supported and assisted you; your brother, Rosaire, who loved you so much; Louis Even, the venerated founder; your spouse, Gerard Mercier, so dynamic in the battle; Juliette Lavigne, your first collaborator on the road and in the office; and the whole phalanx of Pilgrims of Saint Michael who preceded you to Heaven.

Your life was but a total gift of service to the truth and to justice, in the service of God and of Mary Immaculate. We are well resolved to walk in your footsteps until death. Continue to guide us from Heaven above, as you guided us on earth. We answer ‘YES’ to your last message: “Do not change your vocation!” We will join you soon in the Kingdom of the Father. You now contemplate the beauty of the Queen of Heaven and earth, the Blessed Virgin Mary. Joy engulfs us when we consider your happiness, despite the anguish caused by your departure.