Once and for all, it’s time to get at the root of Masonic influence and "secret" clubs

on Tuesday, 01 January 2008. Posted in Freemasonry

During the coming months there is bound to be major hoopla over a new book by Dan Brown, who wrote the blasphemous DaVinci Code.

This time, hopefully, it will not be such a tirade against the Church. It may be folly to hope for that.

But one beneficial thing it could bring into sharp relief is Freemasonry; any such light into that darkness is a benefit.

For rumor is that the novel — tentatively entitled The Solomon Key — focuses on the mysterious Masons and their secret influence, especially in Washington, D.C.

The book, claims one report, is "set to lift the veil on mysterious Freemason symbols carved into the very fabric of the historic streets and buildings of the U.S. capital."

Word is that the new adventure will be based in the heart of that city, "which could reveal some astonishing facts for history buffs."

If that is correct (and his new novel is not just another attack on Christianity), those "astonishing facts" may include what many believe is a Masonic link to the very way that the nation’s capital is laid out architecturally. An aerial view of Washington, many point out, shows a perfect square and the compass -- which are the universal symbols of Freemasonry. (See picture below.) 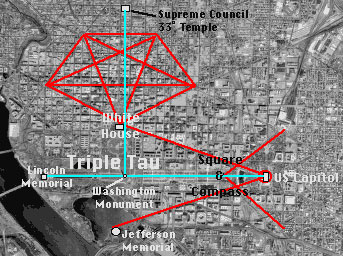 Is such simply a coincidence? We really don’t know. Perhaps no one does. George Washington is said to have demanded that the capital be laid out in a symbolic square. The shape of a square and compass is also formed by drawing a line on the map between two of the city’s major landmarks, the Capitol and the Lincoln Memorial, and along the walls of the White House and the Jefferson Memorial, notes the AFB news service.

"At the center of these stands the Washington Monument, a vast brick obelisk whose dimensions themselves are symbolic: 555 feet high by 55 wide (170 meters by 17).

"The number five is said to refer to the traditional five orders of architecture — which in turn relates to the Freemasons’ regard for geometry as a symbol of order, and of ‘the great geometrician’ — the supreme being," says the news item.

Inside the Capitol building, it further notes, "lies a cornerstone laid by George Washington himself, dressed in his ceremonial apron, in a Masonic ritual in 1793."

One could argue that the design of the capital is based more on neo-classical style -- the efforts to establish a new republic based on an ancient Roman republican model rather than anything that related to Freemasonry. But we are concerned with any social-spiritual group that excludes Jesus in the way Masonry does and that has initiation rituals which can be linked back to occultic Egyptians, Babylonians, and others.

Are Masons part of a larger scheme?

That’s something backed more with theories than evidence, but we are concerned with the obvious trend to build a world government and likewise are befuddled by the documented existence of secret groups that like Masons also include major political leaders.

We’re not prone to conspiracy theories, but why the secrecy? Why, for example, are there the Bilderberg Club, the Club of Rome, and the Bohemian Grove so clandestine? And why do they sometimes interweave?

It is time for all of this to come aboveboard and it is remarkable that the media has never touched it — perhaps until now. Will Dan Brown’s novel provoke a needed discussion?

It is time for us to understand the influence of the Bilderbergs, who meet each year in tremendous secrecy. Those meetings occur in Europe and the closed-door sessions involve about 120 business, government, and media leaders from that continent and also North America — including, often, presidential candidates.

Why the secrecy? This organization not only has enormous political cloud, but allegedly influences the Federal Reserve, the European Central Bank, and the Bank of England.

The goal, fear some, is to create a "world company" that will morph into a single world body of governing the masses for the benefit of a mysterious elite.

There is Bilderberg influence over the World Bank, the International Monetary Fund, and other bodies that affect us in ways we don’t understand.

It is time that we understood them. It is time too that we made our politicians explain this matter.

"The Bilderberg Group is not the end but the means to a future One World Government," writes one author, Daniel Estulin. "This organization has grown beyond its secretive beginnings to become a virtual shadow government which decides in total secrecy at annual meetings how its plans are to be carried out."

The ultimate goal, fear such writers, is to exercise hegemony over the world (starting with Eurasia) and bring about a globalized market place that would be controlled by the single government, policed by a United World Army, and financially regulated by a World Bank, with a micro-chipped population that is monitored and with life needs stripped down to "materialism and survival work, buy, procreate, sleep — all connected to a global computer that monitors our every move."

This would seem paranoid if there had not been such strides of late in introducing microchips (ostensibly to keep medical information), and if luminaries such as Henry Kissinger and the Rockefellers had not been attached to that or groups such as the Trilateral Commission.

It would also seem more paranoid if there was not such a push — as we clearly see in our time — for "one unified Europe" and now even "one unified North America."

Indeed, besides the curious opening of borders is the prospect of a super-highway that would unite Canada, the U.S., and Mexico. The seed of the union rests in passage of the North American Free Trade Agreement in the early 1990s under George Bush Senior (and then Bill Clinton).

Paranoia? Perhaps. We have to be very careful of these matters. Is it just the domain of "Illuminati" (and the "black helicopters")? Or do we now need to take a closer look at some of these fears?

Governor Rick Perry of Texas — a strong supporter of the trans-national highway — recently fueled such apprehensions by traveling to Turkey to attend — yes — the secretive Bilderberg conference. Meanwhile, former Mexican president Vicente Fox makes no bones about his support for North American unification.

Folks can go too far with such things (it seems unfair to proclaim the current President Bush as using the devil’s sign when he uses a hand signal that is really a cheer for the Texas Longhorns), and perhaps folks get overly wrought about another secret, Masonic-like group: the Skull and Bones Society, based at Yale, and with a number of leaders, including the current president, as initiates. Are we too concerned about the highly secret annual meeting of government, business, and diplomatic leaders at Bohemian Grove in California?

Whatever the answer to that question, we can say that such secrecy is no huge comfort and that it’s obvious we’re in an era where corporations are laying down the foundation for a single global entity, moving even into China (which is atheistic and who is ostensibly is our enemy).

How much of this is consciously designed, and how much is simply the momentum of our times, is subject to debate. There is a spirit, however, that is moving in the world, and corporations should be watched more than anything.

Will secret oligarchies and the powerful men behind the curtain soon see things to fruition?

Our masses have been hypnotized by cell phones, TV, and media that are owned by corporations that are becoming multi-national and often participate in elite organizations (at least in the case of Bohemian Grove, which like the Masons has a ritual with occult overtones).

However the Masons figure into all this (they are often given more credit than they may deserve), they have had their place as an example of secret initiate groups that seek to exert — and have exerted — influence.

The trend is growing. The groups are expanding. And there is certainly that overlap between various organizations. Small comfort there.

Whatever the influence of Masons in the architecture of Washington, it is a fact that a Masonic temple with its own architecture of sphinxes and colonnades dominates a corner of 16th Street near the city center —- one of a number of Masonic lodges in the capital and just a stone’s throw from the White House.

Oh, the webs that secrecy weaves.

Brown "had a contact with us but then cut it short," said Akram Elias, grand master-elect of Washington’s Grand Lodge. "We are all sitting around waiting for his book to come out but nobody knows what he’s going to say."