A Holy Year Dedicated to Mercy

Written by Alain Pilote on Sunday, 01 March 2015. Posted in Editorial 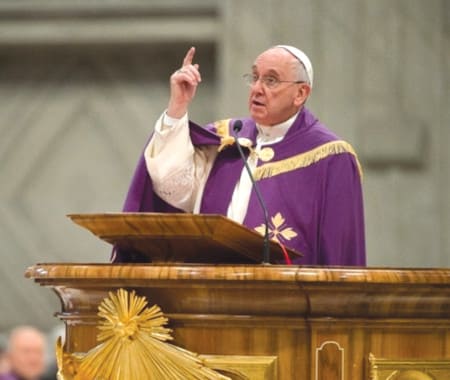 On Friday, March 13, 2015, at the end of his homily given during the penitential celebration held at St Peter’s Basilica, with individual confession and absolution, Pope Francis surprised everyone by announcing a Holy Year of Mercy. Here are the Holy Father’s words :

“Dear brothers and sisters, I have often thought of how the Church may render more clear her mission to be a witness to mercy ; and we have to make this journey. It is a journey which begins with spiritual conversion. Therefore, I have decided to announce an Extraordinary Jubilee which has at its centre the mercy of God. It will be a Holy Year of Mercy. We want to live in the light of the word of the Lord : “Be merciful, even as your Father is merciful”. And this especially applies to confessors ! So much mercy !

“This Holy Year will commence on the next Solemnity of the Immaculate Conception and will conclude on Sunday, November 20, 2016, the Solemnity of Our Lord Jesus Christ, King of the Universe and living face of the Father’s mercy... I am confident that the whole Church, which is in such need of mercy for we are sinners, will be able to find in this Jubilee the joy of rediscovering and rendering fruitful God’s mercy, with which we are all called to give comfort to every man and every woman of our time. Do not forget that God forgives all, and God forgives always. Let us never tire of asking forgiveness.”

One of the greatest accomplishments of Saint John Paul II during his pontificate was to dedicate the Sunday after Easter to Divine Mercy, as requested by Our Lord to a Polish nun, Faustina Kowalska, who was canonized by John Paul II on April 30, 2000. During his last visit to Poland, in August of 2002, during the dedication ceremony of the Divine Mercy Shrine in Krakow, John Paul II said the following :

”How greatly today’s world needs God’s mercy ! In every continent, from the depth of human suffering, a cry for mercy seems to rise up. Where hatred and the thirst for revenge dominate, where war brings suffering and death to the innocent, there the grace of mercy is needed in order to settle human minds and hearts and to bring about peace... Mercy is needed in order to ensure that every injustice in the world will come to an end in the splendour of truth... Like Saint Faustina, we wish to proclaim that apart from the mercy of God there is no other source of hope for mankind.”

With the news of wars, terrorist attacks, economic unrest, and of our own human failings, how very much in need of God’s Mercy is the world !

Yet, every day, this is what we ask in the Lord’s Prayer : “Forgive us our sins as we forgive those who have sinned against us.” This means that if we do not forgive others, God will not forgive us either...Something to be taken very seriously.

Misericordia, mercy, has two Latin roots : misere, misfortune and cor, heart and means therefore to open our heart to the misfortune of others. In Divine Mercy, it is Jesus’ Heart that comes to the rescue of man’s misery. To be merciful towards our fellow man, is to bring our heart closer to the misery of others.

One of the seven works of spiritual mercy is to instruct the ignorant. Thus, we carry out an act of mercy by reading and having others read MICHAEL since it teaches the ignorant, as well as the faithful, their rights and other topics they ignore, including the swindle of the present financial system.

Put otherwise : The disorder comes from our refusing to respect the order willed by God for His Creation and for the family. We worship money as though it were an idol, a god, when it should be a servant ; and humans are made the slaves of money.

Let us learn to be merciful, so as to become just in the eyes of God !