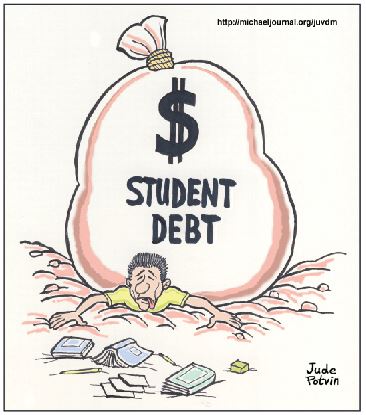 A nationwide financial disaster, like the iceberg that sank the Titanic, is sneaking up on Americans. At more than $1T, [trillion] it threatens to be as devastating as the foreclosure crisis. Older Americans, who worked hard all of their lives in the hope of a carefree retirement, could find themselves homeless, their savings confiscated, all because they wanted their children to benefit from a college education.

It’s all part of the ever-growing “Boomerang Generation.” Three in 10 young adults ages 25 to 34, 29%, now live with their parents – statistics last seen in the Great Depression. The vast majority are not slackers. They and their parents took out student loans in good faith, hoping the investment would pay off when they hit the job market.

This is shown by the huge numbers who paid the original loan – plus interest – many times over – only to find they still owe hundreds of thousands – or even millions – for a student loan of a few thousand.

Alan Collinge borrowed $38K for three degrees in aerospace engineering. Interest mushroomed all the time he was in school, so he owed $50K when he graduated in 1998. He was faithfully paying. However, when he was unable to come up with the whole amount of his monthly loan payment one time, his lender, Sallie Mae, hit him with a fee. They told him the fee was a one-time charge – but even though he continued to make his payments regularly – he was charged that “one time” fee – month after month – endlessly. The loan devoured more than 20% of his $35K-a-year pay. After Sept. 11, 2001, he was out of a job. His unemployment should have granted him forbearance, but Sallie Mae threw his loans into default. His debt soon rose to $60K. He was relentlessly hounded by collectors.

For years Collinge worked 90 hours a week and more to pay off a debt that was swelling from the original $38K to $103K. His lenders refused to negotiate. Outraged, he discovered his case was not unique, because “respectable” loan sharks could get away with anything.

His research revealed that millions of other Americans were trapped even worse than him, including doctors with millions of dollars of debt that forces them to charge exorbitant fees, because of a scheme by the government, the schools and the lenders that sucked in far more money from defaulted loans.

This obscene racket is made “legal” because “the best Congress money can buy” gave the loan sharks carte blanche to squeeze the last drop of blood from their victims. Lenders are exempt from “truth in lending” requirements, statutes of limitations, refinancing rights and even state usury laws. Congress has given collection agencies unthinkable powers to garnish wages, tax refunds, Social Security benefits – even disability income.

In despair, some ex-students have contemplated suicide – only to learn that their parents would be tormented and sucked dry by the lenders for the rest of their lives.

Reprinted with permission. Ralph Forbes is a freelance writer based in Arkansas. He is also a member of American Free Press’s Southern Bureau. Contact him at This email address is being protected from spambots. You need JavaScript enabled to view it..

Editor’s note: As readers of the MICHAEL Journal know, the scenerio that Mr. Forbes is depicting here is caused by a debt-money system that is spiraling out of control, a system that is plaguing every country on earth in the Western world, the problems that students are facing continue to become more urgent, (as evidenced by the many protests taking place in the educational field). Thus the real need for monetary reform through the implementation of Economic Democracy continues to grow every day. We encourage our readers to thus study the principles we outline in our articles on these issues.