Is it the end of the present financial system?

Written by Alain Pilote on Monday, 01 September 2008. Posted in Crisis

After the recent bank failures and unprecedented losses on the stock markets in New York and elsewhere, people are getting nervous: is it the end of the present financial system as we know it? Is the whole economic system on the verge of total collapse? The answer is definitely: yes… unless the present-debt money system is replaced with a debt-free money system, accompanied by dividends given to every citizen. 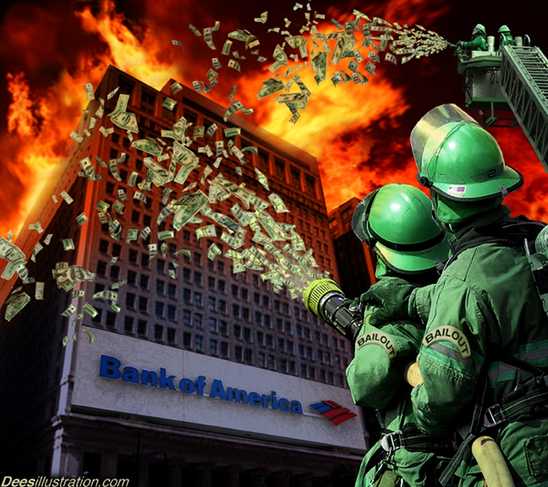 Throwing trillions of dollars at the banks won't save the system

The news media reported that banks made bad loans that could not be repaid and so they could no longer lend any money, and therefore needed to be “rescued” by governments. Financial authorities threatened governments by saying that if these bailouts were not approved, total chaos and the collapse of the entire economic system would ensue. So the U.S.A. voted in an unprecedented $700 billion rescue program, followed the week after by an even bigger rescue plan by Europe: $2,300 billion. Will this be enough?

No, throwing trillions of dollars at banks will never save the system, it will only delay its collapse for a few weeks. And if one studies how the present debt-system operates, these huge bailouts aggravate the situation even further.

The regular readers of the “Michael” Journal, and those who have studied the 10 lessons on Social Credit know that in the present financial system, all money is created as a debt in the form of loans. Commercial banks create the money they lend, but not the interest they ask in return. If one borrower succeeeds in paying back his loan, both the principal and interest, someone else must go bankrupt because, all together, we are not able to repay more money than has been made. If no money was borrowed from the banks, there would be no money at all in circulation. They only way to keep the present system going is to create more money… and therefore more debt. The time comes when this system reaches its mathematical limit, when even paying the interest on the debt is impossible: we have reached that point.

When one understands that to come into existence, all money has to be lent by the banks as a debt, these so-called government rescue plans are complete nonsense: governments have to borrow money from the banks to come to the banks’ rescue! Governments just get deeper into debt to the private corporations that have usurped the power to create money for the nation.

Those in charge of the present banking system know perfectly that there is no way these debts can ever be paid, and that we are heading for a dead-end, but this is precisely what they want: they create the problem to be able to then impose their own drastic solution.

As Clifford Hugh Douglas, the founder of the Social Credit school, said: “The Money Power does not, and never did, want to improve the money system — its consequences in war, sabotage and social friction are exactly what is desired.” Why? It is because the Financiers believe that they are the only ones capable of governing mankind properly. They want to bring every nation in the world to such a state of crisis that these countries will think they have no alternative but to accept the solution of the Financiers to save them from disaster: complete centralization, a single world currency, and a one-world government, in which all nations will be abolished, or forced to give up their sovereignty.

The real solution would be for each nation to be truly sovereign and issue its own debt-free currency, which would not stop commerce between nations, but even make it easier. But this is not what the Financiers want: they claim that for a global problem, there can only be a global solution (a single world currency).

David Walker, U.S. Comptroller General and chief of the Government Accountability Office (until March 2008) has said that the United States could no longer service its debt beyond 2009. As reported on the halturnernshow.com website, the plan is to intentionally bankrupt the United States to force integration with Canada and Mexico. Once merged, the U.S., Canada and Mexico would be a new entity called the North American Union. The U.S. Treasury will declare that the U.S.A. has to default its debt, the present U.S. Dollar will be demonetized (declared to be “not money” by the U.S. Treasury), and a new common currency imposed for the three merged countries: the Amero (just as there is the Euro for Europe). “Old dollars” will be devalued by ninety percent (90%): in other words, you will get only 2 cents on the dollar…

Since the Chinese presently hold about $2.3 TRILLION U.S. Dollars in cash from U.S. trade imbalance, the Chinese demanded and got billions of the new AMERO currency in advance of everyone else. The 20 AMERO coin shown on the picture was minted at the Denver Mint in 2007, which proves this collapse of the U.S. Dollar had been planned for over a year! Here is the choice offered by the Financiers: people will be left instantly, totally, destitute, unless they accept the merging of the U.S. with Canada and Mexico into something called the North American Union (NAU) and take the new AMERO currency for pennies on the dollar.

Is this choice acceptable (to have your present money devaluated by 90%)? Is there no other alternative? Yes, to apply the Social Credit principles, and guarantee enough purchasing power to every citizen.

Douglas predicted that the present debt-money system of the Bankers would become unworkable and fall by itself, because of all of the unpayable debts that it creates. He added that “a psychological moment” will come, a critical moment when the population, given the gravity of the situation, and despite all the power of the Financiers, will have suffered their debt-money system long enough, and will be disposed to study and accept Social Credit. Douglas wrote the following in 1924, in his book Social Credit:

“The position will be tremendous in its importance. A comparatively short period will probably serve to decide whether we are to master the mighty economic and social machine that we have created, or whether it is to master us; and during that period a small impetus from a body of men who know what to do and how to do it, may make the difference between yet one more retreat into the Dark Ages, or the emergence into the full light of a day of such splendor as we can at present only envisage dimly. It is this necessity for the recognition of the psychological moment, and the fitting to that moment of appropriate action, which should be present in the minds of that small minority which is seized of the gravity of the present times.” This moment is now!