Solving the problem of hunger through Social Credit

The Food and Agriculture Organization (FAO), an agency of the United Nations in Rome,, reported on September 11, 2013, that one-third of all food produced in the world is going to waste; $750 billion a year. Ironically, the emphasis of this report was mainly focused on the problem of pollution; that food waste harms the environment by causing unnecessary carbon emissions. It was also lamented that 30% of farmland, as well as volumes of water was being wasted as a result of this problem. Very little was even mentioned in the reports about the problem of people going hungry in the world.

According to some statistics, it would take only a small fraction of the $750 billion in wasted food in order to feed the 870 million people who go hungry every day throughout the entire world. Why, then, is there no general outcry demanding a just distribution of the more than 1.3 billion tons of food wasted annually?

This paradox of lack of food on the one hand, and the serious waste of food on the other, illustrates the real problem: the lack of money (purchasing power) in the hands of those who are hungry! We are confusing the means with the end. We have forgotten the true purpose of economics, which is to satisfy the needs of the population! Pope Pius XII, in his radio message of June 1st, 1941, stated: "Material goods have been created by God to meet the needs of all men, and must be at the disposal of all of them, as justice and charity require.“ Therefore, the real problem that we face is one of distribution.

As Louis Even put it: “This should be the goal, the purpose of the economy: to join the goods to the needs — and if this goal is achieved, then the economy fulfills its purpose. If it does not do this, or if it does it badly or incompletely, then the economic life has failed to fulfill its purpose, or it fulfills it imperfectly... To put it plainly, the economy is good when it is well regulated and it sufficiently fulfills its purpose. Namely that of: permitting food to enter the hungry stomach, clothing covering the naked body, shoes covering bare feet, heat warming the cold house in winter, the sick receiving medical care, children receiving proper education...

“The purpose of an economy is never solely for the production of goods, but for the purpose of producing goods that will be useful and needed. And in order for these goods to not remain on the shelves, but to be consumed by those who need them, the people will need money in order to buy the goods.”

The principle of subsidiarity and the dividend

In his first Encyclical letter, Deus Caritas Est (God is Love), Pope Benedict XVI wrote: "In God’s family, no one ought to go without the necessities of life... The aim of a just social order is to guarantee to each person, according to the principle of subsidiarity, his share of the community’s goods." This is why we need to change today’s economic system.

When our Lord performed the miracle of the multiplication of the loaves and the fishes, He was showing us that He is the one who provides. He creates what we produce and then tells us to distribute it. "Give them some food yourselves." (Mark 6:37) Pope Francis, in an audience in St. Peter’s Square on June 5th, 2013 said: “…the system continues unchanged since what dominates are the dynamics of an economy and a finance that are lacking in ethics. It is no longer man who commands, but money, money, cash commands. And God our Father gave us the task of protecting the earth — not for money, but for ourselves: for men and women. We have this task!” This is precisely the goal of a Social Credit economy — that money should become the tool in the hands of the citizens that will permit them to obtain the goods needed.

Saint Louis IX, King of France said: "The first duty of a king is to coin money when it is necessary for the sound economic life of his subjects." How can this be done? Louis Even had this solution; “Money should therefore be put into circulation (created) according to the rate of production and as the needs of distribution dictate. But to whom, you may ask, will this new money belong when it comes into circulation in the country? — This new money will belong to the citizens themselves. It will not be the property of the Government, for the Government does not own the country; they are the protectors of the common good. Nor will the money belong to the accountants of the national monetary organism; they simply carry out a social function, similar to that of a judge, and are paid for their services by society. No, this new money will belong entirely to the citizens.”

“New money must be created, and then also distributed, through a national dividend to each citizen, from conception until natural death, in order for him or her to buy the goods that exist and to satisfy their basic needs. Every man, woman and child, regardless of age, would then receive his or her share of this new stage of progress, which makes the new money necessary. This would not be money in payment for a job done, but rather a dividend to each person, representing his share in a common capital. Just as there exists private property, there also exists community property, that all possess in the same way. Money must serve, and not rule.”

One problem that arises in our economy today is that the producers and the retailers oftentimes lose profits when the prices are too low; for example, when there is an abundance of production and the prices go down. Producers prefer allowing the produce to be wasted, or even for the products to be destroyed, rather then sell them at a loss. The government even subsidizes farmers not to produce. In doing this, they are able to keep the prices artificially high, making up somewhat for their loss, however, at the same time, creating a sizeable amount of waste.

The solution that is proposed in a Social Credit economy would be rather to give a discount to the consumer, and then to compensate the retailer. This is referred to as the Compensated Discount and is done through the National Credit Office, based on an equation — the total sum of prices equaling the consumers’ available purchasing power. This would truly be an economic democracy, since the consumer would then have enough money to vote on the goods that they need, allowing, at the same time, the possibility to favor the smaller businesses, the family farms and local artisans, because the artificial obstacle of finance would now be eliminated. In other words, the goal of a financial system should be to satisfy the needs of the whole population.

Yes, this waste of the world’s food must stop, but not to the detriment of the poor! As we saw in the Miracle of the Loaves and the Fishes, Our Lord showed us that the earth’s resources are a gift from God. This gift must be appreciated and respected and, yes, of course, not wasted! Our Lord Himself, after telling the Apostles to distribute, He then told them to gather up the leftovers, “…and they picked up twelve wicker baskets full of fragments and what was left of the fish.” (Mark 6:43.) This food that was not eaten, was not wasted! It must have been gathered in order to feed others, those who had not had the good fortune of being there on that hillside on that afternoon.

“Wasting food is like stealing from the poor,” said Pope Francis on June 6, 2013.

For more detailed information, please read Chapters 5 and 6 in the book, “The Social Credit Proposals Explained in Ten Lessons”, by Alain Pilote and available on our website: www.michaeljournal.org 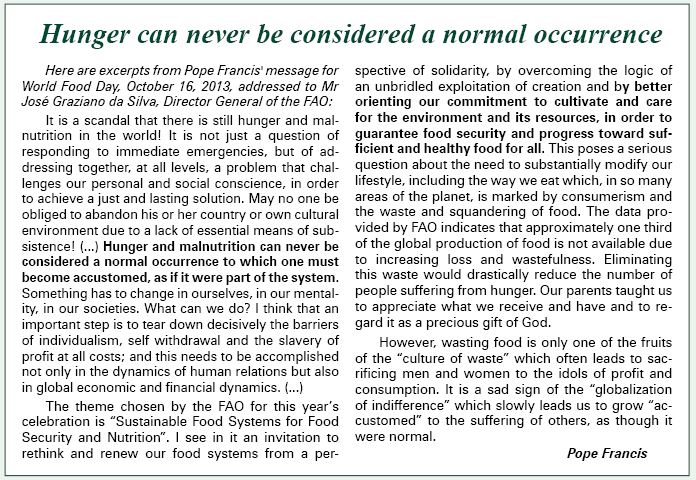