Global Control through the RFID Chip

Written by Yves Jacques on Thursday, 01 October 2009. Posted in Microchips

Total Surveillance and a Cashless Society 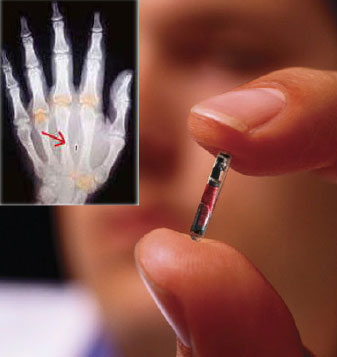 These current economic and social crises are leading to a global, financial "melt down" that the powerful global elite are using in order to establish a Global Financial Economic System. This will give centralized power to the United Nation’s International Monetary Fund and the World Bank, creating a type of "Global Federal Reserve System". This is setting the stage for a cashless electronic currency with a high tech surveillance RFID (Radio Frequency Identification) chip implanted under one’s skin.

The Global Elite, blinded by their thirst for power, orchestrate obtaining total control over the people in the excuse of providing for more transparency; a greater surveillance of the world financial markets, cross border firms, money laundering, terrorist financing, etc…

They believe that they are the only ones capable of governing mankind properly. However, these globalists know very well that people will not easily give up their freedom of the use of cash to accept these "bio-chips" unless there is a worldwide panic, be it financial or maybe even flu pandemic to convince the population that the only way not to lose everything is to accept the RFID chip.

Recently in September of 2009, VeriChip Corp., one of the largest producers of the RFID Chip, obtained an exclusive license to two patents. These patents held by VeriChip partner Receptors LLC, relate to biosensors capable of detecting the H1N1 and other viruses and biological threats.

The Global Elite have been working on this project for many years. In April of 1998 the feature article of Time Magazine reported that, "in the future, money will be stored in the laptop, in the debit card and even (in the not-so-distant future) in a chip implanted under the skin." This technology is now available and is already being applied on human beings around the world.

Patrick Redmond, author of the book, New Technologies – A Hidden Danger, who worked for IBM until 2007, explains the RFID chips: "They are Radio Frequency Identification devices. An RFID is a microchip with an attached antenna. The microchip contains stored information which can be transmitted to a reader and then to a computer. RFID’s can be passive, semi-passive or active.

"Active RFID’s have an internal power source such as a battery. This allows the tag to send signals back to the reader, so if I have a RFID on me and it has a battery, I can just send a signal to a reader wherever it is. They can receive and store data and be read at a further distance than the passive RFID’s. The batteries used can only last a short while. But the current batteries in the RFID’s can last for over a hundred years, because of their self-generating power."

In 2007, Hitachi introduced the world’s smallest RFID chips which measure just 0.05 x 0.05 millimeters. Compare this with the new powder-type RFID tags which measure about sixty times smaller. These ‘’powder" RFID’s, like their predecesser, have a 128-bit ROM for storing a unique 38 digit number.

According to Mr. Redmond, "The chip in the National ID card has not only a number, but also a person’s work history, education, religion, ethnicity, police record and reproductive history."

Wal-Mart, Best Buy, the U.S. Military and many other agencies around the world, are already implementing the use of RFID chips. In London, police authorities announced that they were putting RFID chips on the entire police force. In Shenzhen, Southern China they are implementing RFID readers to track the movements of citizens: "all citizens have an ID card with a chip so that they can identify who is in what part of the city at any point in time." Nigel Gilbert of the Royal Academy of Engineering said that by 2011 you should be able to go on Google and find out where someone is at any time from chips on clothing, in cars, cell phones, and also in people.

These RFID Chips will be at the same time; your money, medical monitor, license, passport, anti-terrorist solution, locator for lost children or Alzheimer patients,...etc. These RFID’s inside your body will be read by readers which connect data to cell towers through the SensorNet project with technologie capable of also drawing information from your body; for heart monitoring, blood pressure, your whereabouts…etc.

This may all sound very helpful but, at the same time these chips, when implanted in the body will have the ‘’input" capacity for brain functions such as mind control, language, and memory, making it possible for a super surveillance of mankind across the globe, thus compromising our free will.

The SensorNet project will integrate nano, macro and conventional sensors into a single nationwide network that will feed back to an existing U.S. network of 30,000 cell mobile phone masts, forming the skeleton of an unparalleled national surveillance network.

Michael Mehta, a sociologist at the University of Saskatchewan (Canada), believes that the environment equipped with multiple sensors could destroy the notion of privacy altogether – creating a phenomenon that he calls "nano-panopticism" (i.e., all seeing) in which citizens feel constantly under surveillance. This is the "all-spying eye" of the Illuminati, in the New World Order.

Another factor would be the buying and selling of goods. In the past there was no way of controlling these activities on such a large scale, but now it is technically possible through electronic money, an RFID chip implanted under the skin of every inhabitant on earth.

St. John, in the Book of Revelation, 13:4/16-17, writes: "And they worshipped the dragon because he gave authority to the beast, and they worshipped the beast, saying, "Who is like the beast, and who will be able to fight with it?... And it will cause all, the small and great, and the rich and the poor, and the free and bond, to have a mark on their right hand or on their foreheads, and it will bring it about that no one may be able to buy or sell, except him who has the mark, either the name of the beast or the number of its name."

Therefore, to receive the mark it will be necessary to renounce Christ and swear allegiance to the beast. St Pius X in his Encyclical ‘E Supremi Apostolatus’ of Oct. 4, 1903 states, "In the distinguishing mark of Antichrist, man has with infinite audacity put himself in the place of God, raising himself above all that is called God; he has despised God’s majesty and, as it were, made of the universe a temple wherein he himself is to be adored."

We need to open our hearts to the Truth of the Gospel and not let ourselves be deceived by the horrific misuse of this technology. We need to safeguard our freedoms by using all technology to serve each man, woman and child without any invasion of privacy. We need to embrace once again the faith of our fathers in communion and solidarity, recognizing that we are all God’s children and made in His image and likeness.

"For God formed man to be imperishable; the image of his own nature he made him. But by the envy of the devil, death entered the world, and they who are in his possession experience it." (Book of Wisdom 2:23-24)

Let us shine forth with the light of Truth, exposing the deceitful lies of Satan and his minions on this created financial crisis. The sovereignty of all nations has been undermined in order to bring about a global economic system with a new one-world electronic money.

Whether we go into this century as an electronic global police state or as free human beings, respecting the dignity of each human person; will all depend on the active role that we take now. Let us, at all costs, preserve the rights and the freedoms of the people, imploring God’s mercy for each individual nation, so that we may always recognize the kingship of Christ over us and that His seal of Unity and Hope be impressed upon our souls.