Money has become a god

Written by Louis Even on Friday, 01 May 2015. Posted in Social Credit

If you were on a battlefield today, you would not be surprised to see tanks mowing down human beings. It would be horrible to witness, but you would have to admit that these machines are serving the very purpose they were created for. The tank was made to spit out shells, not to bring people to Mass.

However, if you see, in a street of your town, cars heading straight for pedestrians, even chasing them onto the sidewalks to run them down, you would find this spectacle even more revolting than that of the tanks on the battlefield.

Diverting something from its proper purpose is a perversion — and the more perfect the thing is, the more criminal is the perversion. 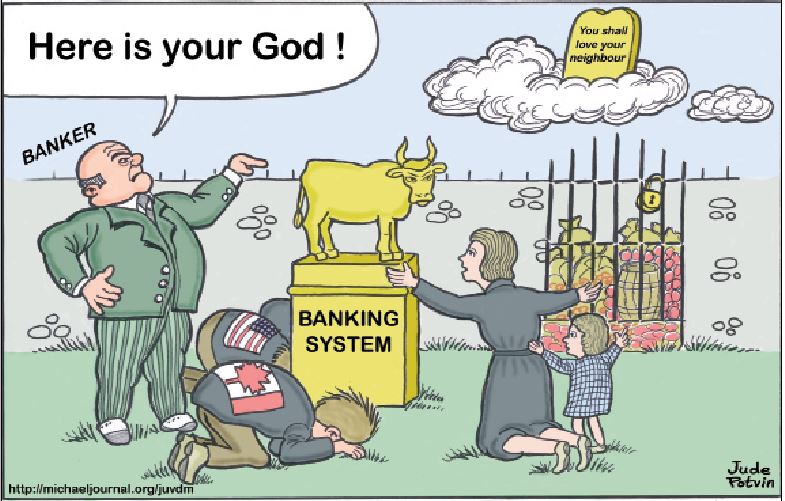 This perversion has corrupted the whole economic life. Money has been imposed upon man as a god, in a deeper and more extended sense than what is generally meant by the most eloquent preachers.

Money has not only become the god that the avaricious person adores by contemplating his gold or bank account, money has become an exacting and tyrannical god which all our economic activities must serve. Money has become the necessary condition and purpose of every business which should instead be conceived and oriented to serving human needs.

A field is tilled if it will yield a large income. If not, it is left fallow, even when many arehungering for its fruits or produce.

Shoes are made if it is a paying proposition. If not, even if there should still be people without shoes, the production of shoes is stopped. As long as there is money “in it”, even if all have shoes, production is continued.

The same hands, the same brains, the same entrepreneurs will shift from one production to another, from one business to another, if the first one is not profitable, and the second is: tractors today, artillery guns tomorrow; nourishing food today, junk food tomorrow, depending only on the profits that each brings.

The worker, like his boss, is subjected to the service of this same tyrannical god. He goes where there is a wage, be it in home construction or in war industries. Assuredly, it is his daily bread that he seeks. He must seek his livelihood to support his wife and his children, where money will be given to him at the end of the week for his work, regardless of the type of work he is asked to do — work of life or work of death. Can he really even worry about this when, most of the time, he does not even know what use will be made of the products of his work? The lumberjack in the forest, the chemist or worker in the paper mill, work there for the money they are paid; they cannot influence in any way whether the paper produced is used for printing pastoral letters or portnography. The worker’s responsibility does not go further than the pay check.

We do not put the blame on the worker. He is but a slave condemned to serve the production of money; otherwise, he will die of hunger, along with his family.

This god does not only claim supremacy in economic decisions. But like Moloch of the Ammonites or the Minotaur of the Greeks, it needs human victims. We can’t count its victims. Its behavior can halt all productive activity, paralyze the distribution of products, throw millions of human beings into starvation and privations of all kinds despite an abundance of available products. This malicious god seems to take its greatest pleasure accumulating vast inventories of goods in front of families with the most desperate needs but no means. The millions of unemployed people, and the millions more “working poor” know this experience.

It is a god with a formidable power, but also a god of discord, of divisions, of conflicts. Pitting the one against the other: employer and employee, seller and buyer, landlord and tenant. What creates quarrels among couples? What disperses the members of families because the home is nothing more than a hovel or a couple of rooms? What is the subject of four-fifths of the court cases?

It is this tyrannical god, this control over our lives, as much in the private sphere as in the public sphere, that the Social Crediters want to overthrow.

They do not want to suppress the money system, but rather to restore it to its role, its proper function, which is to serve, and not to oppress. 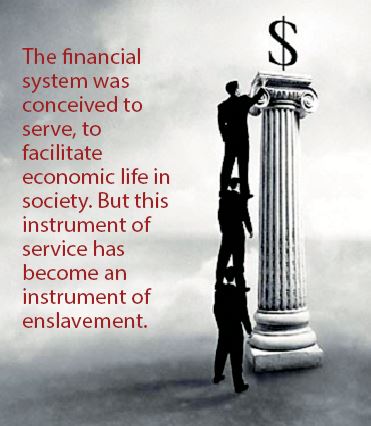 Like every idol, this mighty god is an artificial creation, a man-made god. Its artificial nature was shown before the whole universe in September 1939. As soon as World War II was declared, people saw money suddenly appear out of nowhere by the millions, by the hundreds of millions, after ten years of an artificial universal money shortage.

And not one single time, during the six years of war, was a government ever heard to declare: “Fighting will have to be stopped, as there is a lack of money.” This never happened! Only the resources in men and materials mattered.

Overnight, the unemployed people who had been left to die in their hardships, were now avidly sought to become soldiers or ammunition producers. The millions, the billions to pay, would come as fast as the multitude of soldiers and the capacity to produce armaments for this worldwide slaughter.

To come, after that, and talk about a problem of money, when there is no problem of production, is a lie that must be unmasked by all of us.

If money could come so quickly for the goverment as a wartime consumer, money can equally come as quickly for individuals as peacetime consumers. There are no technical difficulties in this. It is a question of deciding.

It is absurd to see cities or provinces obliged to forgo necessary and physically feasible developments under the pretext of insufficient funds. It is absurd that public bodies, like city councils, must run their population into debt to those who produce nothing so as to obtain permission to employ workers and materials which are otherwise left idle.

At the service of distribution

The financial system should exist to distribute goods. This consists in putting prices on the goods, then distributing the purchasing power to the individuals, who choose among the goods those which correspond to their needs. The prices and purchasing power must be balanced, otherwise the distribution will not occur.

The present, way of distributing purchasing power cannot guarantee everyone a share in earthly goods, because it links the right to goods almost exclusively to employment. Not everybody is employed. Automation tends to diminish employment, while at the same time increasing production.

If a product can be made without the presence of human labor, the claim on the product must also come without the need of being employed.

To maintain the necessity of being employed in order to have the right to live, when the inventions, the machines, the improvements in the manufacturing process, have precisely as a goal to save or reduce labor, is to make progress in society a punishment instead of a liberation.

Social Credit offers the solution. No other adequate solution has ever been advanced.

The various social programs admit by their very existence, that the distribution of the rights to the products is badly organized, but they do not correct the cause of this ineffective distribution, rather they allow it to continue, while at the same time trying to palliate its effects.

As for Social Credit, it would correct this defect in distribution. It would distribute a national purchasing power corresponding to the national production; and, by a dividend to all, it would ensure each individual a share at least sufficient to obtain the essentials.

Social Credit corrects the cause of the economic disorder, instead of uselessly trying to patch it.