The Pilgrims of St Michael and Social Credit 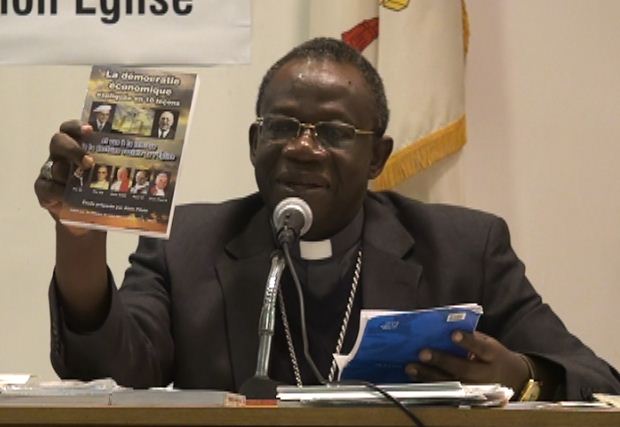 Last March, at our latest week of study in Rougemont, Canada, on the social doctrine of the Church and its implementation (based on Alain Pilote’s book The Social Credit Proposals Explained in 10 Lessons), we had two bishops from the Democratic Republic of Congo, including Most Rev. Bernard Emmanuel Kasanda Mulenga, Bishop of the Diocese of Mbuji-Mayi. Here is the testimony he gave:

I have already told you how delighted I was and happy to have met you. And I am very grateful for all the work that is being done and that which was done by Alain Pilote. I strongly recommend that this book, Ten Lessons on Social Credit, be distributed to the people you wish to reach. I think this book says it all.

Let me share with you a phone conversation I had this morning with the archbishop of Ottawa. He knew I was in Rougemont and he enquired about the object of my visit. I said I came to attend a week’s seminar on the social doctrine of the Church and on Social Credit.

He asked: “How many Bishops are there?”

I said: “We are two Congolese Bishops.”

Then he asked: “Was there any mention, did you talk about the Pope’s latest Encyclical letter (Caritas in veritate)?”

I said to him: “Yes indeed! It is really a course based upon the social doctrine and the Magisterium of the Church but in relation to the intuition of how to cancel debts, how to function without a debt-money system to avoid debts, public debts and debts as a whole. And also, how to allow people to consume all the goods and products they make. I gave him a very short summary, but I do believe that sending him a book like this (The Social Credit Proposals Explained in 10 Lessons) could do much to appease him and to, why not, charm him!

Thus I am very happy. I am returning home and I will study further. I hope that tomorrow, we will recapitulate what we have learned today, as good students together with our teacher. We will go over some of the material but this is a book to study in depth. And I believe that all has been said or that much is written in this book.

In his lifetime, Mr. Louis Even spoke up as few people have: visionaries who understand and who see far ahead into the future. And once they have seized the reality, nothing stops them from going to the very end; nothing. They must push forward with the idea. They remain steadfast, “the great tenacious apostles”, as you call them.

Mr. Even persevered. He went to the end. And I am impressed by his having spent forty-five years in your organization after beginning in 1934-35 as you have mentioned. These were outstanding people.

How delightful! Added to the pleasure was my meeting all of you. Different faces with highly diverse experiences. And I wish to keep in touch with you. To keep in touch also with your other distinguished guests whom I was able to meet. I truly enjoyed their approach and their vision of the world and thoughts on economic reality.

Here is how I met the Pilgrims of Saint Michael. It is through Mr. Marcel Lefebvre who came to my Diocese of Mbuji-Mayi. This story includes Bishop Nestor Ngoy (of the Diocese of Kolwezi, also in the Democratic Republic of Congo, who came to the “Michael” Congress in Rougemont, Canada, a few years ago) and Father Albert Kaumba, also of the Diocese of Kolwesi, who accompanied Mr. Lefebvre in his tour in Africa. Bishop Nestor is attached to our diocese for some special events. There is a Marian Shrine he cherishes, the Shrine of Our Lady of Fatima. He often comes to pray there. With the team of people who organize the pilgrimages at the Shrine, including its rector, Msgr. Placide Mukendi (vicar general of the diocese of Mbuji-Mayi, who came to Rougemont in 2009). Bishop Nestor has kept in touch with us. Thus it is that through his priest we learned of the existence of this Movement, the Pilgrims of Saint Michael with the message that they spread, it could only pass through his diocese in order to reach us.

Only recently, in February, as part of the permanent education of priests, Msgr. Placide gave a conference entitled “Social Credit, an efficient way to fight poverty.” He had to bring the light to those who did not know Social Credit in our country, or the Pilgrims of Saint Michael and Mr. Louis Even. And he had to bring on a new way of looking at things. This took place last February. So it is still fresh in our minds.

I personally believe and hope that with your help we will see our diocese relieved of poverty thanks to the implementation of the Social Credit principles, which you so rightly call “Economic Democracy.” It will not be easy, but we will seek together how we can organize ourselves to spread this idea. The main goal is not to act rapidly but first to understand thoroughly what it entails. With local input we may obtain better results. We receive the intuition and then we make it part of our own culture, as Mr. Francois de Siebenthal said, we must take it a step further with this idea.

I have given some thought and I have shared with the directors my wish to have a priest to whom I have entrusted a great responsibility in our finances, though he is not an economist, but I would like him to create money with the people. This is what I want done. I would like him to come and listen to our side and to see how things are done. His name is Joseph. I believe he will come.

The work you do is that of apostles. I greatly appreciated your testimonies of yesterday. (The the “Michael” staff who go door to door to solicit subscriptions to “Michael”.) The ladies who stood before us and who told us in simple words about their work. It is worthy of admiration. More so since you carry within you what I would call two hats. Under your white beret, you have two hats hidden. You have first, a social theory that is true and which must transform society but you also have on the other hand, faith. The faith which gives you the strength to carry out your work.

In faith, many things can be achieved. You have gone through moments of uncertainty in the work you had to accomplish. You have headed into the unknown not knowing what awaited you. You have left and, as Mr. Migneault would say, found yourself with a ripped necktie, attacked by dogs. You have lived through moments, through situations that had to be dealt with; armed with faith, the faith in God.

And in this we are one in our faith as apostles of Jesus. I believe this and I have repeated it during my trip here, to all who would listen: in the structures I am giving my diocese, in their organization, I rely upon three important realities that make up the pillars of a single dimension, of a single reality: faith in God, faith in myself and faith in others.

Faith in myself: when I speak, when I set out to work, I do not hesitate. I begin by having faith in myself. I say to myself: “I will act, but it is in the name of God that I do so.”

And thirdly, faith in others: others whom I meet, towards whom I move. And among these other people, there is the Virgin Mary: faith in the Virgin who holds us by the hand, who carries and protects us. Faith in others who are there as collaborators with whom we can go further.

What more could I hope for, more important, more precious than this, to carry through the work the Lord gives me in my vocation. And you, as apostles, as apostles of Jesus Christ, I wish to tell you that the deeds you have to accomplish might at times exact a lot from you. But do not give up for when we speak of faith we speak also of Satan who is at hand doing his work. He is there, he fights you. He is there to disorganize you. He is there to inspire in you a distaste for your work. But stand fast! The Lord Jesus said: “Fear not; take heart! I have conquered the world.” And the Lord will overcome, you are but His instruments. You are but the tools He uses.